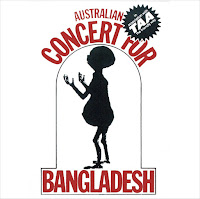 Australia’s Daddy Cool scored a big home hit in 1971 with sub-Stones strut "Eagle Rock", which soon became a wedding party staple. Four years later when they headlined The Australian Concert For Bangladesh at Melbourne’s Sidney Myer Music Bowl. Daddy Cool were about to be consigned to the oldies bin by the band which was sixth on the bill that day,  AC/DC.

AC/DC had been propelled locally by teenage Sharpie fans, a group of whom are seen here stepping out with a mickey-taking version of the Eagle Rock boogie which mutates into their dance, The Melbourne Shuffle.  Bon arrived again dressed as a schoolgirl, seemingly unconcerned that his makeup would run in the rain that tumbled down that day. Though the attendance was affected by the poor weather, most waited until after AC/DC played before leaving.    AC/DC played a 45 minute set while on their 1975 "High Voltage" Australian Tour. Several tracks later aired on ABC's 'GTK.' but have yet to appear on YouTube. [As far as I know, there are no official or Bootleg recordings of their performance either].


Sharpies were the Australian mod-skinhead-casual hybrid from Melbourne’s working class suburbs with a tough and stylish look and an outsider stance. Check out the moves, the knits, the Connys (cardigans), the feather-cuts and the cinch-backed Oxford bags in the video clip above, during Daddy Cool's "Eagle Rock".

Australian Sharpies pre-dated American S.H.A.R.P.S. (probably by 10-15 years), but in the USA, a "S.H.A.R.P." is an acronym for "Skin Heads Against Racial Prejudice" (opposite of "neo-NAZI" skinhead). The Sharpies were working class and dedicated to their appearances and wild lifestyles. They also danced their own version of the Australian Stomp, a dance that originated in Australia in the surf clubs of the 60s and was developed into a more intensive form by the Sharpies.
[extract from paulgormanis.com] 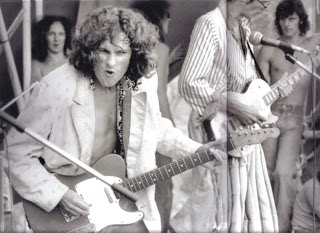 The two Ross's started out in the Pink Finks in 1965. They formed a partnership that lasted until they formed Daddy Cool with Wayne and Gary, who had worked together in the Rondells.
Their first appearance was at the T.F Much Ballroom (aka Too Fucking Much Ballroom) in Melbourne in November 1970. From there they took the dance and disco circuit by storm with their vintage rock'n'roll, outrageous acts and ostentatious outfits (which included a towel and bathing cap, Mickey Mouse ears and an Archie-style cap complete with a propeller). 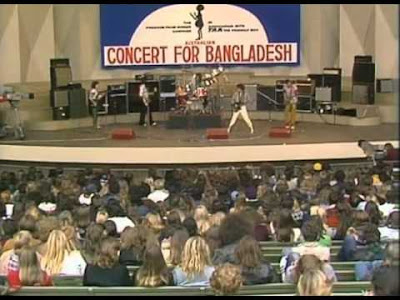 In May 1971, they released their first single, 'Eagle Rock' (written by Ross Wilson), backed by 'Bom Bom' (written by Wilson & Hannaford).  The record entered the Melbourne charts at number twenty after only ten days in the shops. It went on to become the best selling Australian single of the year. On conquering Melbourne, the band set off on a hectic tour of all the capital cities. In July their debut album, Daddy Who? . .. Daddy Cool, was released. 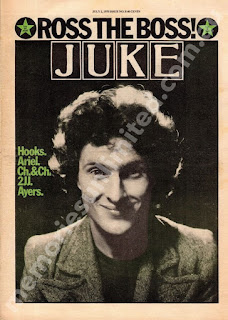 The band was also voted Australia's best group of 1971 in the national Go-Set Pop Poll. This was quite an achievement when you consider they had only been on the scene for six months and had had to contend with competition like Chain, Zoot and Masters' Apprentices.

Meanwhile, their album was selling like wildfire, with radio stations programming all or most tracks. By August it had gone gold and, of course, the single had already achieved gold status within eleven weeks of its release. Also in August, the band took its first step toward international recognition when they set off for the US to play at the Whisky A Go Go in Hollywood. The gig was a success. As a result they were offered more concert dates later in the year. At the same time, 'Eagle Rock' was released in the US on Warner Brothers.

Disbanding in 1972, the band eventually reformed in 1974/75 to play at the Sunbury Festival, this Benefit Concert for Freedom from Hunger and finally at the Prahran Reefer Cabaret, before calling it quits again in September, 1975. 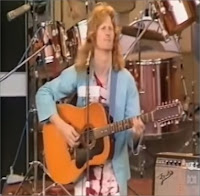 Phil Manning
Apart from Erol Flynn, Phil just may be the only truly notable export of Tasmania. He emerged from the Apple Isle as a gangly, youthful guitarist hopeful around 1966 and made his way to 'discotheque city' - Melbourne. There he became gainfully employed as a member of The Blue Jays and The Laurie Allen Revenue before being taken on as lead guitarist by ex-Brisbane blues outfit The Bay City Union.

After one single, Manning linked up with Perth blues band The Beaten Track, late in 1968. This outfit evolved into Chain early in 1969, with the addition of ex-James Taylor Move vocalist Wendy Saddington. 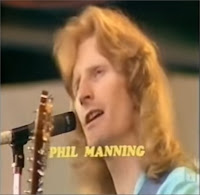 Phil Manning remained the mainstay of Chain from 1969 to 1973, as some of Australia's finest rock/blues musicians passed through its ranks. Chain's January 1971 single, "Black and Blue" reached the top 20 on the Australian Kent Music Report Singles Chart. Manning co-wrote the song with fellow members Harvey, Sullivan and Taylor. They had a second top 40 hit with "Judgement" issued in July. Also in July, teen newspaper, Go-Set published its annual popularity poll and Manning was voted at No. 3 for 'Best Guitarist'. The related Chain album, 'Toward the Blues' followed in September and peaked in the top 10 on the Albums Chart. Manning has returned to Chain periodically for performances and further recordings, while contemporaneously maintaining his solo career.

His name became synonymous with BLUES, of the finest integrity and quality. A lucid, flowing style of blues guitar endeared him to serious rock fans and enabled him to win countless guitar polls throughout the late 60's and early 70's. When Muddy Waters Blues Band visited

After Chain finally breathed its last, Manning passed through a variety of relatively unsatisfying formations, such as Pilgrimage, Friends, Might Mouse and Band Of Talabone. Signed to Mushroom Records as the Phil Manning Band in 1975, he began to re orientate his direction to a more straight forward rock vein and released his debut solo album, 'I Wish There Was a Way', on Mushroom Records and Festival Records. Australian music historian, Ian McFarlane, described the album as in a "mellow, reflective singer/songwriter mode". The album spawned two singles, "Love Is the Mender" in December and "I Wish There Was a Way" in March 1975. 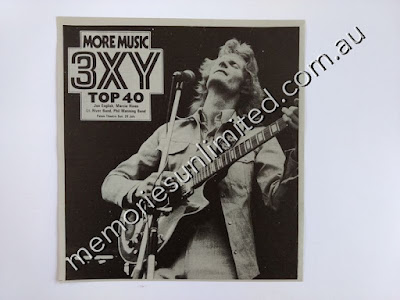 In May, he formed the Phil Manning Band with Greg Cook on guitar and synthesiser (ex-Cam-Pact, Mándu Band), Bruce Devenish on drums and Eddie McDonald on bass guitar (ex-Bakery). They recorded the pop single "Train to Ride" which was issued in October. However, in September the line-up had changed to Steve Cooney on guitar, Tony Doyle on drums and Paul Wheeler on bass guitar (ex-Billy Thorpe and the Aztecs, MacKenzie Theory). The group disbanded in March 1977 and Manning joined John Paul Young's backing band the Allstars for three months. 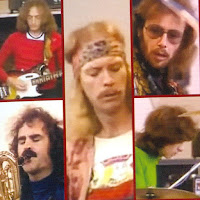 The band was built on world-class standards of playing and complex arrangements, and inspired by overseas groups such as Traffic, Santana and Weather Report. The original members were all seasoned players, widely regarded as among the best musos in the country, and their musical connections were woven through a series of major bands of the 60s and early 70s.

Ayers Rock were one of the first groups signed to Michael Gudinski's newly established Mushroom label, and their debut single, "Rock'n'Roll Fight", was issued at the end of 1973. Ayers Rock's debut album Big Red Rock was taped live before an invited audience at Armstrong's Studios in Melbourne over two nights in September 1974. The live-in-the-studio approach worked extremely well for Ayers Rock, and the album clearly demonstrated why their awesome live 'chops' had made them such a popular concert attraction. But it also was something of a necessity for the cash-strapped label -- they took the same approach with another early signing, Mackenzie Theory. The Ayers Rock debut LP reportedly cost Mushroom a  mere $5,000 to record.

In January 1975, the group performed at the fourth Sunbury Pop Festival, and Big Red Rock and "Lady Montego" were released in the US on 28 February. On 20 April, they performed at a benefit Concert for Bangladesh at the Sidney Myer Music Bowl with the La De Das, Jim Keays, AC/DC, Phil Manning, Daddy Cool, Toulouse & Too Tight, the Dingoes, and the Moir Sisters.

This post consists of MP'3 (320kps) ripped from DVD (thanks to Pete Power Pop at Midoztouch) and full album artwork (reworked from the DVD cover by WoodyNet with thanks). I've also taken the liberty of including the above video clip featuring Daddy Cool's rendition of Eagle Rock in MP4 format.
It was a little disappointing to discover while researching for this post, that there is precious little information regarding this epic concert on the web or in print (I couldn't even find how much money was raised for the Freedom From Hunger Campaign), and no other video/ audio releases exist for the remaining artists on the Bill, in particular ACDC.
Interesting to note that Jon English was chosen to MC the concert, rather than perform but I guess someone had to do the job and who better than ol' Dark Eyes.
Note: If you plan to burn this to CD, you'll need to spread it over 2 CD's
. 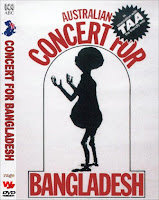 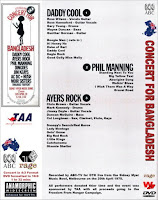