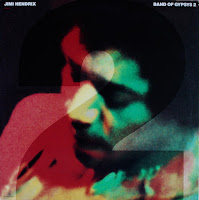 'Band of Gypsys 2' is a posthumous live album by American rock musician Jimi Hendrix, released in October 1986 by Capitol Records. This was the second time producer Alan Douglas supervised a Hendrix record for the label, the first being the live mini LP Johnny B. Goode, which was released earlier the same year.

The first side of the recording (Tracks 1-3) is an extension of the first Band Of Gypys album, from the Fillmore East, New Year's Concerts of 1969-1970.

The second side (Tracks 4-6) covers two Gypys Concerts, Berkley Community Center, May 1970 and the Atlanta Pop Festival, July 1970. Take note of Jimi's solos on these recordings, no studio tricks, just Jimi live. He never ceases to amaze me.

Liner Notes
The first side off this recording is an extension of the first Band of Gypsys album, from the Fill-more East, New Year's Concerts off 1969-70. The second side covers two Gypsys concerts, Berkeley Community Center, May 1970 and the Atlanta Pop Festival, July 1970. Listen to Jimi's solos on this recording, no studio tricks, just Jimi live. He never ceases to amaze you.
[ by the THE PRODUCERS]

Jimi explained his concept of The Band of Gypsys, as follows:
"Buddy is more of a rock drummer, Mitch is more of a classic drummer—more off a funky, R&B type drummer.

It was always my plan to change the bass player. Billy has a more solid style, which suits me. I'm not saying that anyone is better than the other—just that today I want a more solid style.
Musically we try to keep it together. That's why we have to change. That's why personnel in groups change all the time.

'Cause they're constantly searching'for that certain little thing. Calling it Band of Gypsys means it could even expand on personnel or so forth and so on. It's just going to be laying down what we see today. How we see things today. It's nothing but electronic blues. Electric blues and rock. It's all bottom. It's all rhythm. We're working on our voices. Buddy is getting all the voices together where that will be another instrument.

I haven't changed very much. My music is still pulsating, perhaps more varied. I either play very loud or very soft."   [by JIMI HENDRIX] 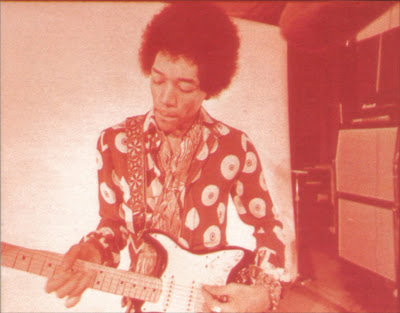 This post consists of FLACs ripped from my A+ Vinyl and includes full album artwork along with labels .
This album is rarer than the first Band Of Gypsys album because it wasn't as popular as the original, and only had a limited pressing run. 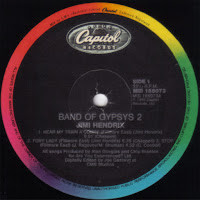