.
Before things get too serious at Rock On Vinyl, I thought it might be fun to post a song at the end of each month, that could be considered to be either Weird, Obscure, Crazy or just plain Korny.....
. 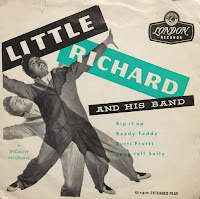 Richard Wayne Penniman (born December 5, 1932), known as 'Little Richard', was an American musician, singer and songwriter.
An influential figure in popular music and culture for seven decades, Richard's most celebrated work dates from the mid-1950s, when his dynamic music and charismatic showmanship laid the foundation for rock and roll. His music also played a key role in the formation of other popular music genres, including soul and funk. Little Richard influenced numerous singers and musicians across musical genres from rock to hip hop; his music helped shape rhythm and blues for generations to come, and his performances and headline-making thrust his career right into the mix of American popular music.

Little Richard has been honoured by many institutions. He was inducted into the Rock and Roll Hall of Fame as part of its first group of inductees in 1986. He was also inducted into the Songwriters Hall of Fame. He is the recipient of a Lifetime Achievement Award from the Recording Academy and a Lifetime Achievement Award from the Rhythm and Blues Foundation. Little Richard's "Tutti Frutti" (1955) was included in the National Recording Registry of the Library of Congress in 2010, which stated that his "unique vocalising over the irresistible beat announced a new era in music." 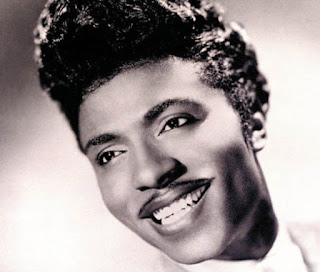 "Tutti Frutti" became an instant hit, reaching No. 2 on Billboard magazine's Rhythm and Blues Best-Sellers chart and crossing over to the pop charts in both the United States and overseas in the United Kingdom. It reached No. 21 on the Billboard Top 100 in America and No. 29 on the British singles chart, eventually selling a million copies.

Little Richard's next hit single, "Long Tall Sally" (1956), hit number one on the R&B chart and number 13 on the Top 100 while reaching the top ten in Britain. Like "Tutti Frutti", it sold over a million copies. Following his success, Little Richard built up his backup band, The Upsetters, with the addition of saxophonists Clifford "Gene" Burks and leader Grady Gaines, bassist Olsie "Baysee" Robinson and guitarist Nathaniel "Buster" Douglas.

Little Richard began performing on package tours across the United States. Art Rupe described the differences between Richard and a similar hit maker of the early rock and roll period by stating that, while "the similarities between Little Richard and Fats Domino for recording purposes were close", Richard would sometimes stand up at the piano while he was recording and that onstage, where Domino was "plodding, very slow", Richard was "very dynamic, completely uninhibited, unpredictable, wild. So the band took on the ambience of the vocalist."

Little Richard claims that a show at Baltimore's Royal Theatre in June 1956 led to women throwing their undergarments onstage at him, resulting in other female fans repeating the action, saying it was "the first time" that had happened to any artist. Richard's show would stop several times that night due to fans being restrained from jumping off the balcony and then rushing to the stage to touch him. Overall, Little Richard would produce seven singles in the United States alone in 1956, with five of them also charting in the UK, including "Slippin' and Slidin'", "Rip It Up", "Ready Teddy", "The Girl Can't Help It" and "Lucille".
. 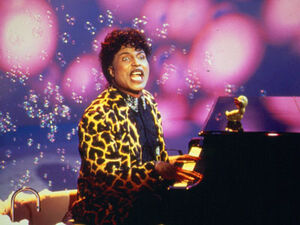 This month's W.O.C.K on Vinyl came about after I watched a video of  Richard performing "Tutti Frutti"on late T.V while I was in hospital.  I found this E.P in amongst a box of old 45's that was given to me by a mate (a collection of 45's that his late father had collected over his lifetime, dating back to the 50's and 60's and numbering @200). This EP is one of the many collector items I found within the box - thanks Ian.
IMHO Little Richard hits the W.O.C.K mark because his outrageous persona and stage antics defined him as a very Weird and flamboyant performer. In addition, the age and 'above average' condition of this E.P makes it an Obscure and very collectable piece of musical history. 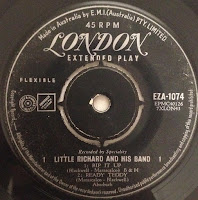