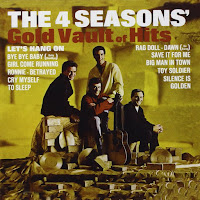 The 4 Seasons took a "hit sound", put their personal stamp on it and made it look easy — easy to make one hit record after another — easy to reach that coveted top slot reserved for The Big Name.
It is easy if you are Frankie Valli singing first tenor with Bob Gaudio on second tenor with Nick Massi lending a fine bass and Tommy de Vito adding his rich baritone. Cap that combination with song-writing talents, superb musicianship and the exceptional showmanship shared by these four handsome fellows and it IS easy to understand the 4 Seasons' year-round successes.
With barely a breather between hit records for Philips, the 4 Seasons have put their formula to work again and their latest, "Let's Hang On" has fired a shot of excitement straight at its target — the No. 1 chart position.
The 4 Seasons is one of today's few singing groups ignoring the trends and fads that keep coming and going. They have their solid sound — as distinctive a styling as ever sizzled into record sales, and they are staying with it.
"We consider ourselves very fortunate that there seems no need to alter our style," says Bob Gaudio, who has written most of the 4 Seasons' hits. 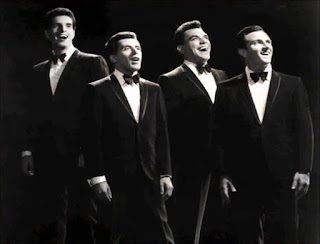 Unafraid of hard work, the boys never cut a song without first holding a full scale conference — wading through ideas for its arranging and its harmony. Once they have agreed, and often this comes after some heated discussions, the way is clear. It was just such researching, idea exchanging and conferring that resulted in hit discs like "Dawn", "Rag Doll", "Ronnie", in fact all the tracks on this L.P. show the exciting results of this painstaking "behind the scenes" work.
Although they once placed first emphasis on their unique sound, today, the 4 Seasons seriously consider lyrics as well. Titles of their songs must be simple, easy to remember.
At home on the music charts, the 4 Seasons know what their fans want, how they want it and their Philips records are proving that every day.
They are DIFFERENT in an era of sameness. They are ORIGINAL in a time of imitation. [Album Linear Notes]
.

Whether you consider them the East Coast answer to The Beach Boys, or rivals to The Beatles (as on a famous Vee-Jay LP compilation), Frankie Valli and the 4 Seasons have had a long, illustrious career.  Despite having scored his first hit with the Seasons back in 1962, Valli has hardly slowed his pace over the years, overseeing companies and productions of the 2005 musical Jersey Boys, readying a film version, and recently performing a concert on Broadway with a new line-up of Seasons.

The 4 Seasons are an American rock and pop band that became internationally successful in the 1960s and 1970s. The Vocal Group Hall of Fame has stated that the group was the most popular rock band before the Beatles. Since 1970, they have also been known at times as Frankie Valli and the Four Seasons. In 1960, the group known as the Four Lovers evolved into the Four Seasons, with Frankie Valli as the lead singer, Bob Gaudio (formerly of the Royal Teens) on keyboards and tenor vocals, Tommy DeVito on lead guitar and baritone vocals, and Nick Massi on electric bass and bass vocals.

The legal name of the organization is the Four Seasons Partnership, formed by Gaudio and Valli after a failed audition in 1960. While singers, producers, and musicians have come and gone, Gaudio and Valli remain the group's constant (with each owning fifty percent of the act and its assets, including virtually all of its recording catalog). Gaudio no longer plays live, leaving Valli the only member of the group from its inception who is touring as of 2015.

The 4 Seasons (group members 1960–1966) were inducted into the Rock and Roll Hall of Fame in 1990, and joined the Vocal Group Hall of Fame in 1999. They are one of the best-selling musical groups of all time, having sold an estimated 100 million records worldwide.

.
Album Review
Gold Vault of Hits was first released on the Philips label in 1965, with its follow-up 2nd Vault of Hits arriving the next year, in 1966.

Frankie Valli’s shimmering and utterly distinct falsetto soared above the 4 Seasons’ harmonies and rock-and-roll rhythms to create a vibrant and radio-friendly sound. Built on a foundation of doo-wop and traditional pop vocals honed on the mean streets of New Jersey, the 4 Seasons’ catalog contains some of the most enduring songs of all time.  You’ll find a great many of them on both of these wall-to-wall hits compilations.  Gold Vault overlooks the group’s earliest successes, most of which were saved for 2nd Vault compilation: “Sherry” (No. 1, 1962), “Walk Like a Man” (No. 1, 1963), “Big Girls Don’t Cry” (No. 1, 1962), “Candy Girl” (No. 3, 1963), “Marlena” (No. 36, 1963), and so on.

The group’s track record is even more impressive considering the fact that the British Invasion was in full swing as producers/songwriters Bob Gaudio and Bob Crewe created their string of pop masterpieces for The Seasons.  Sandy Linzer and Denny Randell were also major parts of the Seasons’ songwriting family.
.
The reason for posting this album on the last day of 2015, is because the album is exactly 50 years old and its release should therefore be celebrated. The 4 Seasons (with Frankie Valli at the helm) have produced some wonderful music for more than half a century and it is only fitting that this blog acknowledges their contribution to the Performing Arts. I came across this album only recently at a local estate sale and was overwhelmed by the collection of records that was held within. Although the collection was not really from my era (mostly 50's and 60's) I did find some gems such as this one, and I will be posting the remainder in the new year. I've ripped the album (which is in pristine condition) to MP3 (320kps) and included full album artwork. As an added bonus, I've included two other major hits by The 4 Seasons (which were not released on the Phillips label), but I'm sure you will know them - "Sherry and "Big Boy's Don't Cry". 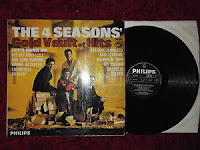