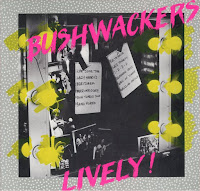 When a group of Melbourne university students gathered to share their love of traditional music in 1971, little did they realise that they were establishing a musical ‘institution’.

There had been ‘bush bands’ before, but none that captured the public’s imagination to such an extent that they were able to turn professional.

Having established residencies in Melbourne pubs, the band’s attention quickly turned to Europe where two of their great influences – Fairport Convention and Planxty were leading a folk revival. They wanted to be part of the action, and in 1974 took off to try their luck. While in the United Kingdom, the Bushwackers were befriended by such top-ranked folk acts as the Chieftains, the Dubliners, Fairport Convention and Steeleye Span.

In Australia, they continued to attract enthusiastic crowds to their performances at the Dan O'Connell Hotel in Fitzroy, where they appeared every Friday night from 1977 to 1980.  They released their first single, "When the Rain Tumbles Down in July," in 1973.

Their first 8-10 years were split between extensive tours at ‘home’, and 5 European tours from the band’s base in London. Their energy and musicianship made an instant impact – Melody Maker describing them as taking the UK folk scene “by storm”. Numerous and extensive tours of the UK, Ireland, France, Holland and Germany established them as confirmed club and festival favourites – Cambridge, Rotterdam, Edinburgh …., and their debut LP ‘The Shearers’ Dream’ reached No.1 on the Melody Maker Folk Chart. The combination of traditional instruments, electric guitar and bass and the unique percussive drive of the Lagerphone, meant they rocked like no other folk band!

During their home visits, the band began to explore and popularise the neglected area of bush dance.

The late 70s and early to mid 80s saw the band’s self-promoted Bush Dance Spectaculars attract 2-3,000 people to Town Halls and major venues throughout Australia. The impact of this dance phenomenon saw a single from their (Gold) ‘Dance Album’ reach the No. 14 on Melbourne’s leading commercial Pop/Rock station!

With the addition of drums in 1980, the Bushies entered musical territory previously unexplored in Australia. This was the decade of the ‘pub rock’ boom, and saw the band sharing stages (and holding their own) with the cream of Aussie rock – The Angels, Men At Work, Cold Chisel, Midnight Oil.

The band released two Australian Song Books and two dance books and albums which – to this day, hold sales records. No Aussie school could do without them.

In addition to ten albums, the group's music was heard on numerous movie and television soundtracks. In 1984, they announced they were disbanding due to "the costs of keeping the band on the road and the desire to spend more time with families." The group continued to get together for annual reunion tours from 1984 until 1990.

Late in 1993, Roger Corbett (bass, mandolin, harmonica and vocals), who joined the group in 1980, and Dobe Newton (largerphone, whistle, bodhran, bones, spoons and vocals), a member since 1973, re-formed the group. Although they initially called the reorganized band "the Range Rovers", they went back to their original name upon signing a publishing contract with Warner Chappell and a recording contract with ABC/EMI. 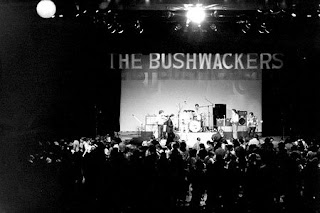 After decades of relentless touring, in 1995 the band decided to take a break from the road. The national broadcaster – ABC, marked the occasion with a 1-hour TV special “The Last Dance”. The band continued to record and perform at major festivals/events.

In 2007, the band realised a long-held dream, traveling to Nashville for the Australian Festival. The combination of Australian songs and subject matter and celtic-influenced music proved just as popular with Americans as it had with European fans 30 years earlier!

This LP was recorded live at the Revesby Workers Club in Sydney in 1984. At that time, the members of the band were Dobe Newton (only remaining original memeber), Roger Corbett, Tommy Emmanuel, Danny Bourke, Tony O'Neill, and Freddy Strauks. Although the LP features only 12 tracks, it contains about one hour of music as there are some extra instrumental segments in some tracks.

This post consists of both FLACs and MP3's (320kps) ripped from my vinyl copy which I found in amongst a 'complete set' of Bushwacker albums, at the local flee market. I picked this album up along with a few other titles for a song (pun intended) and it was obvious from their 'mint condition' that their previous owner had really looked after the collection. I'm normally not attracted to Bush/Folk music, but with the presence of Tommy Emmanuel (on guitar) and Freddy Strauks (on drums) I couldn't resists and am glad I did so - this is a great album.
.
Track Listing 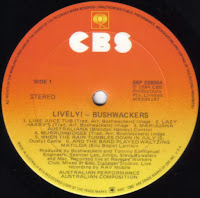