Dr Hook And The Medicine Show - Revisited (1976) plus Bonus Track 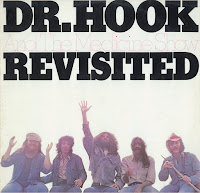 An American group, Dr. Hook And The Medicine Show assembled over a gradual period in late '60s around a nucleus of Locorriere and Southerners Sawyer, George Cummings and Francis. Sawyer, an eye-patched, ex-soul singer from Chicksaw, Alabama, and Locorriere, a New Jersey folkie, were vocalist-leaders of the group which played bars and dives around New Jersey area until their "discovery" by  cartoonist / songwriter Shel Silverstein.
Silverstein got them gig of appearing in, and performing soundtrack music for, a Dustin Hoffman movie he had scored, "Who Is Harry Kellerman And Why Is He Saying These Terrible Things About Me?"
This led to CBS recording contract for the band, at that time a five-piece. From their 1972 debut album came U.S. and U.K. hit single with the Silverstein written "Sylvia's Mother". The Hook added Garfat and Elswit to fill out their stage sound and recorded Sloppy Seconds (1972), from which Silverstein's "The Cover Of Rolling Stone" single was an American smash. 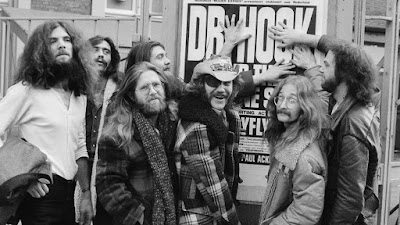 Dr. Hook and The Medicine Show were featured on the cover of the March 29 edition of Rolling Stone magazine in 1973, thus gaining a massive plug for their CBS single at the time, "The Cover Of The Rolling Stone", which entered the US Top 10 in its first week. The song was penned by Shel Silverstein, the Playboy writer and cartoonist, who also wrote most of Dr Hook's earlier material. 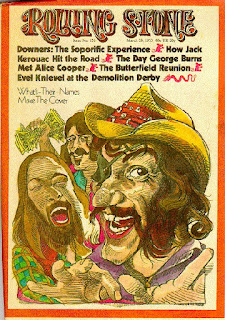 In fact, all the material on the first two albums was Silverstein composed (among his earlier credits was "A Boy Named Sue" for Johnny Cash), and the group returned the compliment by playing back-up on the songwriter's "Freakin' At The Freakers Ball" solo album (1973).
'Belly Up' (1973) introduced Dr Hook's own compositions, but their follow-up 'Fried Face' (not released in U.K.) caused friction between band and label resulting in a switch to Capitol.
Latter day hit singles include their version of Sam Cooke's "Only Sixteen" (in U.S.) and "If Not You", and the title cut from "A Little Bit More" (1976). On stage they remained as one of rock's more eccentric attractions.
Founder-member George Cummings (guitar, steel guitar) quit the band in autumn of 1975 suffering nervous problems; and Bob Henke eventually joined in 1976. Ray Sawyer's solo album, released in 1977 had minimum success. [extract from The Illustrated New Musical Express Encyclopedia of Rock by Nick Logan & Bob Woffinden, Salamander Books, 1977. p70]
. 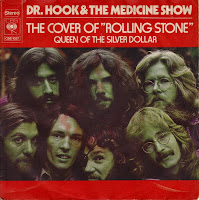 Another Dose of Dr. Hook
The last time Dr Hook toured Australia, they fell foul of that old criticism that despite all their oil-stage looniness and zaniness, it was all a well-rehearsed act that was repeated with military precision the next show, and the one after.
American rock critic Lester Bangs summed it up beautifully when he wrote some years back: "They're the most pristine (outgoing) professional imitation of total non-professionalism I've ever seen."
Dr Hook didn't agree. They say there's always enough spontaneity to make each show different.
"One Night," cackles the one-eyed Ray Sawyer, "I knocked my microphone over and it scared me, so I jumped back and, knocked Rick's over, and that scared me so I jumped over and knocked Jay's over, and it scared him and he knocked his over!"
It ended up with the entire band grovelling onstage hunting for the microphones along with roadies, everyone going "quack, quack' like ducks. 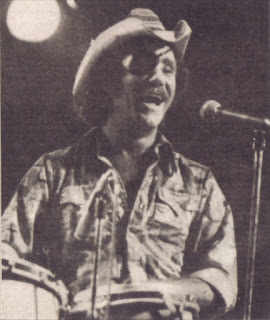 "The audience just lapped it up," continues Sawyer, "and that's the way it should be. If something blows or breaks, we don't stop the show and scream for a roadie to come out and fix it. We let it stay broken awhile."
"You can get killed once a night," adds his partner in crime Dennis Locorriere, telling gleefully of the time when Sawyer fell off the stage and broke his leg, and the whole audience got up and cheered because they thought it was part of the act!
Or the time when they almost got banned from completing a European tour because one of their at an open-air festival in Copenhagen, had ended up with the band and audience running around in the nude.
"We were the last act on the show," recalls Ray, "and by that time everybody had been drinking quite a bit. In Scandinavia they don't think that much about takin' their clothes off - the human body is not that restricted. So there were quite a few people there with their clothes off.
"And Dennis made the mistake of saying something like 'Gee, it's really hot' and 'Hey, there's more to look at in the audience than onstage'. And more people started taking their clothes off and yelling at us to take ours off and become one of them. We Would have felt kinda funny if we didn't, so we went ahead and did it. But we wouldn't do it again though." 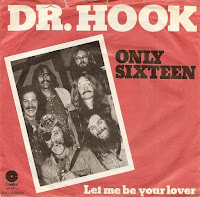 And then there was that time when King Weirdo himself, Alice Cooper, came up and said 'I saw you guys on the David Frost Show and you've got to be the weirdest band I've ever seen on television!" Dr Hook were freaked out that it could come from someone like him, but they took it as a  compliment anyway.
Originally known as Dr Hook's Medicine Show, they had a huge hit with "Sylvia's Mother" in 1972, followed it up with "Cover of the Rolling Stone" in 1973, and then faded into bankruptcy in 1974.
When they found themselves broke, they didn't disband. They stayed-together, hustled for bread for rented time in a recording studio, started rebuilding again in "Only Sixteen" and "Little Bit More" and found that they became huge in Australia, America, England and many parts of Europe.
"It was confusing, says Dennis."As it is, people are confused about Dr Hook anyway. People wonder,'which one is Dr Hook?' or 'is he wearing that patch 'cos he's got a bad wearing that patch 'cos he's got bad eye or is it a gimmich?' and 'are those slow songs for real or are they a send-up?'
"We're hard to define but it's basically good time music, where people have fun if they can see that you obviously are." 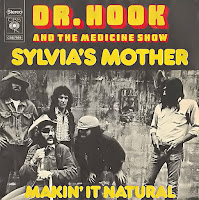 It's been a long time since "Sylvia's Mother" but the song still hangs around them like an albatross. It was back in the days when Dr Hook were more a vehicle for composer Shel Silverstein who wrote most of their stuff. But they know what the audience wants and play along with it. They send it up.
Sometimes on a fine night, Dennis will add extra words to it -

And the whole audience roars with delight.
Every time they keep using a four letter word, Dr Hook gets the laughs. That's the role they've created for themselves (Article from JUKE Magazine - May 6, 1978 p7)
.
This post consists of MP3's (320kps) ripped from my trusty vinyl that I purchased back in 77' when I was just starting Uni - Oh such wonderful memories.  Full album artwork and label scans are included as usual.
I've taken the liberty of including their 1976 hit "Only Sixteen" as a bonus track, as it didn't quite make it onto this Best Of Compilation. Also note that this album has also been released under the title of  'The Best Of ' (see cover below). 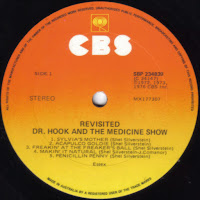 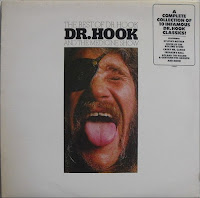 Posted by AussieRock at 7:26 AM