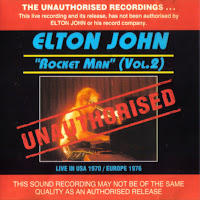 A true super-showman, (Sir) Elton John has been called "the Liberace of Rock and Roll." Known almost as much for his outrageous stage costumes and sets as he is for his bluesy style on the piano, Elton John was the king of pop music in the mid-1970s, with such #1 hits as "Philadelphia Freedom", "Crocodile Rock", and "Don't Co Breaking My Heart". Though his songs no longer monopolize the radio airwaves as they did before his breakup with songwriter Bernie Taupin, Elton John continues to release albums, singles, and videos and to tour, often playing to sellout crowds. His stage performances remain hugely entertaining, and his talent as a pianist and his gift for melody have ensured him a place in the hearts of fans who enjoy his unique sound.

Reginald Dwight was born in England in 1947 and began playing the piano at the age of four. He became the keyboardist for the R & B band Bluesology, headed by Long John Baldry, and subsequently changed his name to Elton John, taking "Elton" from the band's saxophonist, Elton Dean, and "John" from Baldry. By 1968 Bluesology had been disbanded, and in 1969 Elton released his first hit single, Lady Samantha, from his debut album Empty Sky (he had started writing songs with lyricist Bernie Taupin at this time). 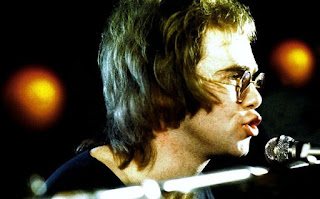 By the summer of 1970 the Elton John Band was formed and, with the release of the album Madman Across the Water, Elton John's career as one of the highest-paid performers in the music world was launched. A truly impressive string of hit singles followed for several years, including Rocket Man, Honky Cat, Crocodile Rock, Daniel, Saturday Night's Alright for Fighting, Goodbye Yellow Brick Road, Bennie and the Jets, Candle in the Wind, and, surprisingly, Lennon and McCartney's Lucy in the Sky With Diamonds. Until 1989, Don't Go Breaking My Heart -Elton's duet with Kiki Dee - was probably his best-known single, but the Number 1 hit Sacrifice changed all that. In recent years Elton has teamed up with a variety of other artists, most notably with George Michael in 1991 on Don't Let the Sun Go Down on Me, releasing an entire album (aptly titled Duets) with an all-star line-up of guest singers in 1993. 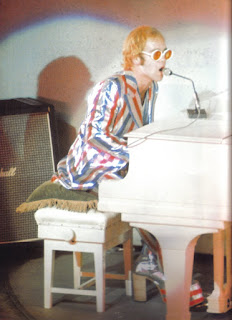 Elton John 1970
The line-up made its recording debut on Elton John, released in April 1970. On the evidence of the album, Uni Records claimed the group for America; as the label that had signed Neil Diamond, it clearly recognized a singer-songwriter of promise.
In the wake of this signing, the trio were sent out to the United States for a series of showcase gigs which started with a week at Los Angeles' prestigious Troubadour Club which was celebrating its twentieth anniversary in a blaze of media attention. From the outset, when Leon Russell turned up to take his seat in the front row, it was obvious that there was a buzz about town for this unknown Englishman in his yellow overalls, Donald Duck bib and aluminum boots. Graham Nash, the Beach Boys, Quincy Jones, Gordon Light-foot and others joined the throng as the residency progressed, and the press coverage was nothing short of sensational. Los Angeles Times critic Robert Hilburn's reaction was typical. 'Rejoice,' he said, 'Rock, which has been going through a rather uneventful period lately, has a new star!'
After returning briefly to Britain at the end of his three-week tour, Elton soon found the demand for more American appearances overwhelming. By November 1970 Elton John had sold 250,000 copies in its ascent to the dizzy heights of No. 4, while the soon-to-be-released Tumbleweed Connection would do nearly as well.

The coming year, 1971, would bring a surfeit of record releases: apart from his third and fourth albums, Tumbleweed Connection and Madman Across The Water, Elton had scored the film Friends with Paul 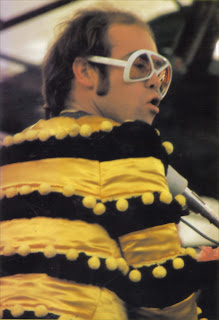 Buckmaster, while a live radio-show broadcast in the United States by New York's WPLJ-FM radio was released as 17.11.70 (or 11.17.70, depending on which side of the Atlantic it was sold) and reached No. 20 in Britain and 11 in the States without the aid of a hit single.
From being a total unknown, Elton John had released five albums in four years and had become an international star.
Britain had finally caught on to the Elton John phenomenon, and 'Your Song' was lifted into chart contention in early 1971; Elton John itself reached No. 11. Indeed, the rewards had already proved enough for Elton to buy a bungalow on an exclusive private estate in Wentworth which boasted Rod Stewart (an old friend) and Donovan as neighbours. Tumbleweed Connection added to those rewards, becoming his first British Top 10 album. Its No. 6 position was beaten by one place in the Billboard listings, Britain and America in total accord as to the album's excellence. The bulk of this phenomenal success was down to the quality of the songwriting. [extract from Elton John, by Nick St Michael.Bison Books, 1994, p16] 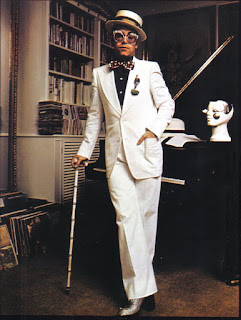 Elton John 1976
1976 was the year in which Elton gave the first overt clues as to his complex sexuality, in a Rolling Stone interview. "There's nothing wrong with going to bed with someone of your own sex," he bravely admitted. Surprisingly, there was little backlash from his fans in Britain, although things-would be different a decade on, when a national newspaper took it upon itself to smear his name. In the United States, however, Elton believed 'it had a chilling effect on people. They didn't really want to know, and were offended.'
Elton now owed Dick James just one more album, which would be a live selection; the resulting Here And There, recorded in London and New York, was a transatlantic Top 10 entry. Although DJM retained the rights to a future Greatest Hits album, all Elton's future releases would now be on Rocket Records, 'home' of band members past and present Nigel Olsson and Davey Johnstone. Dee Murray meanwhile was touring the States (where he now lived), first with Procol Harum and then with Alice Cooper.
Real success, however, was left to the boss to achieve, and this he did with the assistance of 'Don't Go Breaking My Heart,' a duet performed with Kiki Dee. The song (written by Elton and Bernie under the pseudonyms of Ann Orson and Carte Blanche) would be memorably reprised twice on future occasions: firstly on The Muppet Show, with Miss Piggy taking Dee's place, and again in 1985 on the global stage that took Live Aid to an audience of 1.5 billion people. It was no surprise that the song topped the charts in the United States, but it was pleasing that it became Elton's first British No. 1. Indeed, it became the sound of that particular summer, staying in the top spot for six weeks. His old record company, DJM, would attempt to cash in by reissuing 'Bennie And The Jets,' never before released as a UK A-side. Back in America, Elton reinforced his record-breaking run of live shows by smashing a year-old Rolling Stones house record with seven sellout dates. 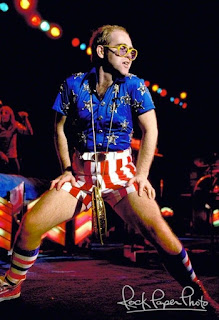 Talking of houses, Elton had quit 'Hercules/ his Wokingham home, in early 1976 for 'Woodside,' a mansion in Old Windsor, England, where he would reside into the 1990s. 'I always buy Country Life and have a look at houses for sale,' he would later admit. 'But I've got a nice house, a lot of garden and my little recording studio. It's close to London, it's close to the airport and it's close to Watford.' Despite buying a Los Angeles base in the mid-1970s, Elton had always shunned the idea of becoming a tax exile. 'I belong here,' he said simply.
As so often in previous years, in 1976 Elton planned a record release for the Christmas market. Blue Moves was his first such release for Rocket Records, but the last to be produced by Gus Dudgeon and with Bernie Taupin's words (entirely, at least). Famous friends chipping in on the backing-vocal front included David Crosby, Graham Nash, Beach Boy Bruce Johnston, and Toni Tennille of the Captain and Tennille.

A double album, Blue Moves came clad in a controversial sleeve on which nude men frolicked; indeed, certain critics initially tried to interpret the title as 'Blue Movies.' With regard to the content, parallels with Goodbye Yellow Brick Road were obvious. As frequently happens, the first single was the most successful, and .'Sorry Seems To Be The Hardest Word' was indeed a classic. The likes of 'Bite Your Lip (Get Up And Dance)' were hardly in the same class, while 'Cage The Songbird,' a paean to Edith Piaf, begged the inevitable comparison with 'Candle In The Wind.' The general tone of the album was less than optimistic, doubtless due to Bernie Taupin's split with his first wife Maxine. Two of the more cheerful songs were in fact instrumentals, including Elton's Theme From A Non-Existent TV Series.'
The reason behind the split with Gus Dudgeon was, reveals the producer, that 'the challenge had gone,' and he gave an insight into Elton's preferred way of working. 'He'd got to the point where he was going into the studio only five days before the album and writing the whole album in those five days - and writing three or four hits. He did it every time - what more could you ask for?' [extract from Elton John, by Nick St Michael.Bison Books, 1994, p28-29] 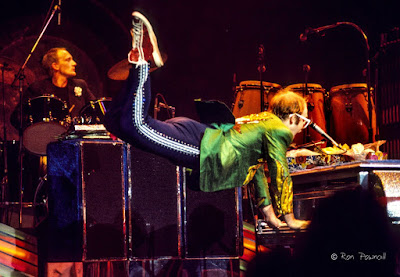 This post is a bootleg recording taken from a live recording from the WABC Studios, New York on Nov 17, 1970, with the last three tracks coming from Radio Broadcasts of his 1976 European Tour.  It consists of MP3's (320kps) ripped from my Australian 'Unauthorised' Banana CD release and is the 2nd volume in a series of four. Other tracks from the WABC Studios recordings were officially released under the title 'Elton John 11-17-70' (see below)
The quality of the recording is clear and dynamic and would rate it as an  8/10.  Full album artwork, along with a concise listing of all Unauthorised releases is provided.  This bootleg captures Elton in his early days when he was still building up his song repertoire and although subtitled 'Rocket Man' this hit was still two years away from being released.
.
Track Listing 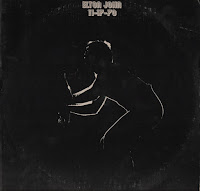