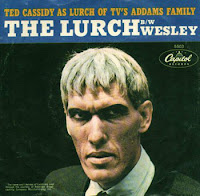 There's probably not many people on this planet (or at least in the Western hemisphere) who haven't seen an episode of the Addams Family and haven't fallen in love with the bizarre characters portrayed in this 60's T.V sitcom, in particular the Addam's 'gargantuan butler' Lurch. Now, Lurch loved his job. No, really. Just look at that happy twinkle in his eye the next time you watch an episode of the show.

The Addams family simply couldn’t function without him. Amidst all the explosions, sword-fighting, and man-eating plants, Lurch is the steady, lumbering rock that keeps the household in-line. 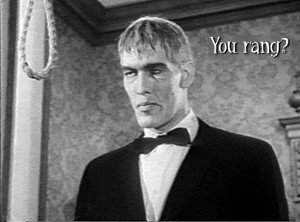 Lurch keeps a predictable routine and will always show up when the bell is rung. He’s careful and deliberate in the execution of his duties, and tends to the family’s practical, physical needs—like making dinner and…cleaning, I guess? I’ve seen him with a feather-duster, but perhaps he’s applying the dust rather than removing it.

Although Gomez and Morticia consider him bright and animated, Lurch won’t even smile unless prodded, and even then it’s a ghastly-looking affair. He rarely speaks more than a sentence or two (the character was supposed to be mute until Ted Cassidy ad-libbed “You rang?” in the pilot and cracked up the producers), and normally expresses his reservations about the family’s hi jinks with groans and moans.

I must say, I’ve found an annoyed Lurch moan to be one of the most satisfying ways to express my exasperation with some people. Especially at work ! 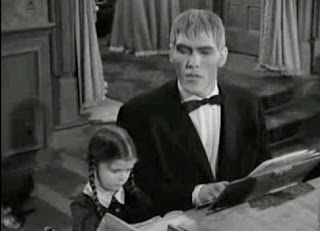 Lurch has fixed his loyalty on the Addams's, and won’t be moved. They consider him family, though he’s usually reluctant to cash in on their affection for him. He has a very sweet, nurturing relationship with little Wednesday — he teaches her the harpsichord, and she teaches him to dance—and when she asks him why he doesn’t express his happiness, he admits to her, “I like being miserable.”

Lurch becomes famous for a spell when his harpsichord playing and unique voice turn him into a teen music idol overnight. He enjoys the attention at first, but then suddenly his new agent wants to take him on a world tour. The Addams family convinces Lurch to go through with it, but a few steps out the door, he’s mobbed by fans. Lurch stumbles back inside and happily returns to his old life.

The only thing Lurch has to show for his short moment of stardom is a one and only single release, included here for your entertainment. 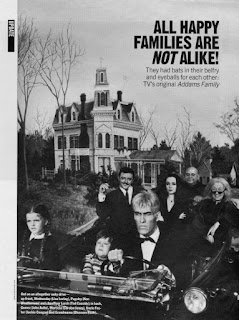 Gary Paxton (the songwriter/singer, later turned contemporary Christian recording artist in the 1970's, who was responsible for novelty hits as "Alley-Oop" and "The Monster Mash") was responsible for this Ted Cassidy record. He co-wrote both "The Lurch" and "Wesley", and it's too bad there was no follow-up record. Capitol Records just considered it a one-time and done deal, as many novelty records at the time were common for.

Capitol Records may have considered a follow-up recording of Ted Cassidy playing organ or harpsichord (just like they did with Detroit Tigers' pitcher Denny McLain in 1968 for two Capitol singles, and a whole album, which is a major find here in Michigan, a collector's item elsewhere.) but no such luck on Cassidy's part. Unfortunately, he was typecasted with the "Lurch" image, and it was hard for him to shake it off for the rest of his career, despite getting dozens of roles in movies and TV shows (he hated being typecasted as "Lurch", too. And he was dismayed about being confused by the late Richard Keil, who played on a couple of the James Bond movies.) 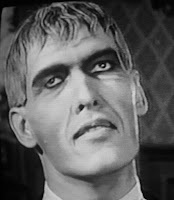 Some fun facts: Ted Cassidy stood 6' 9" (2.06m). Played multiple sports. Entered high school at the age of 11. An accomplished organist, he faked playing the harpsichord on "The Addams Family." Among other voice work, he narrated the opening of "The Incredible Hulk" TV series.

"On the October 30, 1965 Halloween episode of Shindig, Lurch debuted a new dance craze called "The Lurch." The dance steps were nothing more than a lot of shuffling and arm dangling a la the Frankenstein Monster."

So, this month's WOCK on Vinyl features a couple of Crazy tracks sung by the Lurch himself and like the shows theme song, it's just a bit Kooky and spooky for my liking.  The rip was sourced from Mr Weird and Wacky with thanks and features MP3's (320kps) with artwork and label scans.  The A-Side is called " The Lurch" while the B-Side is a filler entitled"Wesley". 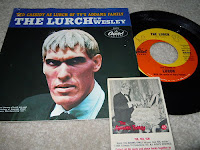 HERE IS A REALLY RARE 45 AND PICTURE SLEEVE BY TED CASSIDY OF THE ADDAMS FAMILY ON CAPITOL #5503, BOTH SLEEVE AND 45 IS VG+ BUT THERE IS LITTLE WRITING ON THE 45 LABEL. ALSO INCLUDED IS A RARE ORIGINAL ADDAMS FAMILY CARD #45 OF LURCH.

Posted by AussieRock at 7:54 PM