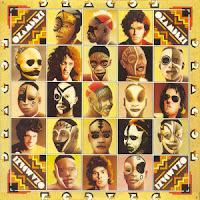 Dragon's story is an interesting one. They started out as a prog-rock group in the early seventies but were met with general indifference. It took some personnel changes and a move from Auckland to Sydney for their careers to take off.

The most notable of the personnel changes was the addition of vocalist Marc Hunter who replaced the departed Graeme Collins at the request of his brother and Dragon guitarist, Todd Hunter.

Marc Hunter looked the part and had the voice and the change of venue was just what the band needed. The move to Sydney put Dragon on a stratospheric trajectory in their adopted homeland.

Following their success in Australia they decided to try to crack the US market on a disastrous tour supporting Johnny Winter. After inciting a crowd in Texas by derogatorily insinuating they preferred the romantic company of the same gender. Marc Hunter related the story in a 1994 interview: 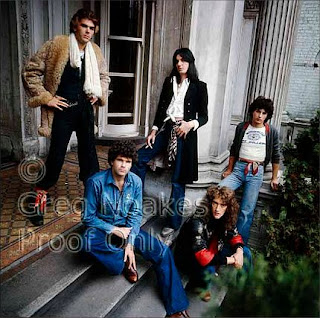 I remember seeing someone standing holding a pistol and shouting 'I'm gonna kill you, you son of a bitch'... I didn't know it but by this point the rest of the band had left the stage. I was still singing because I could still hear the music in my head. It took ages to clear the pile of debris on the stage - broken glass, bottles, chairs, half a table - but I was totally unaware of this, I thought I was going over really well and I'm standing there in a crucifixion pose with my arms out, really gone, with heaps of eye make-up on, looking like some sort of twisted priest. And apparently Johnny Winter was taking bets on the side of the stage as to how long it would take before somebody shot me. Then I turned around and saw no one was on stage so I realised I wasn't going over too well after all and I went back to the dressing room and everyone was just standing there... I said 'We went great, weren't we terrific?' At that stage of the band I was really a shocking sod. And all the record company people were just staring at me like I was an 'insectoid' from Mars. And so that was it for us for that trip to America."

O Zambezi was released just before Dragon's ill-fated tour of the United States in 1978. From start to finish this album is a catchy capsule of late seventies rock. The album only peaked at 17 in Dragon's native New Zealand but in Australia it was a much different story as the album shot all the way up to #3 largely on the strength of the #1 hit single "Are You Old Enough?" and the catchy "Still In Love With You". To this day, O Zambezi remains Dragon's highest charting album and largely on the strength of their catalog from this era of the band, Dragon was inducted into the ARIA Hall of Fame in 2008.

If you're new to Dragon O Zambezi is an excellent album to start with as it's a snapshot in time of the band at the pinnacle of their success when they were firing on all cylinders making infectious uptempo pop music.

On a sad footnote keyboardist Paul Hewson died of a drug overdose on January 9, 1985 and the excesses of the rock and roll lifestyle also caught up with vocalist Marc Hunter. He was forced to retire from performing when he was diagnosed with throat cancer in 1997. Unfortunately, he inevitably succumbed to cancer on July 17, 1998. [extract from perplexio76]
. 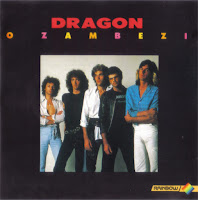 This post consists of FLACs ripped from my Rainbow CD release and includes full album artwork for CD and LP along with label scans.  Although their debut album 'Sunshine' is a classic, this album comes a close second in my opinion and is packed full of great tunes.
I have also chosen to include as a bonus track, their non-album single "Konkaroo" which was released between their 1977 Running Free album and the 1978 O Zambezi release. The track is also available on their Greatest Hits Vol.1 album released by Portrait in 1979. It is strange that this high quality release found its way on a low budget label such as Rainbow. Because I found the CD at the market I am unsure what its original selling price was but suspect it was a low cost release, indicating that CBS had probably lost faith in the band. They deserved better in my opinion.The cover for this Rainbow is shown right
.
Track Listing 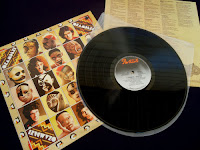