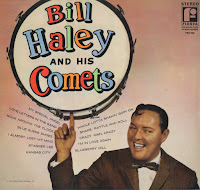 It was the 1950s and prosperity had arrived. There was time for spending money, fads, and heroes. It was time for a new generation, the living was easy. Time for the start of something big.
If you were a kid there was time for movies, and of course records. A new sound had arrived - Rock 'n' Roll propagated across the country. By 1955 it had taken over, and Bill Haley and his Comets were in first place with "Rock Around The Clock" - 1955 was Bill Haley's year. His records were not only played, but were bought by the new generation in their thousands — much to the chagrin of their parents.
In 1954, Bill got his Comets together, and they recorded hits like 'ABC Boogie', 'Razzle Dazzle', Thirteen Women', 'Dim, Dim The Lights', 'Shake Rattle and Roll', and in 1955 his phenomenal 'Rock Around The Clock'. Bill Haley and his Comets rocketed to world stardom. 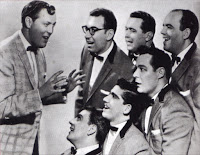 More hits followed, 'Burn the Candle', and of course 'See You Later Alligator' - a phrase that became part of the jive talk anywhere kids were together.
Bill Haley had a wide appeal - rock 'n' roll spread from middle-class suburbia through to New York's Harlem (Haley was one of only 5 white artists to make the R & B charts between 1950 and 1955).
By 1966, much to parental dismay, rock 'n' roll was a household word, and a very important part of life for teenagers. Competition was growing, but Bill still churned out hits such as 'Rip It Up', 'Skinny Minnie', and 'R.O.C.K.' 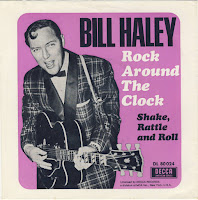 Other rock 'n' roll singers were emerging, and bringing with them a new breed of rocking, raving, shrieking, bumping, grinding performers. A new kind of beat the kids could dig because it was their own.
Bill Haley was at the top for a long time. He had his own style, and it had a lively foot-stompin' beat which was the forerunner for much of today's music. Many of our current musicians owe a debt to people like Bill Haley who helped change the course of popular music all over the world.
Bill Haley's sound has never died, and the combination of R & B and back country music will be remembered for a long time yet, along with the famous 'spit curl hair' and plaid jackets which were the image of Bill Haley's style.
. 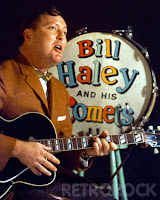 This post consists of MP3's (320kps) ripped from my Australian vinyl pressing, released on the Fiesta Label (a subsidiary label for Warner Bros), which after 57 years, stills plays as well as the day is was released back in 1960, when I was still in nappies.  Full album artwork and label scans are also included.
There is an enormous variety of music in this album, and it is a tribute to Bill Haley that he could perform all of it so splendidly. Not many artists of that era could draw material from so many sources and be so completely at home with all of it.  On a final note, the album states that it is Stereo, but I suspect some electronic enhancement has been used to convert Mono into Stereo.  For you added enjoyment, I have included some bonus tracks that are well known standards of Haley -  "See Ya Later Alligator ", "Razzle Dazzle" and "Burn That Candle".  Hope you enjoy this trip down memory lane.
.
Track Listing 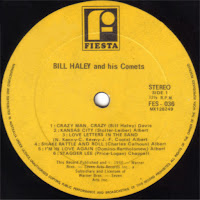 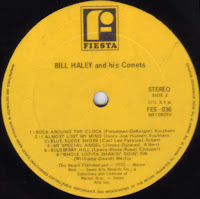