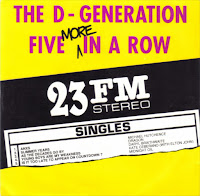 The D-Generation was a popular and influential Australian TV sketch comedy show, produced and broadcast by the Australian Broadcasting Corporation (ABC) for two series, between 1986 and 1987. A further four specials were broadcast on the Seven Network between 1988 and 1989.

One of the most talented and creative comedy ensembles to emerge out of Australia in the 1980s and 1990s were the D-Generation. They were a group of Melbourne University graduates, who after honing their craft in stage productions were offered their own sketch comedy series on the ABC in 1986. Their cutting edge and oft irreverent humour (not unlike Monty Python) was rewarded with a second ABC series, followed by a number of TV specials on the Seven Television Network during 1988 and 1989. At the core of the group initially were Rob Sitch, Santo Cilauro, Marg Downey, Magda Szubanski, Michael Veitch and John Harrison, and the late 80s saw the addition of Tom Gleisner, Jane Kennedy, Tony Martin, Mick Molloy and Jason Stephens to the lineup. 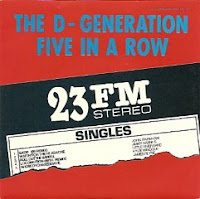 It was in late 1989 that the D-Generation released the comedy album ‘The Satanic Sketches’, and from that the single ‘Five In A Row’. The single was a comic take on FM commercial radio and featured Rob Sitch playing the part of a hip DJ playing a medley of popular hits, well mock versions, with a comic twist on the lyrics and delivery. Those artists songs to undergo the D-Gen ‘treatment’ were John Farnham, Jimmy Barnes, Little River Band, Kylie Minogue and James Reyne. The song appealed to listeners funny bones as much as their ears, reaching #12 on the singles chart.

About twelve months later a follow up ‘Five More In A Row’ was released. This time the D-Gen crew took aim at INXS (too try-hard), Dragon (too fat), Daryl Braithwaite (too old), Kate Ceberano (too curvaceous) and Midnight Oil (my personal favorite), and in the process scored their second top 40 hit (#37). Both songs were served well by hilarious promo clips - well, we were dealing with the brilliantly irreverent D-Generation after all. John Farnham even made a cameo appearance as himself in the clip to 'Five In A Row', while Shirley Strachan and Daryl Braithwaite joined in the fun on the clip for 'Five More In A Row'. [extract from retrouniverse.blogspot]

This post consists of MP3's (320kps) ripped from my 45 and includes cover art and label scans. The B-Side is a comical sketch that is reminiscent of the court room scene from Jim Carrey's 'Liar Liar' and exhibits a hint of Monty Python humour.  So it's C for Comedy and a little bit Crazy for this month's W.O.C.K on Vinyl.  As a bonus, I am also including the Video Clip that was used to promote the single (sourced from YouTube)

Posted by AussieRock at 7:59 PM