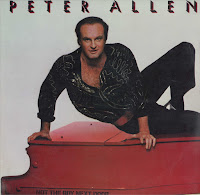 Allen was born in Tenterfield, New South Wales, a small Australian country town where his grandfather, George Woolnough, worked as a saddler. He grew up in nearby Armidale, where he lived from about 6 weeks of age until the age of 15. This is also where he first learned piano and dance.  He began his performing career with Chris Bell as one of the Allen Brothers, who were a popular cabaret and television act in the early 1960s in Australia. He began performing as "Peter Allen" around the same time.

Allen, the bon-vivant of the 'Bandstand' era was exiled from Australia to the flesh pots of Asia where the Allen Brothers teamed up with Judy Garland and the Queen of Camp adopted young Peter as her protege. She married him into the family, to her daughter Liza (with a Z). The Minnelli-Allens moved to New York where Peter worked in cabaret.

Everything went swimmingly until Liza came home early one day to find Peter in bed with another man. She claimed to be shocked by this. Allen's most important relationships were with other songwriters such as Carol Bayer-Sager. His songs were coveted by stage and screen stars (notably the Academy Award winner "Arthur's Theme") and Allen pretty much forgot about Australia until the mid-70's when 'Countdown' made him a star here with the song "I Go To Rio" and he began to call Australia home. [extract from Go-Set magazine]

In the summer of 1983, Peter was resting up in Leucadia admitting to having had a 'scalp reduction'. This was a skin-tightening process, administered to eliminate Peter's bald spot at the back of his head. (Peter said he had 'vetoed' hair plugs.) However, the hairline in front would soon tell its own story, suddenly lower and fuller, similar to a squashed mud cake at first, as these things always seem to be, but loosening up with time. Peter was also telling the press that he had a black eye as a result of a tennis mishap, which was perhaps so, ! but the skin around his eyes would soon appear tighter.

'There is such a thing as privacy,' Peter said after turning down | a home photo spread for People magazine. Cosmetic surgery was one thing, but Peter had not lost his horse sense. Bruce Vilanch, for instance, would speak of the briefing Clive Davis gave Peter Alien. [The label chief told Peter, now pushing forty, to go out and research [the field to find out what teenagers really wanted. A reasonable amount of time elapsed for Peter to accomplish this, then he reported back to [Clive Davis with his findings. Peter said he now knew what teenagers [really wanted. 'Usually around a hundred dollars,' he announced. 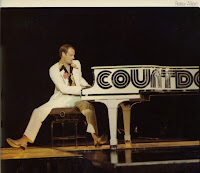 Peter and Dean Pitchford wrote the title song for his first Arista [album, Not the Boy Next Door. It was inspired by a 1944 Ralph Blane land Hugh Martin song, 'The Boy Next Door', the boy Judy Garland [had sung about and pined for in the Vincente Minnelli movie Meet Me in St Louis. The cover of Peter's 1983 Arista album depicted him supine atop a red piano, coiled as if ready to spring. The disco look had not worn well, indeed now appeared saturnine.  [extract from Peter Allen The Boy From Oz by Stephen Maclean, Ranmsom House Aust, 1996. p241] 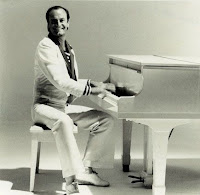 This post consists of FLACs and MP3's (320kps) ripped from my vinyl copy and also includes full album artwork. Due to poor credit annotation on the cover, I am unable to list the supporting musicians on this album.  Although this album was requested by one of my blog followers, it was an album that I have been meaning to post for sometime now.  I hope you enjoy it. 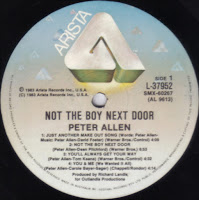 Posted by AussieRock at 7:31 AM