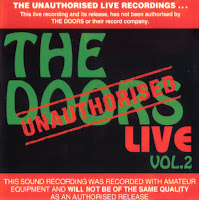 This is an Australian bootleg recording of the Doors at the Felt Forum, New York, NY on 18th January 1970 (Second Show)
The Doors played a two-night stand at the Felt Forum that was to be a tour in support of the forthcoming release “Morrison Hotel”. It was also the start of the final year of The Doors as a live touring band with Jim Morrison.

The previous year had been a bad one for The Doors. In the aftermath of the March 1969 concert in Miami, Jim Morrison was charged with indecent exposure and the rest of their tour was cancelled. The Doors took advantage of this enforced hiatus from touring by going back into the studio and returning to the basics of rock and the blues. “Morrison Hotel” was recorded quickly, starting in November of 1969, with the album released in February 1970. 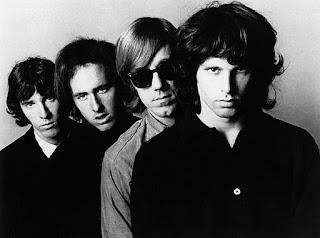 The Felt Forum was a small intimate venue inside Madison Square Garden for The Doors to start their touring schedule for 1970. Doors’ keyboardist Ray Manzarek likened it to the Whisky a Go-Go. Although the gig was only two nights, The Doors played two shows each evening. The shows were recorded for “Absolutely Live” and it was felt that the more intimate setting and acoustics of the venue would be enhance the recording of live material. The Felt Forum shows wouldn’t be released in their entirety until “The Doors: Live in New York” in November 2009.

Their latest album “Morrison Hotel” had not yet been released, but The Doors played a lot of songs from the album and fans enthusiastically greeted the album’s songs including “Roadhouse Blues”, “Ship of Fools”, and “Peace Frog”. The band also threw in Doors standards and songs like “Crawling King Snake”, “Little Red Rooster”, and “Love Hides”. The Felt Forum shows took their toll on Morrison’s voice and by the fourth show he sounded hoarse. Nonetheless, it didn’t stop Morrison and the rest of the band from putting on great shows which included having John Sebastian sit in, and in a Doors rarity, also having Dallas Taylor sit in with John Densmore on drums. [thanks to Jim Cherry and The Doors Examiner, Redux]

Review (LA, Free Press)
Review by Liza Williams, "The Doors at the Forum - Morrison: The Ultimate Barbie Doll"
He isn't real because he is a poster or a golden record or an idol or a picture to kiss at night under the covers, a doll, he is the ultimate Barbie doll, and Barbie speaks when we pull her string, that's what she's supposed to do, and she only says what we want her to say because you see on the other end of the string is a piece of tape, that's why she is our Barbie doll and that's why he is our Jim Morrison and that's why we want him to sing "Light My Fire" and stop Stop STOP all these other strange sentences that the doll didn't say when we bought her, these new words on the tape, she has no right to new words, just do her thing which is our thing because we own her/him/ the ticket/the poster/the record/die idol.
[Sourced from "Riders On The Storm" by John Densmore, Arrow Books, 1991. p237] 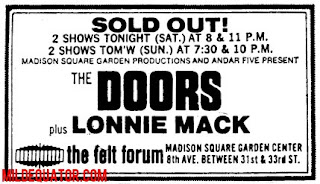 At the start of 1970, Jim was in Mexico, vacationing with Frank. The other Doors were in New York, anxiously waiting for Jim to show. After much work, and the posting of the usual "fuck clause" bond, the band was booked into the prestigious Felt Forum.
The telephone rang in Bill Siddons' hotel room.
"Uhh ... I missed my plane."
"Jesus, Jim." Bill instantly remembered Jim's call about a missed plane en route to Miami. "Jim, are you sober?"
"Well . . ."
The January 17 and 18 concerts—two shows each night— were regarded seriously by Siddons, the other Doors, and Elektra alike. The performances were to be recorded for the live album begun the previous summer. New York was where most of the editors and writers worked, and the Felt Forum appearances were supposed to prove that the Doors were still capable of performing as a band. A no-show—or, worse, another exhibition like the one in Florida—would be suicidal. 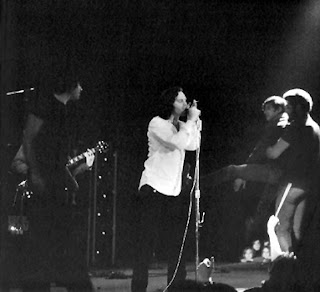 Siddons spoke in the exasperated tones of a parent. "Jim, did you make another reservation?"
Jim said yes and gave Bill the flight number.
"We'll have a limo waiting, Jim."
"Uh . . . Billy? Uh . . . there's a stopover in Miami."
"Jim? Will you please stay on the plane?"

After hanging up, Bill called for Tony Punches. "Get on a plane and get to Miami immediately. Intercept Jim. Meet the plane when it lands at Miami and make sure Jim stays on it. We'll book you back to New York with him."
The concerts were successful. Most of the songs they played were older ones:  "Moonlight Drive,"  "Back Door Man", "Break On Through," "Light My Fire," "The End."
. 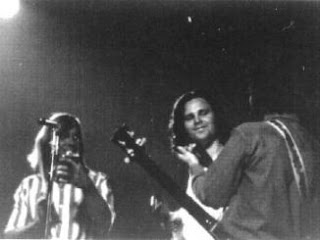 There were memorable moments, as when John Sebastian and Dallas Taylor, the drummer for Crosby, Stills, Nash, and Young, joined the Doors for a few songs during one show; and when a young homosexual heaved himself at Jim, locked his arms and legs around Jim's knees, and, after he was finally peeled off and carried away, Jim said casually, "Well, that's New York for ya. The only ones who rush the stage are guys." That line would be used (unexplained) in the live album. One that wouldn't be used came when someone tossed Jim a joint that was about as big around as pencil lead. "That's what I like about New York joints," he said, "you can pick your teeth with them." [Extract from "No One Here Gets Out Alive" Jim Morrison's Biography by Jerry Hopins and Danny Sugerman, Plexus Publishing, 1980 p278-279]
. 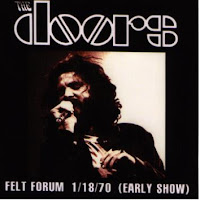 This post consists of MP3's (320kps) ripped from my JOKER CD Bootleg and includes the usual generic artwork.  This recording has been released under different titles (see alt cover right) as well as official double LP / CD sets entitled "The Doors: Live In New York" (artwork also included)
Even though the quality of the recording is pretty good (8/10)  it is a shame that several key tracks are missing - namely "Moonlight Drive" and "Light My Fire"
.
Track Listing 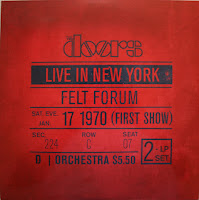