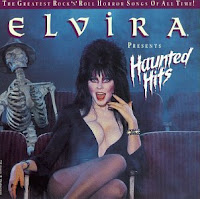 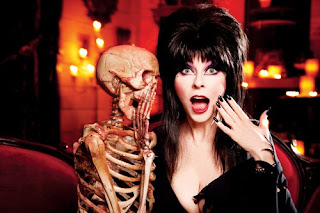 In 1987, Rhino released Haunted Hits, the first of three Elvira Halloween compilation albums. This grab bag of theatrically overbearing routines is most likely to amuse teenagers and drunk people, or more specifically drunken teenagers. It will however come in handy for regular folks of all ages who wish to throw Halloween theme parties that have nothing whatsoever to do with the authentic traditional cultural roots of Halloween (as in ancestor reverence) or the Day of the Dead as celebrated throughout Spain and Latin America. This campy to corny compilation briefly taps into Afro-American culture (Screamin' Jay Hawkins and La Vern Baker), twisted hipster goofiness (Lambert, Hendricks & Ross), and classic '50s-'60s pop culture (the Marketts, the Five Blobs, Sheb Wooley's "Purple People Eater," Vic Mizzy's "Addams Family Theme") as well as topical rock from Alice Cooper, the Cramps, and Oingo Boingo. The last of 17 tracks is performed by Elvira herself, kitschy and overbearing as ever. 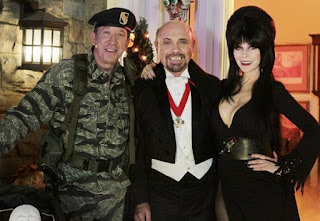 Elvira made a cameo appearance in Tim Allen's sitcom Last Man Standing (Season 1, Episode 4) entitled 'The Last Halloween' and played Ed Alzate's latest female companion.  Starring in one of my favourite TV sitcoms, it was a pleasant surprise to say the least, to see Elvira playing a seductive mistress.

A belated Halloween post, this month's W.O.C.K on Vinyl offering (MP3's/320kps) was gratefully sourced from Mr Weird & Wacky's blog and includes full album artwork. With tracks taken from TV shows such as  'Twilight Zone' and 'The Adams Family' to classics such as "Put A spell On You" and Skyhook's "Horror Movie", this collection of Haunted Hits has something for everyone, especially if you are into a little bit of Wizardry and Cleavage LOL 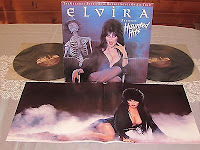