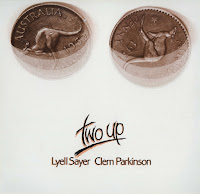 Clem Parkinson & Lyell Sayer have become to be regarded as an important part of the Australian folk community. These contemporary songwriters are still “having very pointed things to say about social issues” and they still form a key part of a tradition of writing from the stance of the union movement.

"Life in Australia can be very much like a game of two-up. Sometimes you land on the seat of your pants and sometimes flat on your face! Lyell Sayer and Clem Parkinson have seen both sides of the coin and it shows in their songwriting whether the subject be frivolous or serious. Here, on their first record is a collection of a dozen of the best. Not that this is the first time these songs have found an audience ... not by a long shot... for these musical 'pen pushers' have been churning out songs for years and songs like Colonel Sanders and the F-l 11 have, thankfully, become well entrenched in the repertoire of many of our local singers.
Both Lyell and Clem enjoy taking the 'mickey' out of our politicians and why not! I have always felt that these contemporary folk songs play a real role in continuing the tradition of the folk song as the voice of the people. Long may the likes of Lyell Sayer and Clem Parkinson write and sing songs about us!"
[Linear notes by Warren Fahey] 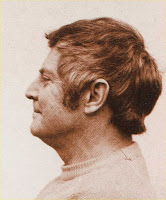 Clem Parkinson is a Melbourne Folk Song writer. In 1964, Parkinson penned the Pig Iron Song, which retold the story around how Menzies got one of his most well known nicknames. Clem Parkinson has also written many Union Songs (ie. Galloway and Stephens - a song about the fight for an 8 hour working day / 40 hours a week)

Clem's controversial song-attack on the Victorian government over the King Street Bridge reactivated old traditional vs contemporary tensions within the Victorian Folk Music Club.
Clem also had long history of support for the Maritime Union of Australia.
. 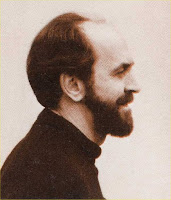 Lyell Sayer
Lyell Sayer is one of the legendary figures of Australian folk.
His songs have been covered by notables such as Wongawilli and Warren Fahey, and he is an inspiration to modern-day musical satirists such as Bruce Watson.
Lyell  has worked as a clerk, store man, driver, salesman, customs officer, as well as being a folk singer and song-writer for many years. His work with the Amalgamated Metal Workers' Union in Victoria in 1984 gave him and the union the opportunity to express a range of current issues and concerns through a medium not so common in workplaces - music and song. 'Stand by the union' is Lyell's contribution to a tradition of rousing union songs of solidarity in the 'Which side are you on?' mode.

He is best known for his song The F-111, regaling the many faults and failings of the RAAF's most controversial fighter jet acquisition of the 1970s. The General Dynamics F-111C was a controversial aircraft purchased by the Royal Australian Air Force in 1963. Problems began with a 10-year delay in delivery.

Lyell released a follow up album in 1984 called Victoria Street, also released on the Larrikin label. Lyell currently Tutors in Music at the The University of the Third Age in Knox, specialising in the Ukulele. More Info
.

Larrikin Records
In 1974, Warren Fahey’s Larrikin label began in Sydney. As noted earlier the first Larrikin release was an LP of Australian mining  songs 'Man of  the Earth'.
For twenty  years Larrikin would be the most important label in the Australian folk world. It released recordings of Eric Bogle, Clem Parkinson and Lyell Sayer, Jeannie Lewis, Peggy Seeger and Ewan MacColl, John Dengate, Denis Kevans, Dave de Hugard, Phyl Lobl and many other  songwriters and singers of the folk revival.
Larrikin also recorded the amplified folk band Redgum. Redgum became popular with the growing republican movement of the time and their debut LP 'If You Don’t Fight You Lose' was released on Larrikin in 1978. More Info
.


Clem's Songs
Track 2: Expense Account Racket
The boss has always been fair game for topical songwriters as evidenced by the prolific output of songs and parodies by the legendary Joe Hill and his fellow Wobblies. Dick Keam provides the stern authoritarian voice of management and for non-Victorians I point out that Rosebud is a seaside resort south of Melbourne patronised by the proletariat. (E,F,G,I)
Track 4: Mulwala
A nostalgic song about the town on the N.S.W. side of the Murray where I spent my early teens. Then a sleepy hamlet it is now in danger of of becoming a commercialised tourist resort, (E,F,G,HI)
Track 6: Colonel Sanders
Dedicated to a fast food service we'd really like to take away. Pass the Quick-Eze and singalong. (E,F,HJ)
Track 7: The Wimmin's Ball
The lament of an unfortunate all Aussie male who comes a cropper while attempting to gate crash a women
only dance. No doubt from now on he'll refere to the females a Ms. (E.H.I)
Track 9: Temperance Shearers
This song which won the Newcastle Trades Hall May Day song competition in 1971 is quite authentic as I did actually catch a glimpse of a shearing shed in the distance while driving along the Hume Highway some years ago. (E,F)
Track 10: Junk Mail
Would anyone care to swap a complete set of Clark-Maples furnishing brochures for a rare McEwans 1978 blue bordered summer sale catalogue? (E,F,G,H,I)

Lyell's Songs
Track 1: Walking Back to Bourke
My contribution to that large genre of songs concerned with the misadventures of pure young country folk down in the sinful city. A cautionary tale! (A,B,D)
Track 3: Squizzy Taylor
A narrative account of the rise and violent fall of the notorious Melbourne gangster of the 1920's. Written some years ago and well prior to the current revival of interest in him. (A,B)
Track 5: Words of Love
A simple love song, written for Lesley. (A,B,C)
Track 8: The F-l 11
One of my earliest songs, and certainly the most popular. My best claim to having written a 'folk' song as it has been recently collected from Vietnam veterans by Graham Seal. The last two verses written later by Clem to keep the song current, are gratefully acknowledged. (A.B.D)
Track 11: Life Begins at Forty
A poignant account of the horrors of turning forty from one who survived the ordeal. A middle aged lament for lost youth; listen and weep! (A,B,C,D)
Track 12: Matt Gabbett
An appetizing little ditty concerning junk food and cannibalism. Although a fictional character in Marcus Oarke's convict classic 'For the Term of His Natural Life', Matt is based upon the real Alexander Pierce who initiated and participated in the killing and devouring of six fellow convicts during successive escape attempts from the infamous Macquarie Harbour Penal Settlement and who was hanged in Hobart for murder. A folk hero for our times! (A,B,C) 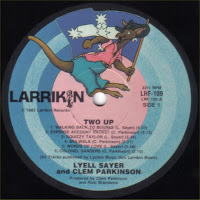 This post consists of MP3's (320kps) ripped from an extremely rare 'near mint' vinyl copy which I stumbled across at a garage sale some months ago. I was blown away when I listened to this album for the first time - such talented musicians and song writers. Both artists complement one another beautifully with their individual contributions on this 'two sided' gem.  If you enjoy folk music with an Australiana take, then you're just gonna love this album.  Full album artwork and label scans are included.
.
Track Listing 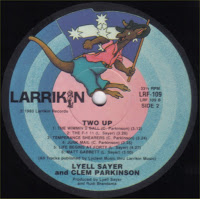