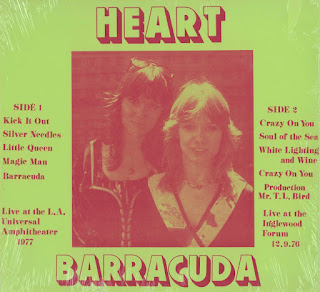 Heart were a melodic Canadian rock sextet led by the songwriting Wilson sisters and formed in 1974. They signed to the indie Mushroom label, who issued their debut album, 'Dreamboat Annie', in 1976. The first single 'Crazy On You' only grazed the Billboard Top 40, but the follow-up 'Magic Man' became a Number 9 hit and established the band in the US. After they switched to CBS subsidiary Portrait Records, Heart's next album, 'Little Queen', further refined their fusion of hard-rock with folk and the blues. A string of successful
albums ensued with 'Magazine', 'Dog and Butterfly' (1978) and 'Bebe Le Strange' (1980) achieving Top 20 placings, the latter reaching Number 5. Fisher quit at this point, Nancy Wilson taking on additional guitar duties. 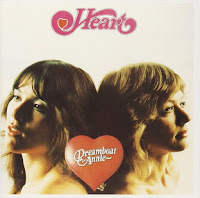 'Private Audition' (1982), various personnel changes and 'Passionworks' (1983) signaled a downturn of fortunes. Enlisting producer Ron Nevison and switching to Capitol Records, their 1985 self-titled release saw a remarkable comeback. The album reached Number 1 and produced four US Top 10 hits: 'Never' and the chart-topping 'These Dreams', 'Nothing At All' and 'Alone'. Though not quite as successful, 'Bad Animals' (1987) and 'Brigade' (1990) were both Top 10 albums in both the UK and the US. 1993's 'Desire Walks On' lagged some way behind.

"Wilson women have cleavage.
It's in the family. We think it's beautiful." 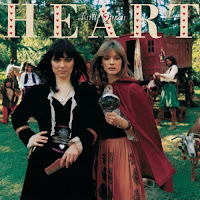 As a concept, it was a beaut - the Wilson sisters, Ann and Nancy, brunette and blonde, playing heavy rock, kind of Abba with decibels. There was also a touch of the Fleetwood Macs about Heart: Ann was involved with guitarist Roger Fisher, while Nancy was stepping out with his brother, the band's soundman; by the time those relationships ended they had established a mainstream melodic rock style on singles like 'Magic Man' and 'Barracuda'. When the formula threatened to stagnate in the mid-80s, new label Capitol re-focused Heart onto a string of power ballads - These Dreams', 'Nothing At All' and 'Alone' (another US Number One for the Steinberg/Kelly songwriting team who'd created 'Like A Virgin' and True Colors'). This new lease of life was given an additional fillip when their Bad Animals studios found itself at the centre of Seattle's musical renaissance, and the Wilsons consorted gamely with the new generation of Soundgarden and Pearl Jam. [extract from The Book Of Rock by Phil Dodd. Hardie Grant Books, 2001. p202]

Interview
Hailed as “the first women of rock” and “feminist icons” by fans and critics alike, Ann and Nancy Wilson made an indelible impact on the direction and sound of American rock music. That’s why, on April 18 2016, Heart were inducted into the Rock and Roll Hall of Fame in L.A., alongside Rush, Donna Summer, Quincy Jones and Albert King.

In an interview with Heart by Rock Cellar Magazine, some insight into what it was like for Heart in the 70's is explored:

RCM: You have a long history with Canada going all the way back to 1975, when you recorded Dreamboat Annie, at Can-Base Studios in Vancouver.

AW: Oh yes. Canada is unlike anywhere else in the world. It’s very… how do I say this without sounding weird…?  It’s a country that sort of keeps to itself, in its really fresh way. It doesn’t seem overrun by the fact that its next door neighbor is the U.S. 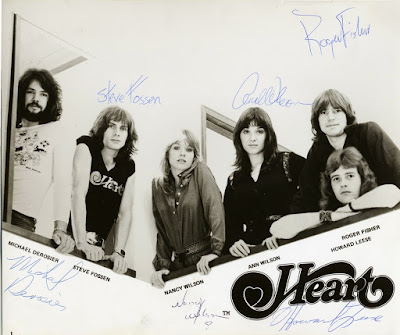 RCM:  You lived in Canada for awhile, right?

AW:  Right.  I remember when I was living up there in Vancouver, the whole political scene at the time in the ’70s was so anti-war in the States. There was so much turmoil and everyone was involved. But up in Canada where I lived, people would just sit in the pubs and sort of laughed about it; they didn’t get involved, and I thought that was so refreshing somehow. Anyways, my point is that it doesn’t allow itself to be anything but Canada.

RCM:  In the early days of Heart, you and Nancy were glamorized as much for being sex symbols as for your music.  How did you feel about that at the time?

AW: Well back then, women in rock was still like this new issue that journalists – especially male journalists – were struggling with.  They were trying to figure out how these girls could be really sexy and yet be equal at the same time.  And in a lot of cases, they couldn’t figure it out! (laughs).
I really don’t think they knew what to do with us, because there wasn’t a precedent.  It took a long time for us to be taken seriously, and for us to find so-called credibility, especially among the rock press. 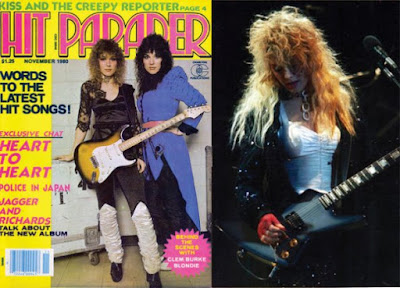 I remember hearing someone say, “Boy, that Nancy is a fine looking girl – but is that guitar really plugged in?”

RCM: The song Barracuda was directly about that, right – being attractive women in the music business?

AW: Barracuda was actually written in anger by me, after this one really sleazy guy comes up to me after a show and says to me, “So, Annie, how are you and your lover doing?” referring to Nancy. Here was this guy trying to make my relationship with my sister into this girl-on-girl, nasty old man thing that I guess was really exciting to him. So afterwards I wrote the words to Barracuda.

And those experiences were frustrating, as Nancy and I were working really hard, trying to bring this message out which was, “Who cares if we’re women? Why can’t we just go ahead and do this, have our art and make our music?”

RCM:  Your voice is known as one of the most powerful ever in rock and roll.  How do you yourself feel your voice has changed over the years? 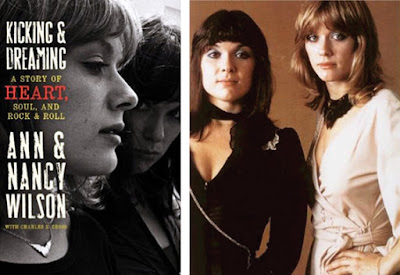 AW:  When I listen to myself sing now compared to the real early days, I can tell that I was so much younger – my voice just sounded way higher and more like a young girl.  Now it’s got more body to it.  It’s deeper.  But I think I probably have better pitch now, and I probably know a little more about restraint now than I did back then.  Compared to albums like Little Queen, Magazine, and especially Dreamboat Annie.

When we did the box set Strange Euphoria last year it was really interesting for me to listen to old tapes, as it reminded me how I used to sing a song.  Hearing demos of Magic Man and Crazy On You, I realized how we’ve changed the songs a bit over the years.  That process helped me think about singing those songs a little more like how they were originally written. [extract from rockcellarmagazine.com]
.
This post consists of MP3's (320kps) ripped from my 'Amazing Korny Fone Label' bootleg that has been rated as Ex Stereo by Hot Wax, but really only applies to Side 1.  Side 2 is far less superior and required some amplification enhancement on my part to bring it up to the same level as Side 1.
Full album artwork (coloured photo on the back) is included along with label scans.
Side 1 is listed as having being recorded at L.A. Universal Amphitheatre, 1977 and is either an edit or a partial broadcast of a King Biscuit Flour Hour broadcast.
Side 2 was recorded live at the Inglewood Forum 12.9.76
The bootleg labels are fake of course (a common feature of Amazing Korny Fone bootlegs) and say DragonFly Records present "The Sounds Of The '60's - A Musical Documentary - number 5 in this series"
. 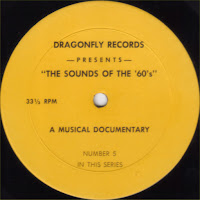 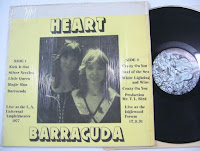