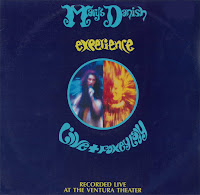 Mary's Danish, which came together in Los Angeles in the late '80s, was itself a diverse lot — in personality and background — that served up funk, pop, punk and country. The blending of the last two genres clearly betrays the influence of X, from whom lead singers Gretchen Seager and Julie Ritter also inherited intricately woven harmony vocals. They were joined in Mary's Danish by bassist Chris "Wag" Wagner, drummer James Bradley Jr., guitarist David A. King and second guitarist Louis Gutierrez, who had played in the Three O'Clock. All were accomplished musicians with an uncanny pliability, but their secret weapon was frequent sax sideman Michael Barbera, who added jazz and R&B flavor to the mix. Mary's Danish were as varied thematically as they were sonically, with religion, domestic violence, social criticism and biting self-analysis all receiving narrative attention. 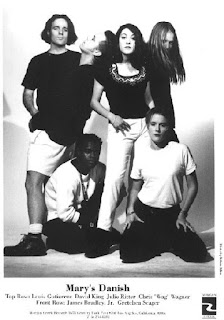 The newly cemented group signed with Chameleon Records in 1989 and released their debut album 'There Goes the Wondertruck'. It featured the single "Don't Crash the Car Tonight" which gained the band an initial following. The band had some early success, and was chosen by Robert Hilburn of the Los Angeles Times as one of 1989's brightest newcomers. That same year they were listed by Rolling Stone magazine as one of their "Top Five New Faces." Hollywood Reporter referred to the band in a review as having "spirited anarchy and rock solid musicianship."

A live album was released later in the year titled Experience (Live + Foxy Lady). Five of the six live tracks on Experience are more fully realized versions of songs from 'There Goes the Wondertruck', particularly a frenzied, beefier "Blue Stockings" and the high lonesome croon of "It'll Probably Make Me Cry." The disc's studio track, a riotous take on Hendrix's "Foxey Lady," slyly recasts the classic rock staple with a letter-perfect Led Zeppelin quote inserted into the bridge. 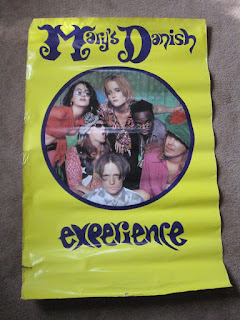 Their live mini album Experience, sold well enough to attract the attention of both superstar manager Peter Asher and Morgan Creek Records, a newly formed label headed by producer David Kershenbaum and spun off from a successful film production company. Eager to score an "alternative" band when that genre was becoming the next big thing, Morgan Creek threw quite a bit of money at Mary's Danish to record and release their second album, Circa, in 1991. Unfortunately, the neophyte label dropped the ball on promotion, and although the singles "Julie's Blanket" and "Foxey Lady" (a winningly sarcastic treatment of the Jimi Hendrix classic) got a lot of MTV airplay, the well-reviewed album didn't sell as well as 'There Goes the Wondertruck'.

The band subsequently switched to Morgan Creek Records, with Circa being released in 1991 and American Standard in 1992. However, the experience with Morgan Creek was from all accounts not a happy one, and a dispute with the label ended with the band and Morgan Creek parting ways. However, their 1992 cover of "I Fought the Law" was featured in the film Buffy The Vampire Slayer (1992), and the accompanying soundtrack release Buffy the Vampire Slayer Soundtrack.

Since leaving Morgan Creek in 1992, the band has not released an album and have not made any announcements about recording any other music as a group.

In 1993, Mary's Danish backed Neil Diamond on his Asher-produced album Up on the Roof: Songs From the Brill Building. Following a series of contractual disagreements with their label, the frustrated band became inactive in 1994 and broke up a year later.


Bradley and King, with some help from Wag, formed Rob Rule with Robbie Allen, Edward Anisko and Steven Ossana. Their album is tepid southern rock whose low point is an uninspired replication of the Allman Brothers' "Melissa." Allen would later record as Thermadore, once again enlisting the Mary's Danish rhythm section, along with guests Smith and Stone Gossard of Pearl Jam. 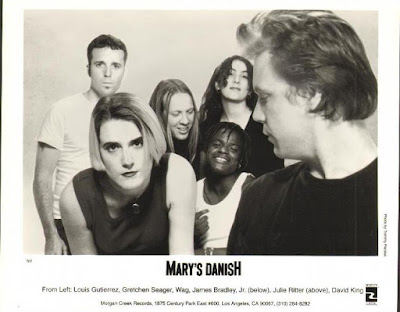 From the ashes of Mary's Danish rose Battery Acid, comprised of Gutierrez and Seager (who had married), with Wag on bass and David Harte on drums. 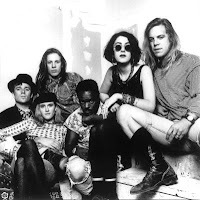 This post consists of MP3's (320kps) ripped from my vinyl Mini LP which I came across at the market while rummaging through a pile of records that were mostly rubbish. This album jumped out at me because of the cover and title. It's cover artwork was psychedelic and the words Experience & Foxey Lady grabbed my attention immediately.
Having not heard of Mary's Danish before, I was still prepared to pay the 1 dollar to have a listen. And how stoked was I when I put it on my turntable at home and heard this powerful L.A band for the first time. Every tack on this mini LP is a killer track and their rendition of Hendrix's "Foxey Lady" is the highlight.
So why don't you EXPERIENCE Mary's Danish for yourself  now by downloading it, using the link below. 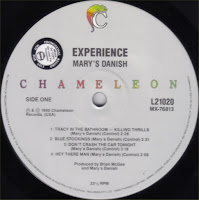 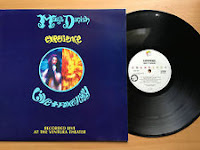 * Recorded live at the Ventura Theatre