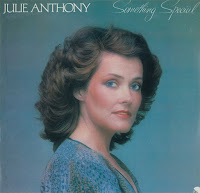 The career of this soprano, musical entertainer and cabaret performer spans more than four decades, with highlights including a performance of Advance Australia Far at the Sydney Olympics opening ceremony. She was made an Officer of the Order of the British Empire (OBE) and a Member of the Order of Australia (OAM) for her services. Last year she was inducted into the South Australian Music Hall of Fame.

Julie Anthony was born in Lameroo, S.A on 24 August 1949 (population 15) and raised on the family farm. In her teens she began singing with a local band and in 1970 won an amateur television talent quest. Her victory and the first prize ($600 and a trip to Tasmania) led to regular appearances on the Adelaide Tonight Show. She moved to Sydney, making television appearances and performing on the club and cabaret circuit, and eventually embarking on international tours. An engagement at the Hong Kong Hilton in 1973 was followed by the lead role in the Australian production of Irene. Three years later she starred in the UK version at the Adelphi Theatre. The Play and Players of London honoured her with the Best Newcomer (Actress) award for 1976. 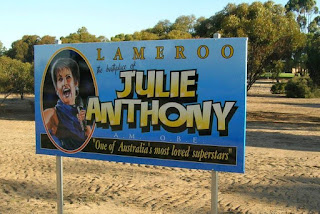 She returned to Australian television and appeared in three national specials, and in the same year she married her manager Eddie Natt. In 1977 she won the Sammy and Penquin awards for Best Television Variety Performer. Tours of America followed and Anthony worked with Bill Cosby, Roy Clarke and Merv Griffin. In 1980 she was awarded an OBE for services to the entertainment industry. Three years later she accepted the role of Maria in The Sound Of Music; following a season in Sydney, the show successfully toured major and regional centres.

For the 1988 World Expo held in Brisbane, Anthony was invited to sing with the re-formed Seekers, joining the group as lead singer from 1988-89. They released an album Live On in March 1989, which peaked at number 26. In 1988, she sang the national anthem at the official opening of Australia’s new Parliament House. The same year she returned to the stage in I Do!, I Do! In 1990, she was awarded AM in the Order of Australia for services to the entertainment industry.

In 1994, Anthony further demonstrated her versatility by teaming with jazz musician Don Burrows (reeds/flute) for tours, including a successful appearance at the Jazz and Blues Festival at the Gold Coast International Hotel in 1995. A year later she returned to cabaret with a season at the Tilbury Hotel in Sydney. In her extensive repertoire she demonstrated great conviction, whether singing ‘Amazing Grace’ or material ranging from Stephen Sondheim to the Beatles.

In June 1996, she accepted a cameo role as a band singer in the Bruce Beresford film Paradise Road, starring Glenn Close and Jean Simmons. Julie Anthony is one of the best and most durable
theatre and variety performers in the post-war Australian entertainment industry. She has won the prestigious Mo Award for Entertainer Of The Year three times, and Best Female Variety Performer nine times. An admirable singer and engaging personality, she has successfully blended her career and family duties.
.
This post consists of FLACs taken from my pristine vinyl and includes full album artwork and label scans.  This album is 'something special' with some great covers like Harry Nilisson's "Without You", Barry Mannilow's "I Write The Songs" and Neil Sedaka's "Laughter In The Rain".
With strings arranged by Tommy Tycho, and also co-producer on this album, this recording is top notch and shouldn't be missed.
.
Track Listing
01 - My Day 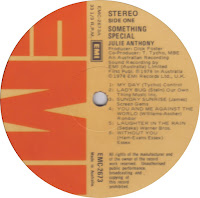