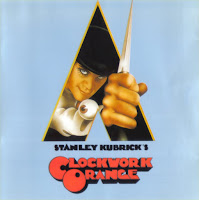 In future Britain, charismatic delinquent Alex DeLarge (played by Malcolm McDowell) is jailed and volunteers for an experimental aversion therapy developed by the government in an effort to solve society's crime problem - but not all goes according to plan.

Alex's first lines were: There was me, that is Alex, and my three droogs, that is Pete, Georgie, and Dim, and we sat in the Korova Milkbar trying to make up our rassoodocks what to do with the evening. The Korova milkbar sold milk-plus, milk plus vellocet or synthemesc or drencrom, which is what we were drinking. This would sharpen you up and make you ready for a bit of the "old ultra-violence". 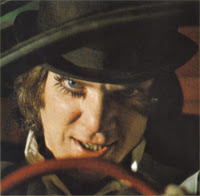 It was that expression "a bit of the old ultra-violence" that has stuck in my mind for over 40 years and has intrigued me so much with this controversial and confronting movie.  And so, I thought it appropriate to make Clockwork Orange the focus of this month's WOCK on Vinyl post. C for Clockwork and O for Orange of course, but also W for Wendy/Walter, C for Carlos and K for Kubrick.

Some Interesting Movie Facts
According to author Anthony Burgess, the title of the book (and the movie) came from East London slang, deriving from the phrase, "as queer as a clockwork orange." No independent references are known, however, and it is thought that Burgess invented the phrase himself.

Malcolm McDowell's eyes were anesthetized for the torture scenes so that he would film for periods of time without too much discomfort. Nevertheless his corneas got repeatedly scratched by the metal lid locks. After Malcolm McDowell's cornea was scratched during the filming of the Ludovico treatment scene, he insisted to Stanley Kubrick that the extreme closeup of his eye in lid-locks be postponed until the last day of production. 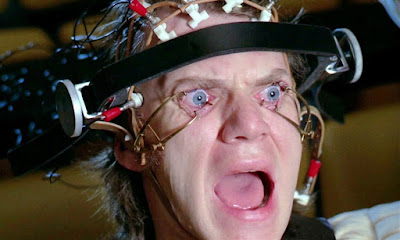 The snake, Basil, was introduced into the film by Stanley Kubrick when he found out Malcolm McDowell had a fear of reptiles. This was to make McDowell's character seem more intimidating, and as a practical joke by Kubrick.

Contrary to popular claims, this movie was never banned in the UK. It originally received an "X" rating in 1971 and was withdrawn from distribution in 1973 by Stanley Kubrick himself. One of Kubrick's reasons for withdrawing the movie in the UK was that, according to his wife Christiane Kubrick, he and his family received several death threats because of the film. In the 1980s and 1990s, British fans who wanted to see this movie would have to order it from video stores in other countries, usually France. 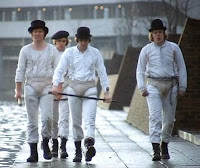 Author 'Anthony Burgess' originally sold the movie rights to Mick Jagger for $500 when he needed quick cash. Jagger intended to make it with The Rolling Stones as the droogs, but then re-sold the rights for a much larger amount. Burgess also initially distrusted Kubrick as a director, but was happy with the results.

In the music shop scene there is a list of Top Ten music bands up on the wall. One of the bands listed is Heaven 17, which one of the girls mentions to Alex. This name was used by a real band in the 1980s.

Some Interesting Soundtrack Facts
In the music shop scene where Alex asks the shopkeeper about an order he'd placed, there is a record cover clearly visible at the front that says 2001: A Space Odyssey (1968), Stanley Kubrick's previous film.

Clockwork Orange was the first movie to make use of Dolby sound, it used Dolby noise reduction on all pre-mixes and masters, but a conventional optical sound track on release prints. 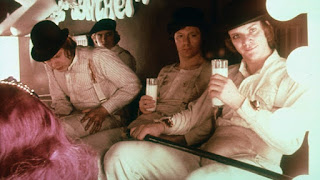 Stanley Kubrick asked Pink Floyd if he could use their "Atom Heart Mother Suite" in the soundtrack. However, because Kubrick wanted unlimited license to determine what portions or edits of the song he used, the band turned him down.

When Alex is in the record store, we can see the soundtrack of Kubrick's own movie 2001: A Space Odyssey (1968) on a lower shelf with "Atom Heart Mother" above it (look for the cow in the field). Other records visible in the shop are Tim Buckley's "Lorca" (1970), on the Island shelf when Alex enters the shop. "Atom Heart Mother" is visible on this shelf as well as behind the counter. Also on this shelf is Rare Bird's "As Your Mind Flies By." Two records to the left of the "2001" in front of the counter is Crosby Stills Nash & Young's "Deja Vu" (1970). To the right of "2001" is "The Transfiguration Of Blind Joe Death" by John Fahey. Between The Beatles "Magical Mystery Tour" and "Atom Heart Mother" on the wall behind the counter is Neil Young's "After The Goldrush" (1970). The first Chicago album "The Chicago Transit Authority" (1969) can also be seen. The blonde girl with the lollipop can be seen looking at a Mungo Jerry album, "In the Summertime" (1970). 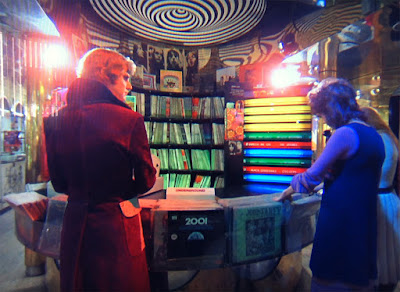 Wendy Carlos's (born Walter) synthesized score features the first ever use of a vocoder. The two pieces featuring Carlos's custom-built vocoder, "Timesteps" (an original composition, heard during the Ludovico sequence) and Beethoven's "Ode To Joy" from his Ninth Symphony (heard in the record shop) were recorded long before the film was made. The vocoder, according to Carlos, was a development from an earlier, unsuccessful voice synthesis method she'd used on her 1969 album "The Well-Tempered Synthesizer", and she'd implored synthesizer inventor Robert Moog to come up with something better using standard Moog Synthesizer modules. "Timesteps" and Beethoven's Ninth were recorded as test/demonstrations of the new device, and she brought them to "A Clockwork Orange" when Kubrick hired her to score the film. At Robert Moog's memorial service, Wendy Carlos admitted that the tracks were recorded at 1/2 speed (7.5 ips), then played back at 15 ips simply because she couldn't play a monophonic keyboard at full, standard tempo. This is actually not an uncommon recording technique.
.
This post consists of MP3's (320kps) ripped (with of course, a bit of the old ultra-violence) from CD and includes artwork for both CD and LP.  Alternative album cover is also depicted below. 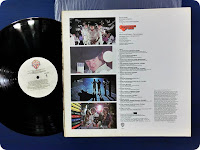 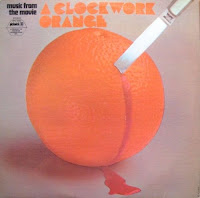