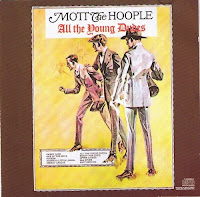 Formed in 1969 and named after a character from a Willard Manus novel, Mott the Hoople were heavily influenced by both Bob Dylan and traditional rock'n'roll. They achieved only modest sales with their first four albums, but David Bowie's association with the band revived their fortunes in 1972, just as they were about to quit. 'All The Young Dudes', written and produced by Bowie, resulted in a US Top 40 and UK Top 5 hit.

Allen left following the 1972 US tour and was later replaced by ex-Love Affair keyboardist Morgan Fisher. 1973's 'Mott' went to Number 7 on the UK album chart and produced two Top 10 hits, 'Honaloochie Boogie' and 'Roll Away The Stone'.

Ralphs' decision to quit (he went on to form Bad Company), was precipitated by Hunter's rigid control over musical direction. Ariel Bender (Luther Grosvenor, ex-Spooky Tooth) was recruited to record 'The Hoople' (1974) which emulated its predecessor and provided two more hits - 'The Golden Age Of Rock'n'Roll' and 'Foxy Foxy'. 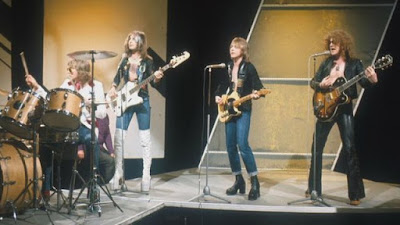 A live album followed, before internal disputes saw various line-up changes including the arrival of ex-Bowie guitarist Mick Ronson. The band split after recording the 1974 single 'Saturday Gigs'. Fisher, Watts and Griffin soldiered on with new recruits as Mott, recording two unsuccessful albums.
Hunter embarked on a solo career aided by Ronson (producing the classic "Once Bitten Twice Shy"), and was an on-off association that continued until Ronson's death in 1993. [ extract from The Encyclopedia Of Rock, by Michael Heatley, RD Press, 1996, p 80]
.

Mott The Hoople Split Up
On March 26,1972, Ian Hunter, lead singer and rhythm guitarist with English rock band Mott The Hoople, sat down to write a lyric expressing his anguish at the fact that the Hoople had just decided to split up. Despite a fanatical live following and four well-regarded, if inconsistent, albums, a commercial breakthrough for the ensemble had never materialized. "Rock 'n' roll's a loser's game" ran the mordant refrain of the composition in question, "The Ballad Of Mott The Hoople."
Then a miracle occurred. A fan heard of the split and decided to try to help them. That fan happened to be David Bowie, just about to become one of the biggest stars in the world via his ... Ziggy Stardust... album. 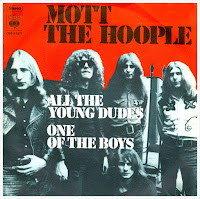 He gave them a song to record - "All The Young Dudes" - that finally gained them a genuine hit and also seemed to focus their minds. Many of their own songs now followed the template of"... Dudes," mythologizing rock in the way that Bowie's song did - although not glamorizing it. Their classic 1973 album Mott was a set almost exclusively dedicated to the subject of the trials and tribulations of being in a struggling rock band. The centerpiece of it was that cry of despair "The Ballad Of Mott The Hoople." 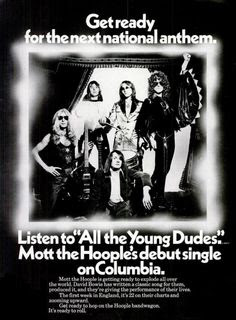 Hunter had a knack for the valediction. The next time the Hoople split - for good this time in 1974 - he penned the moving farewell and thank-you to Hoople fans "Saturday Gigs." [by Sean Egan,Defining Moments in Music, Cassell Illustrated, 2007. p428]
.
This post consists of  FLACs ripped from my trusty Ol' LP that has seen more parties and booze fests than I'd like to remember.  But be assured that it has survived better than I did and still plays really well (please read - it's still got character)
Full album artwork are included for LP and CD and I've taken the liberty of including their early cover version of the Kinks classic "You Really Got Me" from 1969.  Hope All You Young Dudes out there enjoy listening to this heavily influenced Bowie LP by some classic Glam Rockers
.
Track Listing 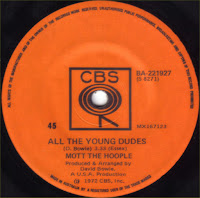 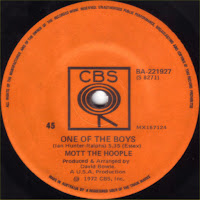