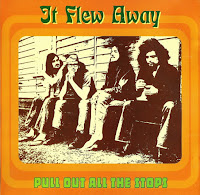 Rare Australian progressive / psychedelic rock from Melbourne-based group It Flew Away, taken from their only album 'The Lounge Room Tapes', which was recorded in 1972 but privately released in 1987 as a double LP in a small run of 250 copies.

Finally the music of this great Melbourne band is available on CD!  Previously some of this material was released on a totally independent 2LP set in the late 80's, however this has been remastered from the original tapes recorded in 1972. Great keyboard/guitar interplay throughout makes this an essential addition to every Aussie 70's progressive rock collection. These guys were certainly the unluckiest band of the era in that, with all the abundant talent on show they never got to release any records at the time.

It Flew Away was a band whose story seems to sum up the hopes and aspirations of so many outfits who played their guts out to very little critical acclaim. This was in an era when simply being able to express one's musical ideas in a public forum was considered by many to be reward enough to make the long hours of rehearsal and equipment lugging seem worthwhile! 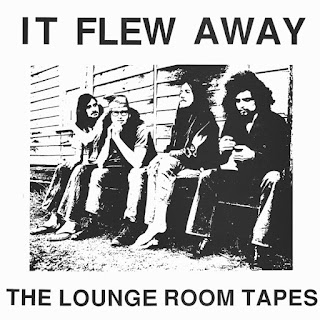 Early in 1971 Ian Clarke (keyboards), Barend du Preez (bass, vocals and harmonica) and John Reid (guitar) were living in a defunct private hospital in Prahran, writing songs and thinking only half seriously about forming a band. John's brother, Rob, took the initiative and put an ad in the Source Bookshop in Melbourne... Wanted - Creative Drummer. Guitarist, bass player and organist, writing own music, seek sincere musician to develop a group from embryonic stages to something satisfying.

In August, Shane Cleary turned up, and on a cold grey day, over a bowl of hot millet, It Flew Away was born. The band's first gig was in early December, supporting Carson at Ocean Grove, a coastal town on the outskirts of Melbourne. Then followed an appearance at Evolution ("Australia's biggest holiday dance in the heart of swinging Rosebud"). At about this time an American promoter was developing the Regent Theatre in South Yarra as a Fillmore-style concert hall Billed as a 'mixed-media palace', it promised to be an exciting new venue for rock music in Melbourne. 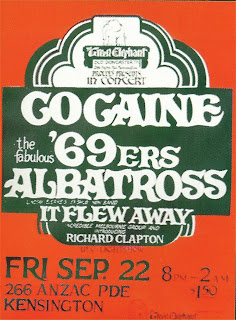 The Regent wanted new talent, and It Flew Away wanted a place to play, so a short, but exciting association was formed. On New Years Eve they played The Regent for the first time with Spectrum, Friends, Carl & Janie Myriad, Blackfeather and The Joy Band. With earnest expressions they presented their collection of lengthy and extravagant musical images, in front of the Stargate Corridor light show.

They won a Battle of the Bands at Buronga on the Murray River near Mildura, and seemed to be achieving some recognition among informed writers in the music press. But all was not well. The Regent burned down and the Much More Ballroom closed. Taking note of these events, the band invested in a custom built PA. system that became endearingly known as the 'D.S.H.', and after a couple of live engagements, the 'D.S.H.' blew up! At least one band member believed that music could save the world, but despite this idealism, by early 1973 they were silting on the floor of Phil Dwyer's panel shop cum studio, tearing strips off each other.

Sympathetic audiences were scarce, and efforts to support It Flew Away with a theatrical rock and roll band called Thicket Ducks, and later, a straight outfit called The Pub Band had failed. Idealism was no match for a lack of equipment, and with poverty lurking just around the corner, It Flew Away would fly no more. It Flew Away really had it all, ambitious keyboard passages combined with a great guitar sound and tough rhythm section making their sound far more memorable than most symphonic rock outfits of the day.

The almost six minute opening track 'On My Way Home' has classy guitar/keyboard interplay and practically sets the tone for all the material on this release. From the epic 'Good Times' with its fantastic guitar lines, soaring keyboards and interesting lyrical content (du Preez even managed to incorporate some Tolkien imagery), to the wildness of 'Candy...' or the last track 'Pull Out All The Stops Mother', everything here is played with 100% confidence by a band on the brink of greatness, but nonetheless, one whose members never saw the door of opportunity open for them. 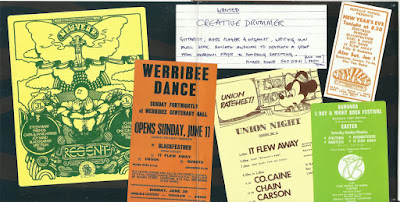 It had been a creative period in four peoples lives, at times joyful and positive, at others turbulent and difficult. And so to the passage of time... Fortunately for the band, they had loyal friends in Carl Hartung and Ross Williams, to whom a great debt is owed for the existence of a cache of well recorded tapes containing a number of versions of different songs, without which this music would inevitably have faded with time and memory. It was always Hartung's ambition to make an album using this material which had been hidden away in dark cupboards for many years, with only the occasional airing.

In 1987 he and Reid worked together to create a compilation reflecting various facets of the band's songwriting. Eventually, after a great deal of effort everything fell into place, and a 2LP set was produced, primarily for fans and friends in a limited edition of 250 copies. It Flew Away The Lounge Room Tapes finally saw the  light of day, sold-out and  disappeared! [by Carl Hartung and Glenn Terry - CD Booklet]
.
This post consists of FLACs and MP3's (320kps)  ripped from the Vicious Sloth re-issue CD (now out of print) thanks to Marios.  Full album and booklet artwork is included.
This album would have to be be one of the hidden treasures of the 70's, and probably one of the rarest progressive Aussie rock albums ever released because it literally flew away !
.
Track Listing
01.  On My Way Home (B.du Preez) - 5:54
02.  Good Times (B.du Preez) - 9:16