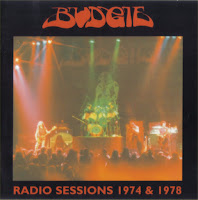 Looking back to 1970's most major rock bands released at least one live album in order to capture the excitement and spontaneity of a live performance. It therefore seems unusual that Budgie or their record companies of the period did not pursue this avenue to the fullest extent. Budgie were essentially a live act and the studio albums did not truly capture the same excitement as a live concert.The only official live recordings from the period appear to be concerts broadcast by radio.

In 1974 the original drummer Ray Phillips had left the band and a replacement was needed to fulfill tour commitments. Pete Boot was drafted in and due to an album being required by the record company he ended up staying to record the album. As Burke has said of the period " it was chaotic, we were trying to rehearse the live set, do the shows and write and record new material for the new album". 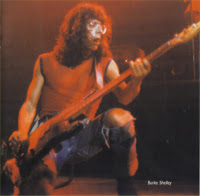 One of the shows from that time was broadcast from Global Village, London in March 1974, a few weeks before the new album In For The Kill was released. It subsequently went on to enter the top 30 album chart.This show contains early versions of Hammer and Tongs and Zoom Club from the 'In For The Kill' album.The recording quality of I974's radio is a long way from recordings that are done with today's technology however due to so much interest in the band in it's early days this show is now presented in it's entirety and contains previously unreleased tracks. 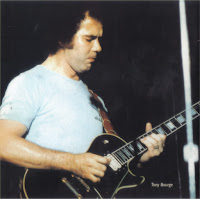 In 1977 and 1978, now with Steve Williams on drums, Budgie spent long periods of time in America and Canada where they toured and recorded the Impeckable album. In May 1978 a live show was broadcast from Los Angeles.This concert contained material from the new album Impeckable and featured Myf Issac on second guitar.This show was to be one of Tony Bourge's last with the band and whilst the recording is far superior to the broadcast from London in 1974 it also shows that the band had progressed musically and the performance was a lot more polished.Tony's departure led to a short period of decline for Budgie when musical tastes were changing in Britain and it was to be two years before they regained their status as a major act.

Enjoy these recordings for what they are, with such a shortage of live Budgie material from the 70's, they are a piece of history.
. 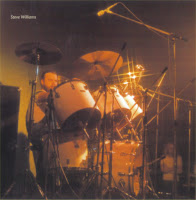 Review
I bought the older "Heavier Than Air / Rarest Eggs" release some time ago and wasn't sure whether to buy this one to get the few extra 1974 tracks, but I'm glad I did. The 1978 gig serves as the live album Budgie never released at the time - a well recorded great performance which no Budgie fan could be disappointed by, other than missing the odd classic tune such as 'Napoleon Bona-Parts 1 & 2', while 'Breaking All the House Rules' takes on a slightly over-enthusiastic tempo. Being 'remastered' has not made a revolutionary change in sound compared to the previous release however.

The 1974 tracks sound much better than the two tracks included on Rarest Eggs. The recording meets the quality of a very good bootleg: it's from a good desk mix but is hissy and with occasional tape dropout. This latter causes the odd unscheduled drift in panning & the occasional increase in background noise. There are fades in the applause and announcements between some tracks and 'Hammer and Tongs' fades just before the end. However, it's a fantastic performance, it flows from track to track and has real atmosphere and energy. The only problem is that it is now out of print (as stated on Budgie's website), so if you are after the real deal, then you'll have to source it on eBay or alike.

This post consists of  FLACs ripped from my CD double set and includes full album artwork. Although I normally avoid publishing CD only releases, the fact that these recordings were made in the 70's but never released until recently (2005), and have been referred to as an 'official bootleg' release; I will make the exception here. Likewise, this CD set is no longer available for sale from Budgie's website.
.
Track Listing 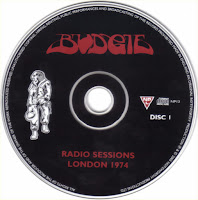 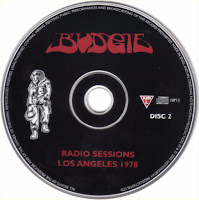 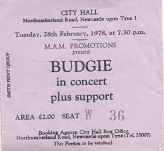