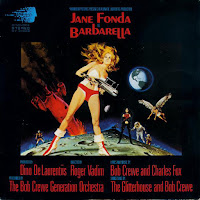 Barbarella is a 1968 French-Italian science fiction film based on Jean-Claude Forest's French Barbarella comics. The film stars Jane Fonda in the title role and was directed by Roger Vadim, who was Fonda's husband at the time. The film was not popular in the US at its release, but received greater attention afterward with a 1977 re-release. It has since become a cult film, and I just love it (read Jane Fonda).

The Plot
Ho Chi Minh's favorite exercise queen stars in this amazing piece of science fiction, oh yes, Jane Fonda. What really amazes me is the movie's PG rating, considering the fact that Barbarella's anti-gravity breasts go bouncing through a few scenes sans clothing. (Plus there's another woman hanging from leather straps later on.)
Don't try and give me all that, "It was the 60's." crap either. Our heroine is dispatched to prevent a new weapon from destroying the harmony of the known universe. If one thing was threatening harmony it is this movie's soundtrack, I was torturing the cat by humming snippets to it. (Kitty actually fled the room.) After her spaceship crashes things really get weird, she encounters wild children, leather robots, Pygar, the Great Tyrant, and carnivorous parakeets.

When Barbarella finally locates Duran Duran (so that's where that band name came from) the scientist is a madman, seeking to conquer the universe and give her a fatal orgasm. I didn't stutter my friends, he straps the woman into a strange "pleasure organ/piano" thing and plays a tune which should kill her with ecstasy. It doesn't work, Barbarella shorts out the machine and it bursts into flames. Soon after this the Great Tyrant sets free the Magmous and all heck breaks loose, the end. If that wasn't warning enough I'm telling you now: This movie is all over the place and insanely groovy.

After the shock of watching Barbarella strip out of her spacesuit in zero gravity (She's obviously laying on plate glass with the camera above her.), I noticed the red shag carpet covering the spaceship's interior top to bottom. For a state of the art spacecraft her ship had some issues, like the acid trip view screen and a disturbing habit of colliding with solid objects, like a planet. Let's not forget this is the future and all the messy pleasure associated with that disgusting habit of sexual intercourse has been overcome, now you just take a pill and hold hands... ...until Barbarella gets her pipes cleaned by Marcan, then she does agree "Wider is..." I mean, "The old ways are better."

This 60's soundtrack definitely fits the WOCK on Vinyl criteria, it's Wacky, Crazy and super Korny. But mostly, it's soooo 60's. Hope this brings back wonderful memories for some of you, and if you haven't seen the movie yet,  then leave your brain in another room, watch the movie, and have fun with it. It's a cult classic.

Thanks to Mr Weird and Wacky for the Rip and the BadMovies Website for providing some insightful information about the movie. The soundtrack is here for your enjoyment.