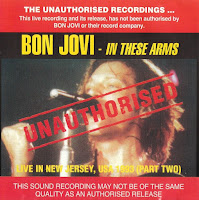 Bon Jovi is an American rock band from Sayreville, New Jersey. Formed in 1983, Bon Jovi consists of lead singer and namesake Jon Bon Jovi, pianist and keyboardist David Bryan, and drummer Tico Torres. The band's lineup has remained mostly static during its history, with the only exceptions being the 1994 dismissal of bass player Alec John Such, who was unofficially replaced by Hugh McDonald, and the departure of long time guitarist and co-songwriter Richie Sambora in 2013. In 1986, Bon Jovi achieved widespread global recognition with their third album, Slippery When Wet. The band's fourth album, New Jersey was equally successful in 1988. After touring and recording non-stop during the late 1980s, the band went on hiatus following the New Jersey Tour in 1990, during which time Jon Bon Jovi and Richie Sambora both released successful solo albums. In 1992, the band returned with the album '[Keep the Faith'.
. 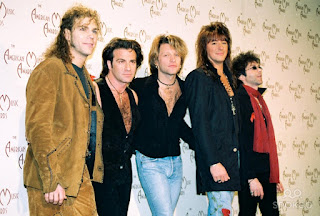 Their 'I'll Sleep When I'm Dead' Tour ran during the second half of 1993 and it is from this tour that the featured bootleg recording was taken.. (Note: The front cover says "Live in New Jersey, USA 1993" but the track listing is the same as the second half of their set list for the concerts at Milton Keynes National Bowl, England, UK on Sept 18/19 1993, as reported by bootlegzone.com).
The tour was an extension of the 'Keep the Faith Tour' which was in promotion of the 1992 multi-platinum album 'Keep the Faith'. The tour returned to Europe, Asia and North America and also visited countries such as Australia and Argentina, which were not visited during the initial Keep the Faith tour earlier in the year.
.
Concert Review
(Bon Jovi at Milton Keynes Bowl - September 18th 1993)
Support Acts: Billy Idol / Little Angels / Manic Street Preachers

Another excellent concert from Bon Jovi on their I'll Sleep When I'm Dead Tour in support of their Keep The Faith album. Recorded live for Radio 1 in the UK hence this is a great bootleg of the gig. As is normal with Bon Jovi set lists change regularly and on the second night an extra 4 song encore was played...as recorded on this bootleg. Bon Jovi are so consistent live that I can honestly say that I have never seen a bad show. Old time pros in 1993 after being together a decade and coming through the aftermath of the Slippery / Jersey mammoth success 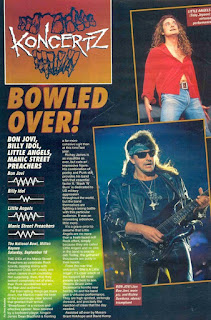 The Manic Street Preachers opened the day and as big a fan as I am of theirs today wasn't their crowd and they were unfortunately largely ignored. As mentioned elsewhere I was and still am a big fan of The Little Angels who were one of the support bands and were as usual fabulous. Not so impressed with Billy idol who for every great song (Rebel Yell, White Wedding, Mony Mony etc) there were twice as many duds. When he really rocks then he is capable of great things but too much dross in there as well.
Review sourced from storiesfromthemoshpit.com 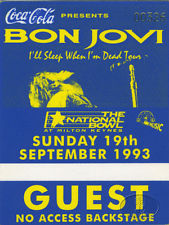 I'd Die for You
Dry County
Lay Your Hands on Me
I'll Sleep When I'm Dead
Play Video
Bad Medicine
Shout
(The Isley Brothers cover)
Help!
(The Beatles cover)
Wanted Dead or Alive
In These Arms
Livin' on a Prayer
I'll Be There for You
With a Little Help From My Friends

Feature Article
'Jon Bon Jovi says he hasn’t spoken to former bandmate Richie Sambora in ‘Over Three Years’
Bon Jovi is one of those bands that many of us find to be a guilty pleasure, much like Journey. Their music is cheesy, goofy, a bit over-dramatic, and sounds incredibly dated, yet remains iconic and will undoubtedly live on through classic rock radio and Spotify playlists into the future. Throughout rock history, there have been iconic pairings of lead singers with guitar players that have gone on to help define these bands. Guns N’ Roses has Slash and Axl, Aerosmith has Steven Tyler and Joe Perry, The Rolling Stones have Mick Jagger and Keith Richards, and Led Zeppelin had Jimmy Page and Robert Plant. Much in the same vein, Bon Jovi had Jon Bon Jovi and Richie Sambora.

According to Billboard, Bon Jovi are preparing their first post - Richie Sambora album to be release later this year. The reasons for Sambora’s departure in 2013 still aren’t even entirely clear, with Sambora making statements in the past about how tough life on the road was for him, but Jon Bon Jovi claims he hasn't even spoken with Sambora since then. He just stopped showing up.

“I haven’t seen him in over three years. He just didn't show up for work anymore. And that’s the truth of the matter,” Bon Jovi said. “And, you know, life goes on.”
No doubt Bon Jovi will still see success in a post-Sambora world, but the legendary pairing is going to be what fans will clamour for. Oh well, there can be a big reunion tour somewhere down the line if these two can somehow meet in the middle. Then they’ll be… halfway there. Until then, fans will be livin’ on a prayer in hopes of the two making up. Have hope, though; if Axl Rose and Slash could reconcile, that means that anything — literally anything — is possible. [as reported on uproxx.com By: Dave Walsh 05.11.16]
.

This post consists of MP3's (320kps) ripped from my Australian Grapefruit Bootleg CD. The quality of the recording is close to a 10/10 and is one of the best bootlegs I've heard in the Unauthorised Series.
Full album artwork along with alternative bootleg covers released for this Radio Broadcast are included. Other titles for this concert are "Long Way Home", "I'll Sleep When I'm Dead" and "Live At Milton Keynes". The first half of the concert was released by Grapefruit under the title Bed Of Roses, which unfortunately I don't own - but I'm still looking !
Hope you enjoy this Boot which features great audience participation and Bon Jovi firing on all cylinders.
.
Track Listing
01 - I'll Sleep When I'm Dead [w/ Jumpin' Jack Flash] (08:23)
02 - Bad Medicine [w/ Shout] (10:55)