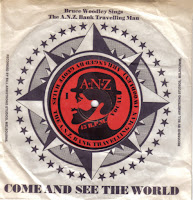 Bruce William Woodley, AO, is an Australian singer-songwriter and musician. He was a founding member of the successful pop-folk group the Seekers. The Seekers first disbanded in 1968, and Bruce Woodley consequently chose to pursue a solo career.

Bruce's first solo venture was a production company called Pennywheel, which saw him release a number of products for children, including a "Build an Alphabet" set of blocks and the 1969 EP and board book, "Friday St. Fantasy". In 1969 Bruce headed off to America to sell the songs he'd been writing, and was to remain there for several years. During this period he collaborated with a number of writers including John Farrar and Australian folk singer Hans Poulsen. Their composition "Boom-Sha-La-La-Lo" became a hit for Poulsen.

In 1971, Bruce released his first solo album, entitled Just Good Friends. In a reaction to the folk stereotype of the Seekers, the original album cover featured two naked models having sex. This was deemed too raunchy for Australia and the cover was replaced by a photo of Woodley. The original cover, however, was allowed in New Zealand, and this version of the album is a collectors item today.

Bruce also released a solo single around the same time that was called "The ANZ Bank Travelling Man". This single was a promotional advertisement and was given out free to employees of that institution as part of the promotion in 1971. Another interesting fact about this song is that Fredd Bear's Breakfast-A-Go-Go show (which aired on ATV Channel 0 and is now ATV-10) aired Bruce Woodley to promote the single (see YouTube Clip) and Fredd Bear did a comedy dance routine to the instrumental B side (see YouTube Clip). This is believed to be the only performance by former Seekers member Bruce Woodley of his advertising jingle for 'The ANZ Bank Travelling Man."

Three years later, Bruce contributed to an Australian-themed album put out by Viscount cigarettes, called The Roaring Days Vol. 1. A second volume never eventuated. He also had a hit song called "Love Me Tonight Baby". The album featured Bruce performing the traditional folk song "Eumerella Shore" and some of his own compositions, including "The Bush Girl", which he would later re-record for a double album in 1987, with the Seekers in 1997 and 2000, and with daughter Claire Woodley in 2001.

The year 1987 saw Bruce involved in the preparations for the Australian Bicentenary, and the release of an Australian-themed double album, songbook and cassette tape, featuring covers of traditional songs and some of Bruce's own compositions. The set was called "I Am Australian", after a jingle that he wrote to tie together the various threads of the project, tapping into the need he perceived for a national song in which people could take pride. One of his colleagues on the project was Dobe Newton of The Bushwackers, who helped compose the words of the title song; another was noted folk singer Rose Bygrave. The recordings also featured a children's choir including Claire Woodley. [extract from america.pink]

Here's the hyper-rare clip from Melbourne's legendary children's TV show "Fredd Bear's Breakfast-A-Go-Go". One of two known pieces of surviving original footage of the program, it features former Seeker Bruce Woodley being interviewed by Colin McEwan, and performing his ANZ bank jingle, in what appears suspiciously like some sort of cross-promotional deal between the show and ANZ...

.
So, this month's WOCK On Vinyl is a super rare and Obscure single from the early 70's which deserved greater exposure to the wider public. This is a great track and worthy of a place in the WOCK on Vinyl hall of fame.  This post consists of FLACs ripped from my pristine condition 45, found at my local flee market in amongst a pile of less interesting 45's. Also included are label scans for both sides of the single.
.
The A.N.Z Bank Travelling Man (32Mb)  New Link/Host 9/01/2019
.
Posted by AussieRock at 10:22 PM