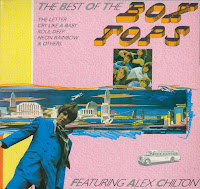 In September 1967, one of the most played records on radio was a hot little item by a new band called the Box Tops, the song was "The Letter" and for many who heard it the story starts and finishes there, a mere footnote to musical history. In truth the Box Tops were more than just another one-hit wonder and their story is entwined in the larger history of Southern Soul & Rock music in general.

Memphis, Tennessee had long been one of the hubs of Southern music, the dance hall string bands of the 19th Century gave birth to the first jug bands and from the 1920's recording of ethnic music from Memphis and the surrounding areas became commonplace, Memphis being a natural catchment centre for the South, situated in the middle of a spider's web of highways and rail roads. Most of these recordings were made by Northern record companies on field trips, and even as late as 1950 when Sam Phillips formed the Memphis Recording Service, which in 1952 evolved into Sun Records, his main aim was to record the Southern blues men and the emergent style of Black Rhythm & Blues. When Sun released Elvis Presley's first record in July 1954 they inevitably provided the Southern white musicians with the same opportunity to record in Memphis as they had earlier done with black musicians. With such a musical culture, Memphis in the mid 1960's must have seemed an ideal place to launch a new label. 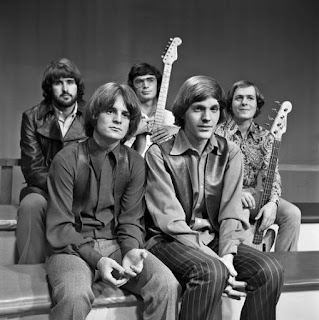 Chips Moman & Tommy Cogbill had been guitarist and bassist respectively for the session band at Fame studios in Muscle Shoals. With the aid of a $5,000 loan from Atlantic producer Jerry Wexler, they moved to Memphis and started American Group Productions (AGP). AGP were able to enlist the talents of Spooner Oldham, the keyboard player in that same Fame session band, and Dan Penn, who with The Pallbearers had formed the studio band that preceded them at Fame. Dan Penn had been writing hit songs since the age of 14 when he scored with a hit for Conway Twitty, "Is A Bluebird Blue"?

Almost immediately after its inception AGP had a monster no. 1 hit with "The Letter" featuring the vocal talents of the 16-year-old Alex Chilton, whose vocal delivery belied his tender years.
Chilton had grown up in Memphis and had almost joined a local high school band featuring his friends (and later Big Star members) Chris Bell and Richard Rosebrough. Instead he joined another local outfit (whose Stax flavoured soul music was more to his taste) called Ronnie and the DeVilles. By 1967, they had transmogrified into the Box Tops, by which time the line up was Chilton, Gary Talley (guitar), John Evans (organ), Danny Smythe (drums) and Bill Cunningham (bass, and brother of B.B. Cunningham of The Hombres, who had a 1967 hit "Let It Out").

Jerry Wexler was understandably miffed when he was not offered a deal on 'The Letter for Atlantic, the song being distributed by Bell Records instead. This upset, however, did not prevent him from using the services of AGP for Dusty Springfield's 'Dusty In Memphis' LP.
"The Letter" was followed by a second single, "Neon Rainbow" and the first Box Tops album — The Letter/Neon Rainbow. Despite the reasonably true liner notes claim that the band were not a thrown together, overnight type group, they've been entertaining in the Memphis area for about two years . . . the LP had all the hallmarks of a hastily produced package to capitalise on a big hit, the rear cover photo showing Alex Chilton as the only member not in the apparent band uniform of tie, blazer and plaid trousers, reminding one of the 1950's comedian who joked that Marvin Rainwater had become famous so fast, they didn't have time to change his name. 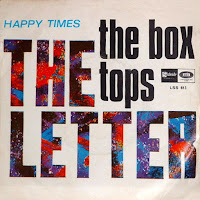 Amid the collection of predictable cover versions and album fillers was "I Pray For Rain", one of 4 Penn/Oldham songs on the album, complete with studio thunderstorm, it showed that the young Alex Chilton had more than one voice and was capable of competing with the best in a musical field now being referred to as "Blue Eyed Soul". In his book Say It One Time For The Broken Hearted Barney Hoskins suggests that Dan Penn had little to do with the group and as producer his only contact with Chilton was to comment on his diction. This may be so, but in recent years Chilton has spoken of Penn with some respect, especially when introducing one of Penn's lesser known songs that he now performs, "Nobody's Fool".

The next single was their second biggest seller, making no. 2 in the US. The single boasted another two Penn/Oldham compositions, the A side "Cry Like A Baby" and the flip an unexpected gem "The Door You Closed To Me". It should really come as no surprise that a bunch of Southern white boys could produce such a soulful sound - Moman/Penn had composed "Do Right Woman, Do Right Man", and Oldham/Penn had composed "Dark End Of The Street", songs which worked equally well for Aretha Franklin and James Carr as they later did for the decidedly white Flying Burrito Brothers. As Jim Dickinson of the Dixie Flyers pointed out, the Stax rhythm section was 50% white and 50% black. Southern soul music, it seemed, had no racial discrimination, the real irony being perhaps that at the same time in the North, Motown with an almost exclusively black staff, were producing what would eventually become soul records for a middle class white clientèle. 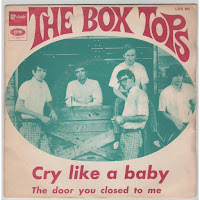 The second Box Tops LP 'Cry Like A Baby' was much stronger than the first, with another 5 Penn/Oldham songs including the title song, "Fields Of Clover" and "727", also the atmospheric "Deep In Kentucky" and a version of "You Keep Me Hanging On" which would not have been out of place in a Quicksilver Messenger Service set. The producers obviously had decided to explore every avenue in an attempt to exploit the full potential of the Box Tops. The liner notes by Paul Revere and The Raiders' Mark Lindsay gives mention to Alex Chilton thereby establishing him as the only band member to have individual recognition.

The 3rd LP 'Non Stop' only had 2 Penn/Oldham songs and had an altogether different feel. Eddie Hinton and Donnie Fritts' "Choo Choo Train" was released as a single coupled with "Fields Of Clover". The folk rocker "Yesterday Where's My Mind", a sub Hey Joe song, has Chilton trying out his best Tim Rose vocal and sounding surprisingly like late period Elvis Presley, who by this time was also using the services of AGP. For the first time one of Chilton's own compositions "I Can Dig It" was used. The liner notes had photos and potted biographies for the first time.
By now the line up had changed, Evans and Smythe had gone, replaced by Rick Alien (from the Gentrys) and Tom Boggs (from Flash and the Board of Directors). It does seem, however, that studio musicians were used on the majority of the Box Tops recordings, in fact Chilton was frequently the only band member to actually record.

The 4th and final Box Tops LP 'Dimensions' shows the band looking more in tune with what was happening elsewhere, out were the matching suites, in were open neck shirts and long hair. Gone also were the Penn/Oldham songs, perhaps they had finally lost interest. The first track on the LP provided the band with their 3rd and final Top 20 US hit, charting on 30.8.69 and reaching no. 8. A whole generation can be forgiven for thinking that Bruce Springsteen wrote "Soul Deep", in fact it was written by the same man who had penned "The Letter" and "Neon Rainbow", Wayne Carson Thompson.

The next track was the obligatory Dylan song, "I Shall Be Released" and listening to it one can only wonder why Elvis Presley was never tempted to record his own version. "Sweet Cream Ladies" provided another single, unfortunately not a big hit — perhaps a song extolling the virtues of whoredom had no place in the collections of 1969's pop fans.
The remaining 3 songs are all Chilton compositions and show the fledgling songwriter trying his wings, from the soulful "Together" through the fairly average blues of "I Must Be The Devil" to the delightful "(The) Happy Song", a sing-along with "I Can Dig It" - that in late 1969/early 1970 he would re-record at Ardent studios for a still unreleased solo album. 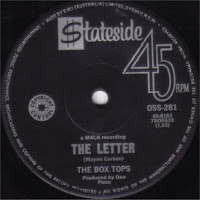 Alex Chilton left the Box Tops in 1969, according to an interview in the magazine Bucket Full of Brains no. 14, he had only stayed in the group to avoid school. The succession of session men proved bad for his morale so he left for New York, returning to Memphis in 1971.
On his return he joined some fellow Memphians in one of the truly legendary groups - Big Star. Although their records did not shift mega-units they proved to be one of the most influential bands of the 1970's. The 3rd Big Star LP found Chilton in collaboration with Jim Dickinson of the Dixie Flyers, and formerly of the Jesters, one of the last bands to record for Sun, thereby strengthening the links with the past and laying a foundation for the future, Chilton himself becoming an influence on bands such as the Cramps, The Dbs, Panther Burns and the Replacements, who in 1987 even recorded a song called "Alex Chilton".

Alex Chilton now concentrates on his solo career and is recording prolifically. He plays regularly and has developed into something of a repository for popular music, on a good night he will serve up a selection of his own songs and anything from Slim Harpo's "Tee Ni Nee Ni Noo" to the gavotte from Bach's 1st orchestral suite! Oh yes, if he's in the mood he will also offer pretty neat versions of "Soul Deep" and the song which in 1985 he described as "my eternal Nemesis in life", a comment surely made with tongue in cheek as that song is the one that gave him his start - "The Letter". [ Album Liner Notes by Dave Morosoli]

On March 17, 2010, lead vocalist Alex Chilton died of a heart attack. Box Tops Bill Cunningham and Gary Talley teamed with early friend/producer Terry Manning to perform a tribute to Chilton as The Box Tops at The City Winery in New York City on July 28, 2010.
.
This post consists of MP3's (320kps) ripped from my European vinyl pressing and includes full album artwork. This is a great compilation of Box Top hits but is by no means a full discography of their musical legacy. Even though there are plenty of other 'best of' compilations available on CD for this band, nothing beats the crispy sound of freshly rip vinyl. Also included as a bonus track is the non album B-Side of The Letter called "Happy Times"
. 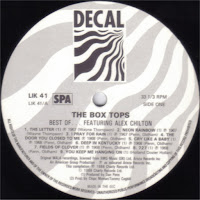 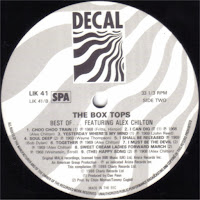