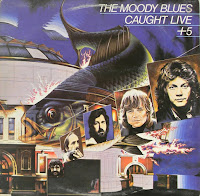 The Moody Blues released this live concert recording (augmented by some previously unissued studio cuts) after they'd decided to re-form at the end of the 1970s, in order to get some product out and test the waters for their reunion the following year. As their first new release in five years, it sold extremely well on both sides of the Atlantic and fuelled the anticipation attending the release of the Octave album a year later.

In point of fact, however, the group supposedly never liked the concert much as a document, which is one reason why they didn't authorize its release on CD until 1996 -- the unofficial word among fans is that several of the group members were under the influence of controlled substances during the show and were, thus, less sharp than they might otherwise have been, though you'd never know it from the results here. 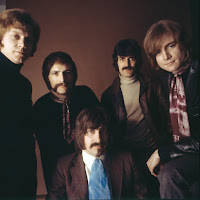 The 1969 Royal Albert Hall show sounds a lot better on this CD than it did on the LP version, with a closeness that was never evident before -- Justin Hayward's guitar and Mike Pinder's various Mellotrons, in particular, sound really crisp, and all of the singing comes out with more detail as well.

Their repertory at this time came primarily from Days of Future Passed, In Search of the Lost Chord, and On the Threshold of a Dream, plus "Gypsy," the one number from To Our Children's Children's Children -- their then new album -- that they actually performed live; the latter is also the opening number, and Hayward's guitar work is most impressive, whether he's playing the melody in the opening, or crunching out chords on the break. 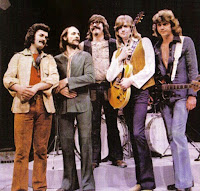 "The Sunset," from Days of Future Passed, is a showcase for Pinder's Mellotrons, the keyboard player slowly weaving lush Arabesques and misteriosos while Hayward strums out muted chords, Graeme Edge's drums impersonate the sound of a tabla, and Ray Thomas' flute hovers above it all with its lilting phrases. "Dr. Livingston, I Presume" lightens the tone with a more witty, whimsical side of psychedelia that still allows Pinder a chance to show off the Mellotron's range and Hayward a surprisingly hard-rocking solo -- one audience member, in particular, seems taken with it all, punctuating the crescendos with shrieks of appreciation that don't detract a bit from the listening.

Edge's nimble playing is most impressive on "Peak Hour," a frenetically paced number off of Days of Future Passed, and the other highlights of the set include the hits "Tuesday Afternoon" and "Nights in White Satin," and the closing suite from On the Threshold of a Dream, which works well despite Pinder's being limited to just two keyboards -- one scarcely misses the grand piano, and the opening sequence, "Are You Sitting Comfortably," gives Thomas' flute its best showcase. 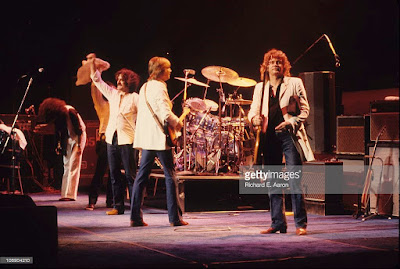 The group is tight throughout, both in their playing and singing, and the show ends on a hard-rocking note with "Legend of a Mind" and "Ride My See-Saw" -- and the former is a great vehicle for John Lodge's bass work.

The CD release (now out of print) reveals details in the playing (particularly on the guitar parts) that were obscured on the original LP, and while there are still occasional balance problems, as a representative set for the band from their psychedelic period, the concert portion of this CD holds up extremely well -- one only wishes that the band had seen fit to record a show or two from the following tour, where they rocked out on numbers like "Tortoise and the Hair," or their 1972-1973 tour behind the Seventh Sojourn album, representing their peak from this era in their history. 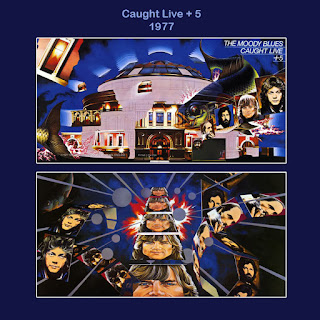 As for the studio cuts, they're salvaged from failed album sessions in 1967 and 1968, and they're not bad songs --- in fact they're pretty damn good-- "Gimme a Little Something" has a great opening verse, guitar part, and chorus, even if it doesn't quite hold together perfectly as a song, and "King and Queen" and "What Am I Doing Here" both have hauntingly beautiful melodies. But they're also not quite up to the standard of what the group released during that period, and work best in a historical, archival context, which is how they were issued. 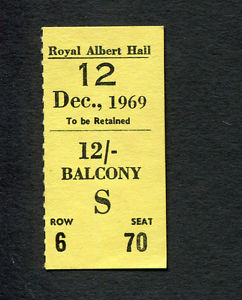 The "Plus 5" is my favorite part of this double album.
"Long Summer Days" being a favorite "summer" song... And, when I did listen to the live part -- the countdown intro to "Ride My See-Saw"   (L. O. V. E) is one of the best parts of the "live" part of the album.
The studio out-takes are fantastic. Especially the last three. "What Am I Doin' Here" is a powerful anti-Vietnam war song. I wonder if they had a fight on their hands with the label on this one?
Definitely a must for a collector, just for the 4th side of unreleased studio tracks.
(Review by Bruce Eder, All Music Guide)
.
This post consists of MP3's (320kps) ripped from my pristine vinyl copy and features full album artwork and label scans. Although this live album doesn't really give justice to the Moody's brilliance when recording in the studio, it does give us a glimpse of what they were like on stage in the early part of their career.  As Bruce Eder indicates, the fourth side (all new studio tracks) is the highlight of this release and should not be overlooked.  DECCA certainly had their marketing hat on when they decided to release this double album (and fits nicely on a single CD for good measure)
. 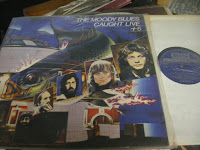 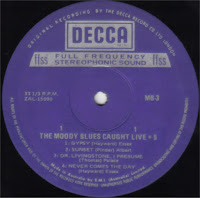 The Moody Blues were: 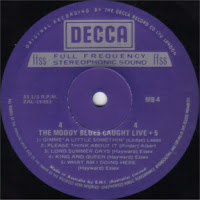 Posted by AussieRock at 8:34 PM