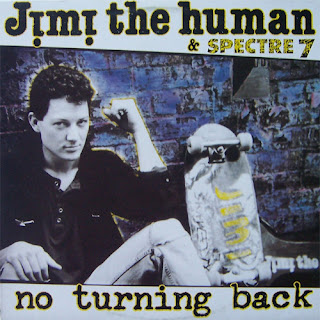 Jimi Hocking (born 7 June 1963) otherwise known as Jimi the Human is an Australian musician. He has been a member of hard rock groups, The Angels(1988) and The Screaming Jets (1994–97, 2010–present). As a solo artist he has fronted various backing bands playing hard rock, electric and acoustic blues by providing lead guitar, vocals, mandolin and keyboards.

But more so, Jimi Hocking is a songwriter, singer and guitarist of the highest calibre, the electric love child of T-Bone Walker, BB King and Jimi Hendrix. He struts the stage with his band, playing his ‘showy’ guitar style while pulling all the classic stunts ... behind the head ... the duck walk ... even the splits!

Jimi is in his element live on stage, whether it be a small cafe or a massive festival. His combination of banter and story-telling, wailing guitar and mandolin with superb songwriting and performance makes Jimi one of the 'must-see' acts in blues today. 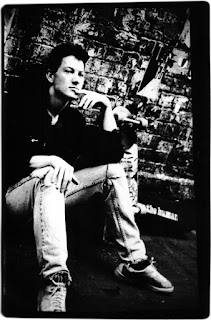 Jimi’s affinity with the guitar started as a boy when his father, Kevin Hocking (a well known pianist and composer) realised that Jimi was more interested in Chuck Berry than his piano lessons, and so presented him with a primitive acoustic guitar for Christmas. These humble beginnings led to an ongoing career in music, with Jimi playing electric guitar, acoustic guitar and mandolin.

The mid-1980's was when Jimi cut his teeth, playing hundreds of pub shows fronting bands like The Astroboys and The Astros. In the late-1980’s and early-1990’s Jimi had his own career as a hard rock artist. Known as Jimi the Human he released two recordings ... the Top 20 live album 'No Turning Back' and 'Living in Luxury' in 1993.

The combination of high speed picking and blues bends on these albums left an indelible impression on many guitarists ... including Joe Satriani, Edgar Winter and George Thorogood, all with whom Jimi toured. In fact, when Jimi played a little guitar to blues legend BB King in 1989 (while he visited Australia with U2) BB exclaimed, “I’ve been watching you ... and you're good!”.

Even before the 'Jimi the Human' era, Jimi had a reputation as a gun guitarist, so when misfortune struck seminal Oz rockers The Angels in 1988 when Bob Spencer broke his arm, he was asked to join the band to perform guitar duties on their 'Live Line' concert tour ... which he did with only one rehearsal!

In the mid-1990's Jimi was hired as lead guitarist for the popular Australian rock band 'The Screaming Jets'. For four years Jimi toured with the band and played lead guitar, mandolin and keyboards on their 1995 Top 5 'Self-titled' album, as well as the follow up release 'World Gone Crazy', receiving two gold records for his efforts.

Even while with the Jets, Jimi was still writing and performing his own material, releasing his solo acoustic album 'Standard Bohemian' in 1998. In 1999, Jimi defied his critics and released his first blues album, ‘Blue Guitar’ … despite pressure to keep to the rock stage, Jimi insisted he would play the music that was close to his heart. The results speak for themselves, with ‘Blue Guitar’ selling as well today as it did when it was released, Jimi's switch from rock to blues has been vindicated many times over since then!

The acoustic album 'Based On Actual Events' was released in 2001, and Jimi also won his third 'CAV' best acoustic performer award. However, not content as a local icon, 2001 was also the year Jimi first headed to New York, for well-received gigs in Manhattan and New Jersey. He was also invited to sit in with artists at Bleecker Street's popular ‘Terra Blues’ club, demonstrating his flawless ability to improvise as well as perform his own material.

In 2002, Jimi was busy on the Australian festival circuit, but he also put his ‘Biscuit Boy’ studios through its paces. He recorded, played on and produced Dave Gleeson's (of The Screaming Jets fame) first solo album ‘Wanted Man’, while also chalking up a solo blues album. 'Give Jimi Some Love!’ features original songs, plus a couple of blues classics given Jimi's unique touch. 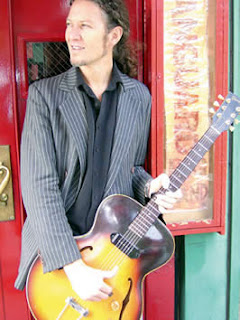 2003 and 2004 saw Jimi on the road, travelling many miles throughout Australia and the USA. He also released a compilation of his 'rock' days titled 'The Spectre 7 Years' - a whole bunch of re-recorded, re-mastered tracks plus some great live material from the era. Jimi also took out the coveted MBAS 'Blues Performer of the Year' for 2004.

Certainly 2005 was a remarkable year for Jimi. Crowned winner of the Solo/Duo section of the International Blues Challenge in Memphis, USA, Jimi subsequently embarked on a comprehensive US tour, appearing at festivals and clubs to great reviews. Meanwhile his blues albums were added to play lists in the USA, Europe and London.

2006 began with the release of ‘The Ultimate Bootleg (vs2)’. Jimi's 10th album was a re-make of his first independent acoustic album, featuring all new recordings of original songs and bonus tracks. 2006 also marked the 20th anniversary of Jimi's first indie release, 'The Astros' self-titled (and vinyl) EP, which still sounds so fresh, it's like you're in the same room as the band!
2007 saw Jimi release 'Blue Mandolin', his first album of mandolin-based tunes. Jimi's unique style of 'blues mando' made an instant impact on the local scene, with Jimi performing mandolin tunes in a number of guises: solo, trio, ensemble, even as a part of his electric blues shows! See the Video page for a clip of 'Skinny White Boy', a song considered by many to be Jimi's signature tune, and visit YouTube for heaps of live bootleg videos by fans. 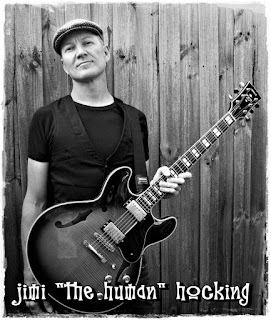 Mercury was in retrograde during 2008, which for Gemini's meant not much new was supposed to happen! Even so Jimi continued tracking his latest blues album, and spent the rest of the year on the road, with memorable appearances with his mandolin at the Port Fairy and Woodford Folk Festivals, to name but a couple. He was also named Producer of the Year for his work on 'Blue Mandolin' and best Male Blues Artist at the VicTas Blues Awards. A slow year indeed!

In 2009 Jimi finally settled on tracks for his long awaited 12th studio album 'Electric Mojo Machine', an album that saw Jimi fall in love all over again with his Les Paul Gold Top, the guitar it all started on. Somehow he managed to get it recorded (and re-recorded!), mixed and released by late in the year - all this while averaging a dozen live sets of blues a week! He also appeared at a swag of festivals including Woodford in QLD, Queenscliff in VIC and, a bit further from home, the Himalayan Blues Festival in Kathmandu! 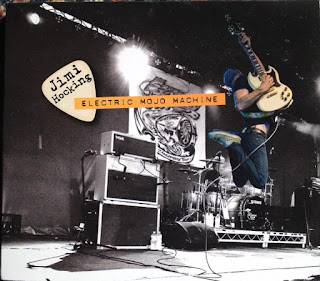 2010 and Jimi is on the road with his Blues Machine promoting the 'Mojo' album, and back with bandmates The Screaming Jets for some rockin' shows, including a tour support to Jimi's all time favourite rockers, Status Quo.

2011 is another year on the road for Jimi, visiting festivals all over Australia and taking his Blues Machine to India and Nepal. In January the band recorded a live show at the Nighthawk Blues Cafe and, with David Briggs at the helm, 'Live In The Moment' became Jimi's 15th record and his first live album in 20 years.

If all that ain't enough, Jimi has also written music for film and TV, and recorded and played for many other artists in a career now spanning 25 years. He continues to write, record and perform with astonishing enthusiasm ... but he wouldn't have it any other way, after all, "the blues is for life!"  [Extract from Jimi Hocking's Website]
. 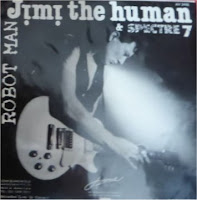 Considered by many to be my ultimate rock statement, 'No Turning Back' was recorded live to a full house at Melbourne's legendary Corner Hotel ... sweaty blues-based pub rock with head-turning solo's!!  If you like screaming Les Pauls through Marshalls cranked to 11, then this one is for you.
The band is really tight and they had a great groove and a raw edge.

This post consists of a MP3's (320kps) taken from the CD release (thanks to Tom at Midoztouch2 for the rip) and includes full album artwork for both CD and LP.
This album definitely has an Angels feel to it with a hint of punk thrown in (see their cover of the Sex Pistols "Holidays In The Sun"). Another great track is their cover of Quo's "Down Down". This relatively unknown release should not be dismissed - its damn good ! 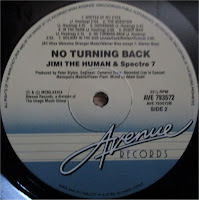 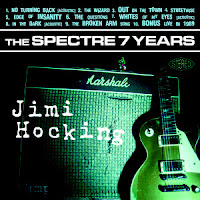