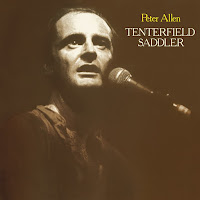 Peter Allen was born on Feb 10, 1942 in a little town in the hills of N.S.W. He learnt piano from an early age and was playing at the local pub by the time he was ten. Peter left school in his mid-teens and decided to further his career in Sydney. It was there that he met Chris Bell and they joined forces as the Allen Brothers.  After releasing several records and becoming TV regulars, they set out for the Orient where they met Judy Garland. Judy enticed the duo to the US where Peter met her daughter, Liza Minnelli. The couple subsequently became engaged late in 1964. They were married in 1967. However, the relationship became strained as Liza became a star and Peter's career seemed to stagnate.

Finally, in 1970, the couple broke up and so too did the Allen Brothers. From this point, Peter began to nurture his talent for song-writing. He moved to Greenwich Village where he gradually developed a cult for his bizarre stage antics in the small clubs in the area.
As his popularity in cabaret began to increase, Peter directed his songwriting talents to expatriate Australians, Olivia Newton-John and Helen Reddy. 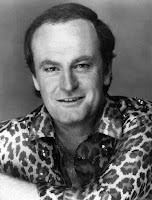 It was for Olivia that he wrote the dual Grammy Award winning song, "I Honestly Love You" in 1974. He returned to Australia in September 1975 as the opening act for Helen's show in Sydney.
Meanwhile, in the US, Peter was beginning to attract bigger audiences and had moved into bigger clubs. In 1976, Dee Anthony (Peter Frampton's manager), took over his affairs and things began to happen. Peter teamed up with composer, Carol Bayer Sager. He also recorded "I Go To Rio".
Although the single eventually topped the Australian charts, it was not until that amazing film clip of the song was shown on the pop show Countdown, that it received any airplay. By the time Peter arrived back in Australia in September 1977, the record had made number one and he was met with a tumultuous reception right throughout his tour. 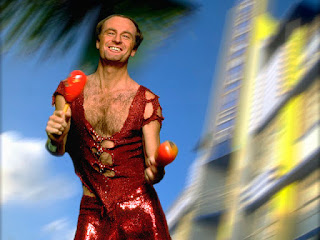 'Rio' was followed hotly by his best selling album, Taught By Experts, and another single, 'The More I See You'. The next release by Peter was a double live album recorded at clubs in both Los Angeles and New York, entitled 'It Is Time For Peter Allen', which hit the shops in October 1977. [extract from Noel McGrath's Australian Encyclopedia of Rock, Outback Press, 1978. p 12-13]

He was the only Australian to win an Oscar, a Grammy and a Golden Globe, and wrote some of our most iconic songs before dying in 1992 at 48-years-of-age. Born in Tenterfield, his song "Tenterfield Saddler" continues to be a classic song that thrust Tenterfield into the limelight after its release. The Tenterfield Saddlery was made famous by Peter Allen's tribute to his past, and grandfather George Woolnough in the 'Tenterfield Saddler'. 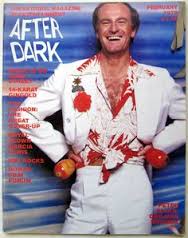 However it is much more than just a song. For 50 years (from 1908 - 1960), this quaint blue-granite saddlery on High Street was a key meeting place in town. Saddler George Woolnough plied his trade, listening, undisturbed by the chatter and opinions of those who wandered in. One famous customer was Banjo Patterson.

Since 1860, the building has been used as a bank, private residence, and saddlery. Classified by the National Trust and in original condition - the old ceilings wear 130 years of tobacco stains, wooden floors are patched in places with scraps of leather, and visitors can see the working conditions of 100 years ago first hand.
. 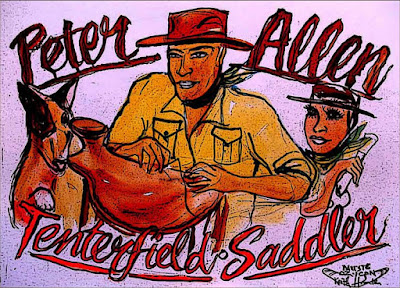 More than ninety years after those words about Tenterfield were written, the first man ever to dance with New York's famed Rockettes found himself once again in Atlantic City, New Jersey. This time he was crouched inside a giant champagne glass prop waiting for the orchestra down beat to start his dinner show. The solo performance awaiting him would doubtless be demanding, but the man himself was intrepid, the man was a tank. But it was also true that the 1980s for Peter Allen had started in triumph then ended in calamity, testing him personally to the limit. He had buried in the past few years more friends, colleagues and lovers than he likely had the heart to dwell on. He had also seen his dream of a Peter Allen Broadway musical soar into a fantasy of goodwill and imminent triumph, then splatter into the reality of scornful reviews and a sniping, vengeful press. The worm had turned and now the song and dance man's most valuable resource, his energy, was beginning to ebb. The uninvited visitor illness was quietly creeping up on him.


The performer nonetheless had his vast experience and pronounced native cunning to fall back on. Once Peter's show was humming along he would pad it out by talking and telling gags instead of singing. He would tell the audience the same story he had always told them, the story of his childhood, 'Out in the bush, chasing kangaroos, eating koala bears for lunch.' This was Peter Allen's image, his show-business insurance and it made simple commonsense to maintain it. 'Never interfere with the legend, never correct it,' his former mother-in-law Judy Garland had decreed, and the bush bou-levardier was not about to. Not that he expected to be genuinely understood, not in his racket. Truth was far too complex a matter for legend and Peter Allen had too many incongruous and opposing qualities to be understood; it was one of his strengths that this gregarious, guarded, self-contained man had never expected to be understood. So Peter Allen would joke his way around the Broadway flop and tell them about the folksy Australian town he came from, Tenterfield. 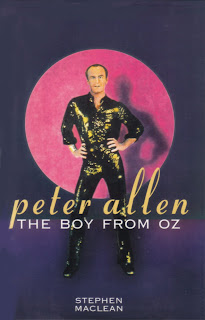 The fact that Peter had never actually stayed on in Tenterfield would not be mentioned because it would only confuse the issue. Peter Allen, real name Peter Woolnough, had in fact grown up in Armidale. But Armidale had been almost (but not quite) sophisticated for an Australian country town, and what was the value of that to legend? Best to talk about this little kid dancing in the never-never land of the Tenterfield bush, hoofing and tapping and queening it up while his grandfather made saddles; destiny's tot rejecting the family business because he 'didn't want to work in leather,' as he put it. As for the other town, Armidale, it just wasn't funny, and didn't sound right in a lyric. More to the point, though, Armidale was cursed by memory and blighted by personal ruin. So Peter Alien was the boy from Tenterfield and that was that for the purpose of myth. [extract from Peter Allen The Boy From Oz by Stephen Maclean, Ranmsom House Aust, 1996. p3-4]
.
This post consists of FLACs ripped from my trusty vinyl that has had a spin or two on my turntable - especially after watching the recent T.V mini series 'Not The Boy Next Door' and reading Stephen Maclean's biography 'The Boy From Oz'.  One can't help but be in awe of what Allen achieved as an Australian artist and how talented a musician 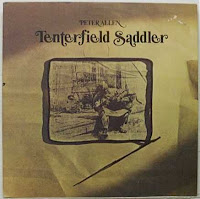 and songwriter he was. This album should not be missed and you'll not hear one pop or click in this recording. Full album artwork and label scans are included as usual. Note that this album was originally released in 1972 by Metromedia in Italy & US, catalog number KMD 1056 with a different cover (see right)
. 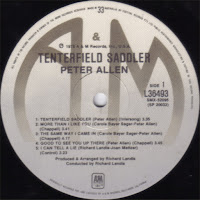