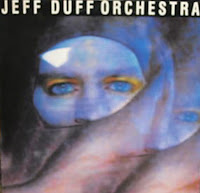 Think of Bowie channeling Sinatra, fronting Blood, Sweat & Tears (playing Chicago covers) and you might get an idea of what Jeff Duff is like (that quote from Aztec Music who has reissue Jeff’s band Kush first two albums on CD).
Born in 1950 this eccentric singer with his jazz – rock style band Kush released a great version of McArther Park. With the break up of Kush in 1975, Duff went solo and went to the U.K. The British accepted his style but he caused a stir with the mainstream media. In ’88 Duff returned to Oz to play Secta in the film “Sons Of Steel”. Later that year he formed the Jeff Duff Orchestra, an all girl group of classically trained musicians. In ’89 Jeff Duff Orchestra recorded “Walk On The Wild side” for the second time, this time on the Captain Vimto label where it became a hit. I think it’s very different than the original Lou Reed version… see what you think. [extract from Ozzie Musicman]
. 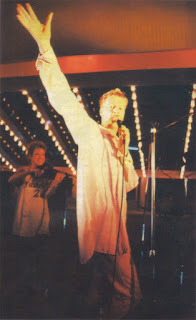 America born Jeff Duff (aka Duffo) possesses an excellent tenor voice which seems more suited to opera, but he has succeeded in recording in the rock medium. As lead singer of the Chicago / Blood, Sweat And Tears - influenced big band Kush (1971-77), Jeff secured plenty of attention with his antics and bizarre choice of costume. The band, limited by its size, could only work the large venues and cabarets, and despite the huge effort to maintain the band, managed to record two albums and have two Top 40 singles. Upon its demise, Jeff formed his own group and toured with a lively and varied show, which failed to relate to confused, conservative audiences. Jeff moved to the UK in 1978 where he recorded and performed as 'Duffo', releasing several albums, touring Europe and having sporadic chart success in Holland and Italy. He also recorded under the names Ivor Biggin and Jupiter Jones. It was somewhat surprising to see him return to Australia to indifferent audiences in 1988, when he performed as a jazz singer with his Jeff Duff Orchestra, an experimental outfit, and is the focus of this post.  His signature song remains Lou Reed’s "Walk On The Wild Side", which he has recorded at least three times. The Jeff Duff Orchestra album featured some reworking of older material, ‘Pilot’ and the excellent ‘Killing This Affair’. Jeff appeared as 'Secta' in the Australian science Fiction movie 'Sons of Steel', released in 1989, featuring Duff single, 'Here Come the Freaks', which is also included on the album featured here. [Extract from All Music.com]
. 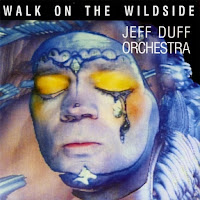 Jeff Duff returns with some classical insight
(Rolling Stone #431 May 1989 p22  by Samantha Trenoweth)
The former Kush singer returns from the wild side with an all-girl orchestra and a new approach to
the pop.
IT'S SIX O'CLOCK ON A Friday evening in the middle of Kings Cross. A tall, thin man, dressed in white on white, is standing by an iron grille, waving. Jeff Duff has decided to meet me on die pavement because the doorbell to his bedsit doesn't work. A woman walks past in the highest shoes imaginable, the brightest of lipsticks and the shortest of skirts. "I used to look just like that," quips Duff recalling his Seventies past.
Back in the early Seventies Duff sang with a jazz rock band from Melbourne called Kush and began to indulge his cabaret fantasies that had more than a touch of camp. Kush recorded two albums; 'Snow White and the Eight Straights' and 'Nah, Tellus Wh't Kush Means, Yer Great Sausage'. Duff was not unfamiliar with wearing lingerie or bananas on his head.
These days Jeff Duff looks, you might almost say, elegant. What's more, he looks pretty well unmistakably male. Upstairs, in the tiniest of rooms he offers pumpkin seeds, a copy of the Jeff Duff Orchestra's live album and a single rose. Not, one suspects, in the spirit of payola but rather because he likes roses and likes making friends. Mr Duff calls forth all sorts of Victorian expressions like "delightful", "charming" - and he is all of these things and also talented.
"Do you like my view?" he enquirers, throwing open a window to reveal a huge exhaust fan and a brick wall. "It's hot very pleasant but it's typical of the rock & roll lifestyle. Bob Dylan probably had the equivalent in Greenwich Village... and I tend to be a bit more productive and creative when I'm living in squalor." 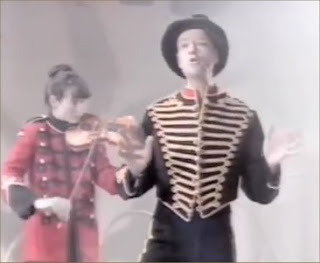 Jeff left Australia in 1978 after the break-up of Kush, spent ten years in Europe, changed his name to Duffo and made some interesting records which sold quite respectably. In the two years since his return to Australia he has had some chart success with a version of Lou Reed's "Walk On The Wild Side" and assembled the Jeff Duff Orchestra with a line-up that is, aside from Duff himself and the drummer, all women.
"We're combining a bit of the pop culture with some classical insight" he explains. "We've had a battle with venues. They sort of flip out. After they've seen us it's okay but our agent has trouble' convincing them that there's this girl orchestra with a singer and they have violins and no guitars.
. 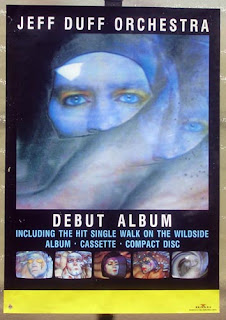 "Also we have this tendency to write songs which are very melodic. You know, they're not four-on-the-floor so people can dance their butts off. Still, it's interesting seeing the way people approach our music on the dance floor. A lot of them end up embracing one another, whether they be male and male, female and female or whatever... which is a good thing, I guess, instead of banging their heads against the wall. Once people get to see us they do seem to like it. It's not that 'we're trying to be different, it's just the way we are."
Jeff Duff still takes his music very seriously — and his ambition to be one of the world's great singers. Similarly his writing which revolves around a fascinating blend of the mundane, the tragic, the fantastic and the absurd. The current crop of songs on the Orchestra's debut,show a new depth to his dry humour.
"You've got to get the sexual scandal connotations into the article," he adds finally with a smile, ever the showman. "Now, who did I sleep with last night? No, it was just me and the teddys on the pillow."
.
This post consists of MP3's (320kps) ripped from vinyl and includes full album artwork for CD.  If you followed Jeff while he was fronting Kush, then you'll appreciate how he has taken his musical style to a new level on this album. His reworks of "Macarthur Park" and "Walk On The Wild Side" demonstrate his musical prowess, as do all the tracks on this album. I have also chosen to include as a bonus track, a recording of "Stairway To Heaven" which he made on the ABC show "The Money or the Gun" back in 1990. This album should not to be missed. 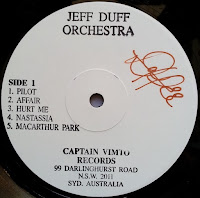 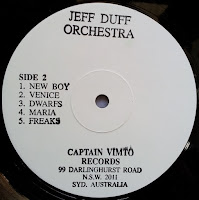