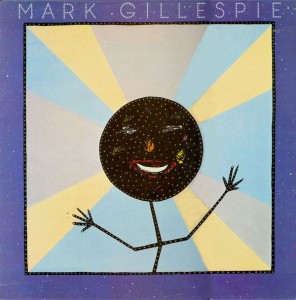 If you've never heard of Mark Gillespie, you owe it to yourself to hunt down an album of his and experience what contemporary musical genius is all about.

Melbournites may best remember Mark Gillespie as the singer/songwriter/guitarist who enjoyed a cult following in the Victorian capital throughout the late 1970's. It was his emotive roots-rock style, incorporating soul, rhythm and blues, funk, and a dash of reggae that endeared him to fans of the Melbourne scene at the time.

Gillespie's first recordings appeared on a various artist's compilation called 'The Debutantes', released by the Oz label. The compilation featured two of his tracks, 'I'm A Kite (Won't You Be My Hurricane)' and 'The Joke's On You'. Around the same time Gillespie published a collection of prose and poetry through the small publishing company Outback Press.

In 1978 Mark Gillespie and the Victims released 'Savanorola', his first single. The Victims included Mick 'The Reverend' O'Connor on keyboards, Peter Reed on drums, and Bruno DeStanisio on bass.

Gillespie's big break was just around the corner. He signed to the Festival label and released the single 'Coming Back For More' in 1979. It was this release and his new label that scored Mark support slots for Tom Waits, Rodriguez and Maria Muldaur on their respective national tours of Australia. Gillespie and his touring band, Broderick Smith, Stephen Cooney, Clive Harrison, Trevor Courtney, Stewart Watson, and Pat and Gay L'Nane showed the rest of the nation the heart-felt performances Melbourne fans had been enjoying for the past few years. 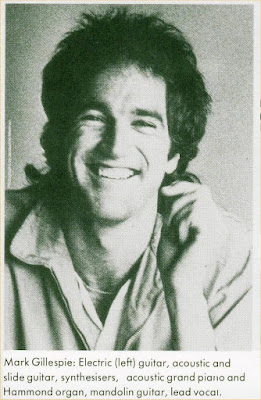 The stage was set and Mark Gillespie, now signed to EMI, went into the studio with Joe Creighton, Mark Meyer, Ross Hannaford, Rex Bullen, Lisa Bade and a swag of other guest artists (some of whom went on to enjoy national stardom) to record his debut long player 'Only Human'. Four singles and countless performances to his expanding appreciative audience, Gillespie needed a break.

He traveled throughout Asia for a year or so before heading back to record the follow-up to 'Only Human'. In 1982 his second album 'Sweet Nothing' was released on the Glenn Wheatley's label through EMI. The album featured friends from his debut, Ross Hannaford, Mark Meyer and Lisa Bade, with the addition of saxophonist Andrew Thompson, bassist Tim Partridge, and Gary Lyon (not the ex-AFL player) and Nikki Nicholls on backing vocals.

The album produced three singles, 'Nothing Special', 'Traveller in the Night', and 'Night and Day'. On the Melbourne charts Gillespie's second album reached Number 9, but more importantly, it peaked at Number 32 on the national charts, the first time a Mark Gillespie release had featured in the national Top 40. Fans and critics alike lauded his releases and Gillespie was fast becoming recognised as Australia's premier songwriter. He followed up the success of 'Sweet Nothing' with his third album, a self-titled effort in 1983 that soon became more widely known as 'Ring of Truth' after the lead single. 'You' and 'Letting Go' were the other singles from the album that featured ex-Bee Gees and Groove drummer, Geoff Bridgeford and vocalist Renee Geyer. 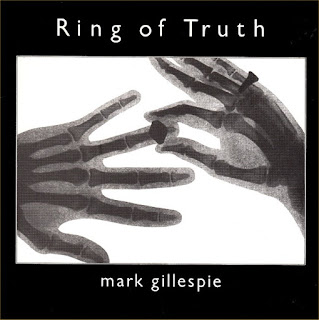 Mark Gillespie, for whatever reason, had had enough. He returned to Asia where he set up an orphanage in Bangladesh, a gesture that was indicative of the heart and soul of Mark Gillespie. In the mean time Glenn Wheatley and EMI made the most of their signing when they released 'Best of Mark Gillespie (Small Mercies)' in 1985. It appeared Gillespie's contribution to Australian music was done when nothing was heard from him until 1992 when he returned to Australia to record and release 'Flame' in 1992 Gudinski's Mushroom label tied up with Festival, the label who had given Gillespie his first big break 13 years earlier. At this time he also released the CD single 'Long Time' and EP 'Don't Wait'. Old friends and musicians who'd long admired Gillespie's work gathered to record these comeback efforts. The artists involved included Joe Creighton and Ross Hannaford, along with ex-Mondo Rock keys man James Black, John Farnham band drummer Angus Burchill, ex-Aussie Crawl and Kevin Borich Express drummer John Watson, former Stephen Cummings Band guitarist Shane O'Mara, and Deborah Conway Band bassist Bill McDonald, among others.

But, so far, that's all she wrote as far as Mark Gillespie's contribution to Australian music is concerned. Since '92 Gillespie has had no further involvement. According to another Australian music legend, Broderick Smith, Mark is happy living with his wife north of Benalla in Victoria. Brod told us this week that Mark is "staying away from the scene and enjoys spending more time with farm animals than people".

Mark Gillespie's story truly is a humbling one for all us musicians. He seems to be a man who cares more about humanity, happiness, and music for music's sake than swimming through the sharks to "make it" in the business of music [sourced from a song facts forum]
.
Joe Creighton (ex-band member) recalls:

Around 1978 I met Mark Gillespie, singer songwriter, the man in black!
Mark came across as a tortured soul and with an air of mystery around him; he was fast gaining a solid reputation for himself as a songwriter/poet and developing a good fan base in the live pub circuit. 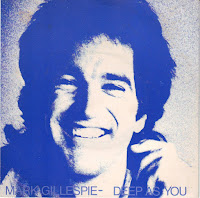 He came to my flat one day and asked me if I would play bass for him. He was also trying to recruit Hannaford. I was confused that another artist would want me to play the bass for them as I had a picture of myself as a singer/songwriter who happened to play the bass and not as 'BASS PLAYER'. I said to him 'Why don't you get a real bass player'. He said 'I want your bass playing in my band'. I said 'OK' and little did I realise that I had made a fairly serious career decision. I became a 'hired gun' for the first time.

I did Mark's first album 'Only Human' up at The Music Farm in Coorabell, near Mullumbimby, in 1980. That album gave me much kudos as a musician. Mark's songs were always great for creating good grooves and dynamic bass lines in. I always had a lot of fun recording with him. I was able to have quite a bit creative input in his music; I played bass, sung backing vocals and helped with the arrangements. 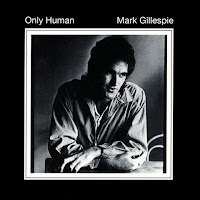 When that album came out my phone didn't stop ringing everybody seemed to want me on their albums. It was an exciting time as it was rewarding but it did distract me a bit from my fundamental purpose as a singer/songwriter. I did however learn a great deal from all those artists I worked with.
Zev Eizik who, with Michael Coppel, promoted a lot of overseas artists in Australia managed Mark. We got to do the support for many of those acts i.e. Jackson Browne, Maria Muldaur, Tom Waits, Rodriguez, Joe Cocker, to name a few. This elevated us to the Concert stage which helped me hone my craft even more. [taken from Joe Creighton's website]
.
This post consists of FLACs and MP3's (320kps) ripped from a newly acquired vinyl pressing which I picked up from a local second hand record shop 'bargin bin'. Just gotta love finds like this one - mint, mint condition for $5.  Full album artwork is included as usual along with Wheatley Records label scans.
To sweeten the deal, I'm also including some hard to get singles as bonus tracks - 3 tracks from his 1980 "Deep As You" E.P, the B-side to Ring Of Truth  "All Your Love" and his 1978 single "Comin' Back For More"  (thanks to Unc at Midoztouch for the E.P tracks)
If you're looking for Mark's two signature albums 'Only Human' and 'Sweet Nothing' you'll find them at Aztec Records.
.
Track Listing 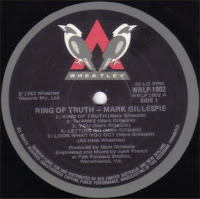 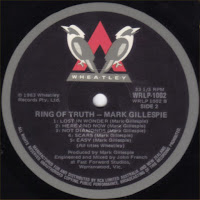