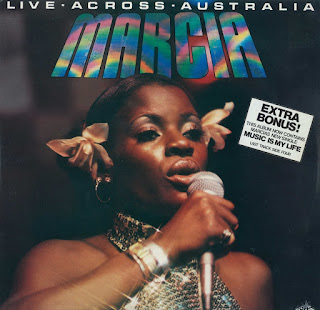 Marcia Hines is the hardest musical act to review in Australia. She is so nice. She works so hard. Everyone loves her. (There is even nearly five minutes of applause on Side 4 of this album to prove how much everyone loves her). But underneath all the adulation lies the unspoken question: "How good is she really?' And everyone knows the answer is; "Not as good as we like to pretend."
And the damn trouble is that she is good. Just not that good. Shit, not even Aretha is that good. Anyhow, you can hear exactly how good (warts and all) on this live double album. All the hits are here. What is missing is maybe a good reason for releasing the record. Like there is this audience participation bit on "I've Got The Music In Me" that is Pittsville. Either the audience didn't respond ("We love you Adelaide!") beyond clapping, or else the recording didn't capture it. In either case the attempt should never had made the record. And then we have at least one song per side that is "black" which would be all right except that "black" material is generally speaking, Marcia Hines' weakest point. Like Etla Fitzgerald, this lady is primarily a pop singer, not a soul singer. Even though she does a fantastic job with "More Than You'll Ever Know", a blue soul-jerker by grey brother Al Kooper. 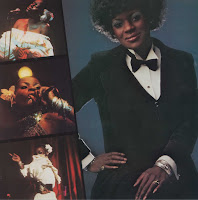 The best moments are the hits — but we knew that already. The best track overall however, is probably the bonus studio track "Music Is My Life". The fact is, she sounds better in a studio Which is strange, because she is quite a performer in person. Live, her movement rivets attention. But on this album she sounds, if anything, cooler than we are used to hearing her. That could be because of the arrangements. Jackie Orzaczky's idea of a good arrangement is pedestrian — or so it seems here. If you have to make the orchestra come on like the Brian May Showband in order to keep attention on the singer there is something wrong. But at other times Hines has to yell to be heard, and she is given no space to be subtle and damn little sympathetic backing compared to what she gets in the studio. There doesn't seem to be much here to feed on, or interact with, musically speaking. And this means that she has to produce the excitement on her own, which is no good for a singer. If you have to do it all yourself you run the risk of ending up like Tony Bennett or Peggy Lee, both of whom are marvellous musos who pack all the punch of an apricot yoghurt. 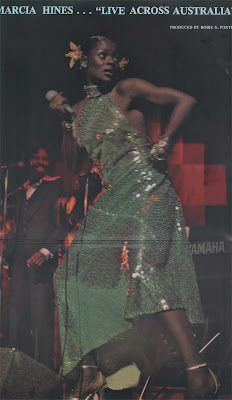 This woman could be a really important pop singer. She hits hard with what she does. She phrases great. She understands, the music in what she has to sing. Look, she even has a trunkload of boss material. Robie G. Porter alone could keep her in velvet for the rest of her days, arid that doesn't count the ear (Hers? Porters?) that finds just the right songs from musicals and so on.
So why isn't she better right now? The album has some answers. On Side 1, she introduces "Maybe It's Time To Start Calling for Love" as a brand new song. The tune is her meat: it is sensitive, melodic, haunting. But she gives it a banal, superficial run-through. Maybe she hadn't had the time. I can't imagine that she still does the song in such a perfunctory way, if she still does it. By now she should have got inside it the way she got inside Shining and the rest. What I am saying is that the lady needs time right now even more than she needs her fans love.
She needs time to learn to curb that blitzkreig attack on songs like "Love Is Blue" and "Jumpin' Jack Flash". Going too far too fast is a cliche fault with pop singers, but overcoming it is what seems to eventually separate the stayers from those that don't last the course. But all her biggies sound good even in watered-down versions, and there's one other thing that to me, is the most exciting thing on both records.

That is the way she does "Do You Know What It Means To Miss New Orleans? She does it bloody well. This is one of those simple songs people dug before the revolution, and it takes a lot of gentle hard work to make-it into anything personal. Most singers don't have the patience or maybe the sensitivity to do songs like this very well and the fact that she does (and she has been doing it for some time) suggests both that she is going to become tremendous as she goes on, and that when the time comes to put her in the plush nightclubs-where-you-pay-a-lot-of-money-just-to-sit-down she'll fit like a hand in a glove. A bit of a warning here,'this song probably has the worst arrangement on the album, rising to cyclone level before it is through, and full of 50's brasnicks.
Don't get me wrong - this is a good album. It might do for a "greatest hits" stand-in. But really, the only reason it exists is so that people can have a souvenir of the tour and like that funny paperweight you brought home last summer, it probably won't be long before 'Live Across Australia' is gathering dust in a corner somewhere  [Review from RAM Magazine, 'Vinylising', June 30, 1978. p26]

.
This post consists of FLACs ripped from my double vinyl set that I purchased when Marcia was high in the Australian charts. In fact, I'm pretty sure I bought it at Readings Records in one of their stores located at La Trobe University were I was studying at the time.  Amazing what you can remember sometimes!  Full album artwork along with a restitched gatefold and label scans are included. A scan of the original RAM review article is also included along with select photos of Marcia.
Please note that I took the liberty of editing out some of the applause on various tracks, as it becomes rather tiresome after awhile and in my opinion, detracts the listener from the music. 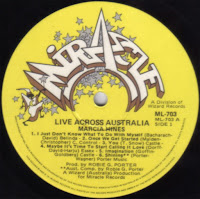 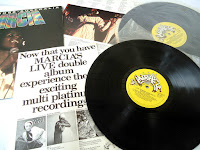