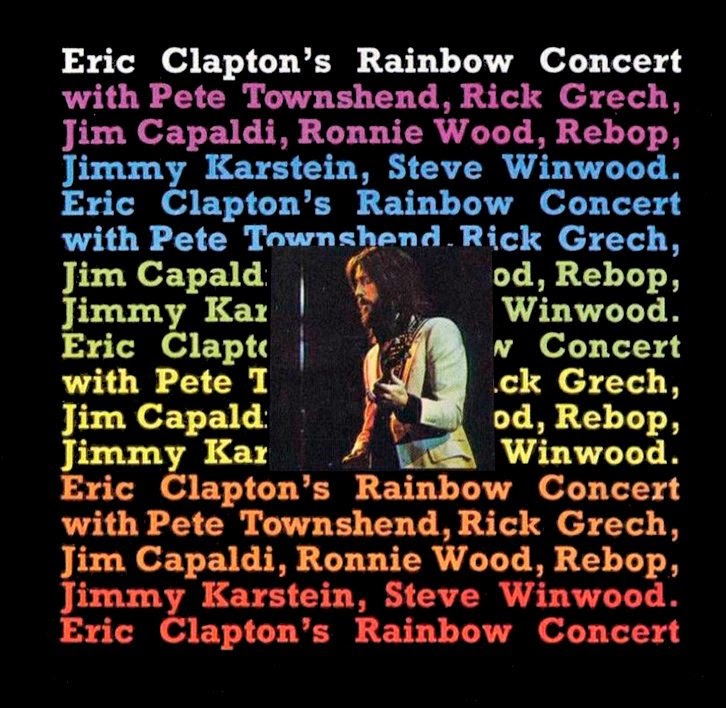 Rock stars doing disappearing acts wasn't entirely new by the early Seventies. Bob Dylan conveniently used a motorcycle accident as a ruse to fade away for three years in the late Sixties. The Beatles escaped the pressures of post-Sgt Pepper fame by retreating to a hideaway in the foothills of the Himalayas with their spiritual guru the Maharishi. But Eric Clapton's self-imposed exile from pop fame - which, at its height, had seen "Clapton is God" graffiti spray-painted all over London - had led him straight into a career- and life-threatening drug habit. "I had to go into the darkness," he explained later.
Friend and fellow guitarist The Who's Pete Townshend, who'd been deeply affected by the recent deaths of Brian Jones and Jimi Hendrix, had seen the warning signs. So, too, had Lord Harlech, aristocrat father of Clapton's girlfriend Alice Ormsby-Gore. Together the pair hatched a plan to get Clapton working again.
After little more than a week of rehearsals at Ronnie Wood's Hampton Court home, Eric Clapton emerged with an all-star band featuring Jim Capaldi, Steve Winwood, Ric Grech and Rebop alongside Townshend and Wood. George Harrison and Ringo Starr, Paul and Linda McCartney, Elton John, Joe Cocker and Jimmy Page were just a few of the famous faces in the audience, together with a couple of thousand fans, all eager for a rare glimpse of the guitar guru.

Because of the precarious nature of Clapton's condition, the makeshift band was privately dubbed The Palpitations, due to a suspicion that the guitarist might bottle the performance. It was a close thing: Clapton arrived just one minute before he was due on stage.
Bearded and a little heavier than when he was last seen in public, he opened with 'Layla' and everyone's nerves quickly steadied. It was a historic show, but not, reckoned the guitarist, necessarily a classic one. "Well under par," Clapton admitted later A surfeit of guitarists took the edge off his playing, though less remarked upon at the time was the change in his voice, which had acquired a new soulful edge - but everyone was just simply delighted to have him back. [extract from 'I was There - Gigs That Changed The World' Mark Paytress, 2005. p160]. 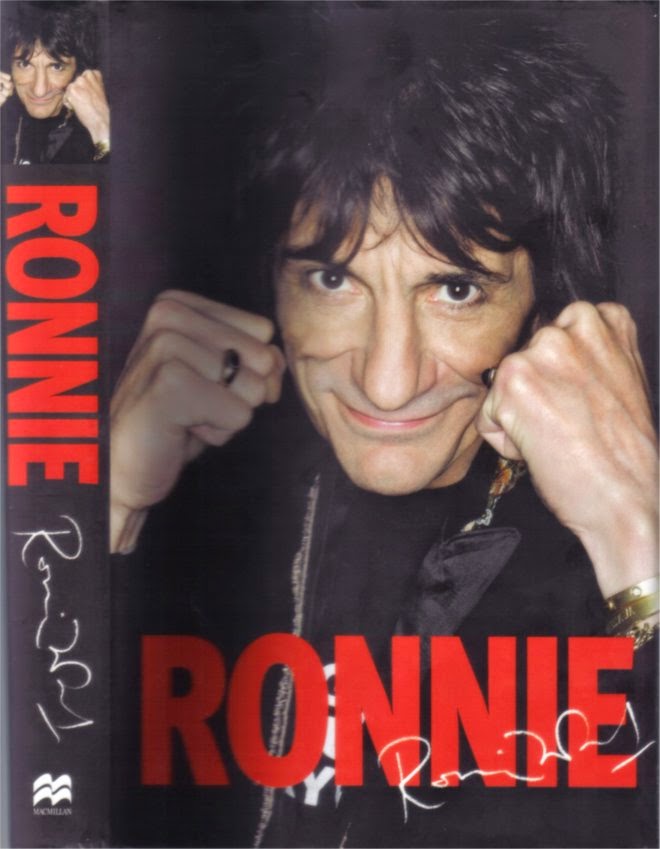 Ronnie Wood shares his recollections of the event....
Pete Townshend came to the Wick one night, because he was worried about Eric Clapton.
After Eric's group, Derek and the Dominos, busted up in 1971, he withdrew with his then girlfriend, Alice Ormsby-Gore (Lord Harlech's daughter who, sadly, died of an overdose), and the two of them stayed stoned on heroin for two years. I mean, they became hermits. The only time I can think of during those two years when Eric came out into the real world was in August 1971, when George Harrison invited him to Madison Square Garden in New York to take part in his Concert For Bangladesh. He showed up, played, and after that he and Alice just shut the door again and stayed smacked out.

All their friends wanted to do something and many of them tried, but Eric and Alice didn't want to know. Pete grew so worried that he decided we just couldn't have this any more, and was determined to do whatever he had to in order to get them straight. His answer was to put together a concert and then to convince Steve Winwood and me that it was time to drag Eric out of his reclusion in Surrey and up to London for rehearsals. Which is exactly what we did. We literally dragged Eric out of his house and moved him into mine. We made him spend ten days at the Wick with us, rehearsing. Along with Eric, Pete, Steve and me were Jimmy Capaldi from Traffic, who played drums and sadly died in January 2005, Jimmy Karstein also on drums, Reebop Kwaku Baah, who was on percussion, and Rick Grech on bass.
. 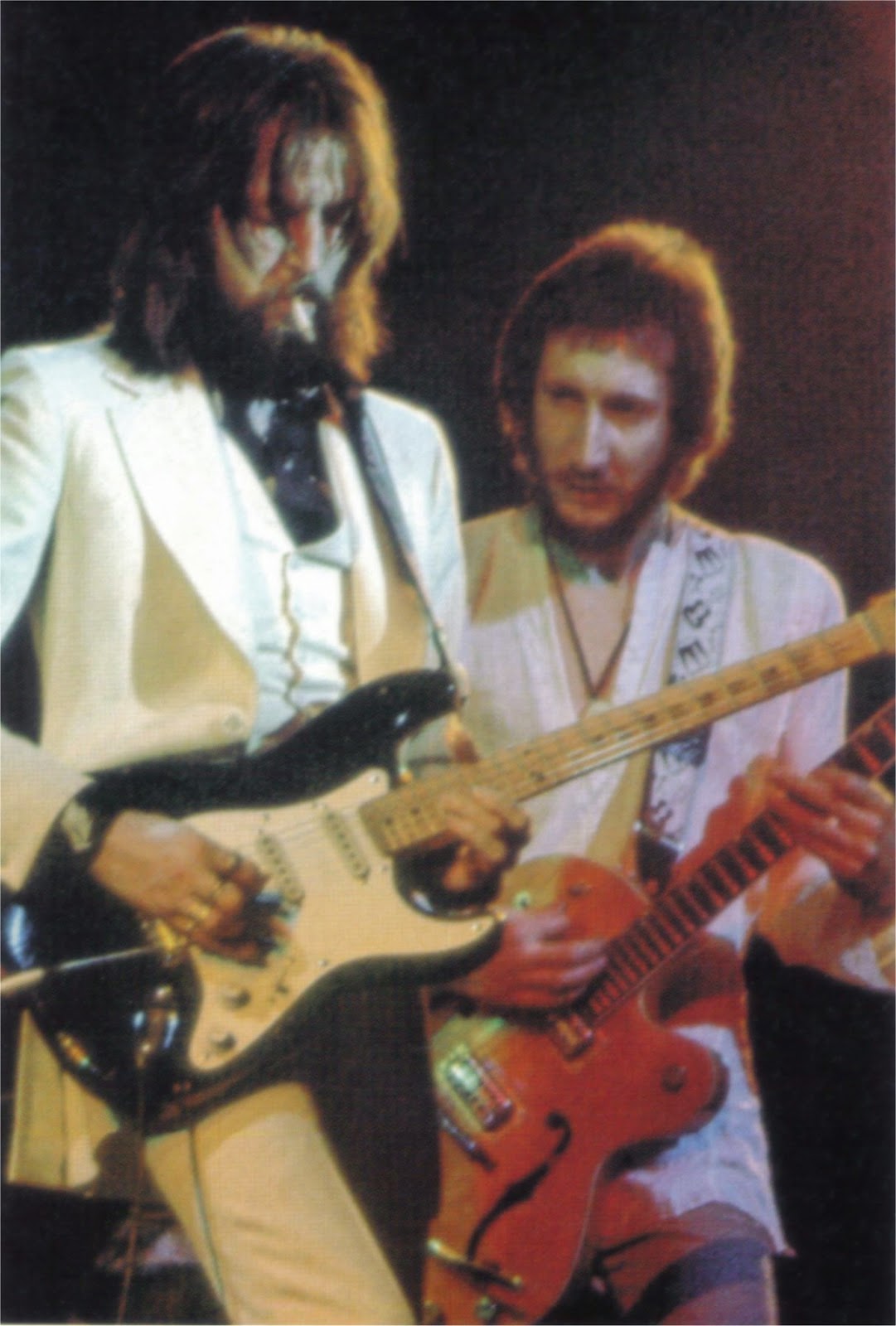 The Rainbow Concert was held on 13 January 1973, at the Rainbow Theatre in Finsbury Park, formerly the Astoria, where, back in '57, I first saw Duke Ellington's orchestra with Sam Woodyard on drums and 'Cat' Anderson on trumpet and where I also played my first concert with the Jeff Beck Group. During rehearsals, it was obvious to me that Eric hadn't lost anything over those two years in seclusion. He'd always been my premier guitar inspiration, and when we took the stage at the Rainbow that night everyone else knew it too. The place was packed and went wild when we opened the show with one of rock's definitive love songs, 'Layla'.
George Harrison was in the audience that night with his wife, Pattie Boyd. She was an absolute beauty who had had a bit part in the movie A Hard Day's Night, and had met George on the set. He fell for her, married her and wrote the song 'Something' for her. But Eric was in love with Pattie, too, and he'd written 'Layla' for her. From the audience's reaction, everybody must have known that.
. We did the Hendrix hit 'Little Wing' and lots of Eric's big songs like 'Let It Rain', 'Badge', 'After Midnight' and 'Bell Bottom Blues'. By the time we reached the end of the set with 'Key to the Highway' and 'Crossroads', no one had any doubts - Eric was back.
.
That show was a turning point in his career because, as he later said, 'Pete Townshend gave me faith in myself.' It was also a turning point in mine. Eric and Pete had me doing the Duane Allman slides in numbers like 'Layla' and I had to learn all these complicated Clapton songs which I'd never played before. That they wanted me to be their Duane Allman was a big feather in my cap. The fact that they elected me to play the part of Duane suited me fine, as he was my bottleneck hero ever since I heard him play on Aretha's The Weight'. All the more so because it was the first time I'd played with the really big boys, boys I respected. I felt like Elmore James! [Extract from Ronnie Woods Autobiography 'Ronnie', McMillian Publishers, 2007. Chapter 8, Rainbow, p104-106]
.
.This post consists of MP3's (320kps) ripped from vinyl and includes both artwork for LP and CD, plus label scans.  I have also chosen to include as a bonus track, "Layla" which was their opening track at the Rainbow Concert (and comes from the expanded CD release of this famous concert). I was always mystified why the original vinyl release didn't include this 'classic' track (and perhaps drop one of the lesser popular tracks like "Pearly Queen" or "Roll It Over"). Although I've listed it as track 7 it would probably be better positioned as track 1 when you listen to this concert, so you get the benefit of the opening dialogue.
My only criticism of this concert is the somewhat average quality of the recording that was produced by the record producers for both the Vinyl and CD releases, so don't shot the messenger !
.
Track Listing 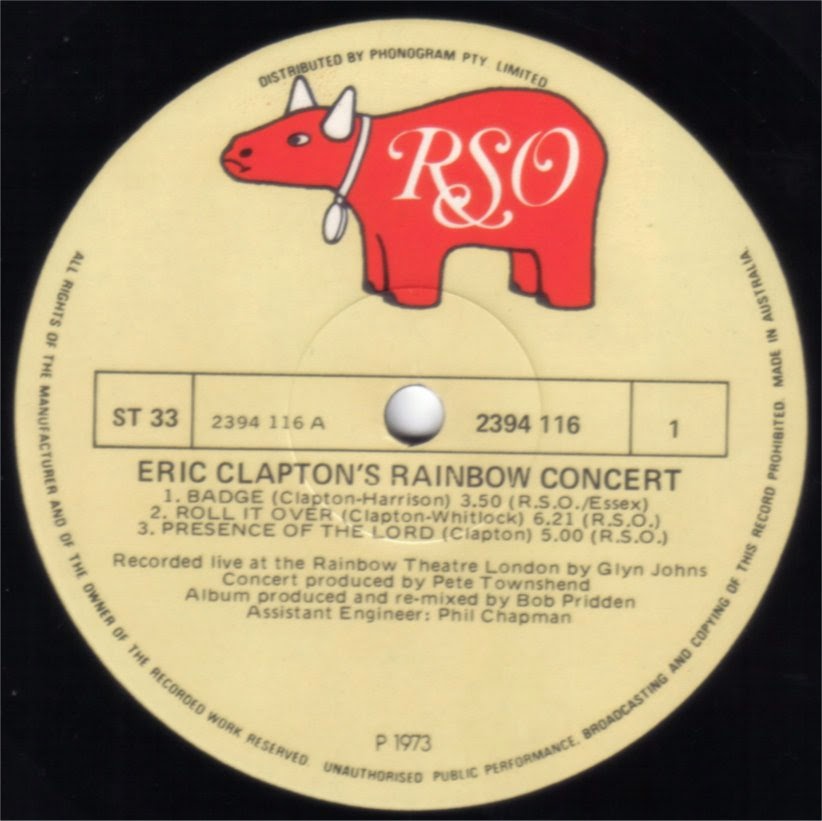