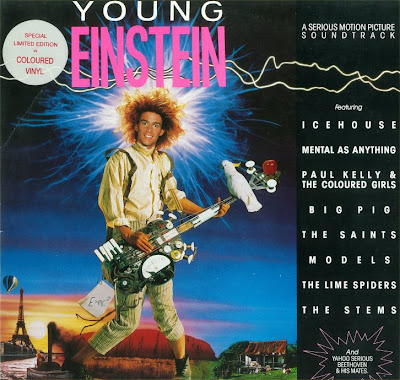 In 1988, Yahoo Serious became the first Australian to write, direct, produce and star in a feature film. Young Einstein was a national and international hit both critically and at the box office. Made on a shoestring budget which Yahoo pulled together by selling his car and borrowing cameras, Young Einstein went on to gross over $100 million and reach number one in many countries including Australia, Britain, France, Germany and Canada during 1989-90. In America Young Einstein was one of the most successful Australian movies ever released and became a cult classic. The movie's soundtrack, produced by Yahoo, went double platinum.
In February 1989 Yahoo was featured on the cover of TIME magazine. In the same year he was the cover of MAD magazine, made 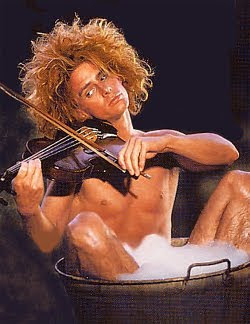 his own MTV show in New York and in a satire on TV reporting, he interviewed himself on 60 Minutes.
It was a strange encounter on a wild trip down the Amazon river which inspired Yahoo to create Young Einstein - the incredible untold story of Albert Einstein, the genius Tasmanian apple farmer. In 1905 he discovered Relativity, in 1906 he invented Rock and Roll.
.
The Movie
On a remote Tasmanian apple farm, the young wild-haired genius, Albert Einstein, splits the atom to make the world's first bubbled beer...and all hell breaks loose!
Beneath the film's rich tapestry of comedy beats the heart of a young man who dares to think differently.
Albert treks the vast Australian continent, sails to Paris and falls in love with Marie Curie - the world's most intelligent girl. He formulates E=mc2, 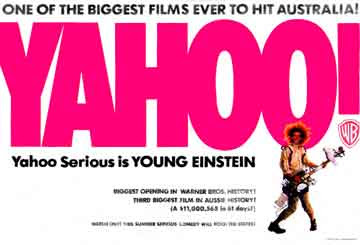 creates the world's first surfboard, invents the electric guitar and uses his greatest discovery - Rock and Roll, to save the planet from the atomic destruction that his revolutionary theories inadvertently caused.
The physics is illuminating, the collisions and fusions of music are revolutionary, writer/director/star Yahoo's eccentric Albert Einstein is charming. Young Einstein is an original comedy with a big brain, a warm heart and a celebration of a human spirit who dared to be different. [extracts from http://www.yahooserious.com/einstein.html]
.
The Soundtrack
Being an Aussie, I can see why old Yahoo Serious appeals to us lot and not many others. Like Vegemite, he's an acquired taste. Young Einstein 'the movie' might have left a bad taste in some mouths, but the soundtrack 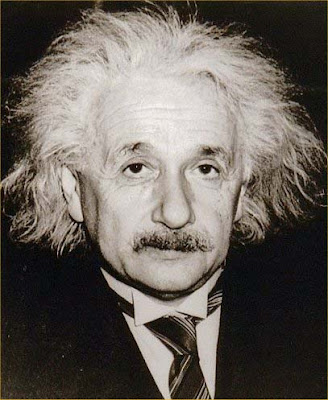 should have your ears ringing in delight.
The soundtrack is 100% Australian and contains some mighty tracks from The Saints, Mental As Anything and Big Pig (whatever happened to them?) and even some choice pop hits from The Models, Paul Kelly and Icehouse.
Also included are some obscure tracks by The Stems and The Lime Spiders who were part of the garage band music scene in the 80's and hold their own amongst the more popular bands on this soundtrack.
What stands out in this film the most is 'the choice of songs and how they are used in the film', which is quite exceptional. My favorite being the Icehouse rock anthem tribute to the land down under, "Great Southern Land". The scene it plays in could very well be a rock video, a la Midnight Oil or something. Music really carries this film a great distance from a plot that's not quite so well developed as it should be.
.

.
The rip was taken from my mint condition (and very pink) Vinyl LP at 320kps, and the bonus B-Side single tracks were also ripped from vinyl. I have also included full album artwork and artwork associated with the 3 singles that were taken from this soundtrack (The Saints, Mental As Anything and Big Pig). Choice photos from the movie are also included.
(Thanks to Deutros for The Saints B-Side single music and artwork)
Note: I also plan to post what I call the sequel to this album, the soundtrack to Yahoo's 'Reckless Kelly' movie which was released in 1993, so stay tuned.

Track Listing
01. Roll and Rock Music - Yahoo Serious
02. Rock and Roll Music - Mental as Anything
03. Music Goes Round My Head - The Saints
04. Who Can You Trust (Main Title) - Yahoo and Lulu
05. Dumb Things - Paul Kelly and the Coloured Girls
06. Hungry Town - Big Pig 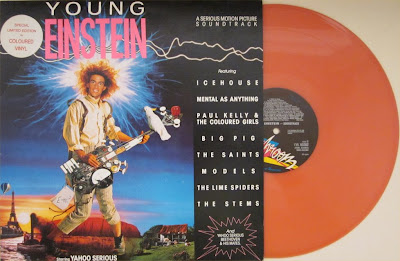