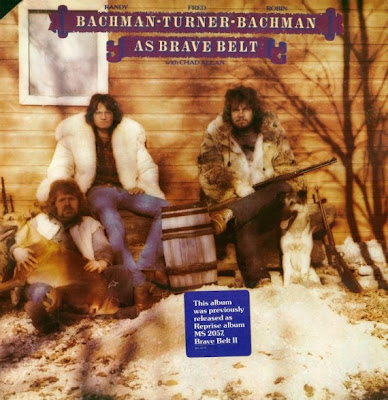 Just prior to the recording of the 'Share The Land' album in 1970, Randy Bachman chose to leave what would arguably become known as Canada's greatest group ever, 'The Guess Who'. After his first solo effort 'Axe' later that year, he decided to return to the confines of a group setting. Hooking up with brother Robbie on drums and keyboardist Chad Allan, who was part of the original Guess Who in the early 60's under the guise of Chad Allen & The Expressions, they formed Brave Belt in January of 1971. As a trio, it fell upon Randy to handle the duties of laying down the bass tracks while they searched for someone to take over full-time.
They hired CF (Fred) Turner after their first album had all but been completed. Though his name appears on the jacket, Turner actually had nothing to do with the self-titled debut, which was released on Reprise Records that summer. Backed by the first single, "Rock & Roll Band", the album was met 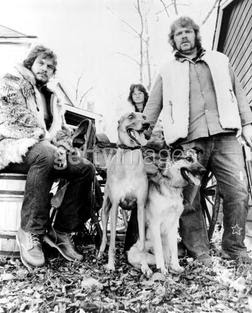 with relative indifference. While the band was on the road that fall, the second single hit the radio stations, but "Crazy Arms Crazy Eyes" didn't do much either.
By early '72, the band had migrated from Winnipeg to the west coast following their inaugural North American tour. They returned to Toronto's RCA Studios for the recording of the second album. With Randy again at the controls, the sessions were taking a heavier turn, with Turner contributing more, Randy Bachman, CF Turner, Chad Allen, Robbie Bachman writing 4 tracks on his own and co-writing "Put It In A Song" with Randy. At the same time Allen was contributing less - though he did co-write "Dunrobin's Gone", the group's biggest hit along with Bob Ericson, and penned "Waterloo Country" and helped the Bachmans with two other tracks. The band's only song written solely by an outsider was also present, with "Long Way Round" by Charles Charles. But by the time 'Brave Belt II' was released that summer, Allen's vision of the group, and the conflicts which arose from it, had led to his departure. He was replaced by a third Bachman, Tim and the group honed their chops touring pretty much non-stop in western Canada. Allen is not listed as a band member on the credits of Brave Belt II, although he writes and sings two of the songs, including Brave Belts only hit, the uber-folk "Dunrobin's Gone".
. 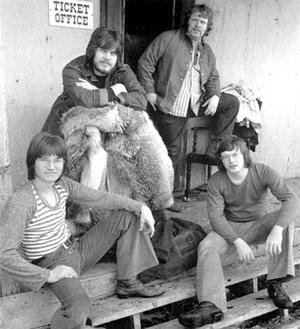 Frustrated at what he perceived to be poor support from Reprise, Randy began shopping around for another label while the band wrote material for their next record, which was steadily taking a heavier, grittier tone. They landed a deal with Mercury Records before the end of the year, but management was insisting on a name change, and Bachman Turner Overdrive was born.
Following the instant success of BTO, Reprise re-released Brave Belt II in 1974, under the name 'Bachman-Turner-Bachman as Brave Belt', which is where this rip originates from (and was the reason why I purchased the LP at the time).
Bullseye Records in Canada struck a deal with Randy in 2001 to re-issue the 2 Brave Belt albums (I & II), and included two bonus tracks "Hands And Faces" and a version of "Shakin' All Over", the track that broke The Guess Who into the limelight 25 years earlier. This compilation re-issue is still available if you hunt around [extract from www.canadianbands.com ]
.
Although Brave Belt is relatively unknown some 35+ years later, the importance of the band was summed up by Randy Bachman in a 2001 interview: "It was an innocent time of soul-searching. Nobody would play with me when I left The Guess Who. I was completely black-listed. I couldn't get a decent musician to play with me, except Chad Allan, who had also been in The Guess Who and left. He and I bonded together, and I might not have gotten started without him, even though he left sometime after that first album. Those [Brave Belt] albums are so important to me because, for the first time, I was making my own music, paying for it, finding strengths in it, and going through the process of finding the right music for the record. It led to me becoming a stronger producer for BTO. [extract from wikipedia]
. 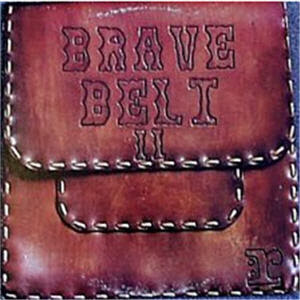 Brave Belt II has two or three decent songs, the very un-BTO "Dunrobin's Gone" being far and away the best song here. But there is no consistency, no momentum, and no showcase songs that would make you get excited about the album. "Waterloo Country" is probably my next favourite track and it exhibits some of those sparks that eventually ignited the band into becoming one of the biggest and most popular bands of the 70's - Bachman Turner Overdrive.
The re-issued cover is also a bonus in my opinion (compared with the leathery original - see right), as it is so indicative of that rough, country image that BTO portrayed during their heyday years.
The rip was taken from my vinyl copy (320kps) and includes full album artwork. Released by Warner on the Reprise label.
.
Track Listing
01 -  Too Far Away 3:38
02 - Dunrobin's Gone 3:10 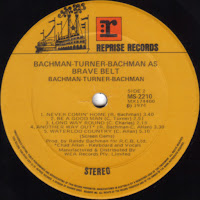