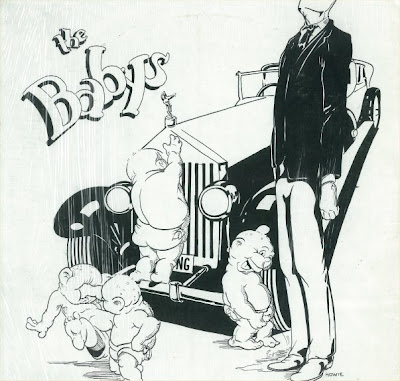 The Babys were a British rock/pop group best known for their songs "Isn't It Time" and "Everytime I Think of You". Both songs were composed by Jack Conrad and Ray Kennedy and reached #13 on the U.S. Billboard Hot 100 chart in the late 1970s.
The 1976-1978 Babys line-up consisted of vocalist/bassist John Waite, drummer Tony Brock, Keyboard player/guitarist Michael Corby, and guitarist Wally Stocker.
After Corby was sacked by Chrysalis in August 1978 a replacement was sought. The company brought in two musicians to replace the co-founder: Jonathan Cain on keyboards and Ricky Phillips to play bass. From 1979 until the final breakup in 1981 the Babys line-up consisted of vocalist Waite, drummer Brock, bassist Phillips, guitarist Stocker and keyboardist Cain. 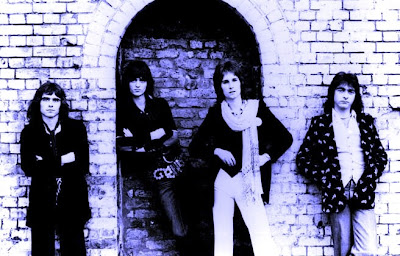 Corby had been dismissed and the control of the name of the band was never relinquished by him, in effect making the 1979 band a breakaway group from the original contract and not entitled to use the name.
The Babys Archives states a very strong case against the name being used after Corby and Millar were sacked, the original contract clearly has Corby as a member and never lists Cain and Phillips. Corby commissioned The Babys Archives a number of years ago to correct a number of misconceptions about the origins of the group. 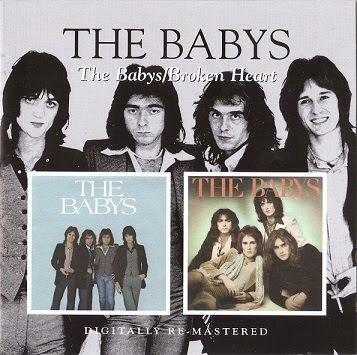 John Waite went on to produce a major solo hit, "Missing You", in 1984. Stocker and Brock worked with Rod Stewart and other mainstream artists including Elton John and Air Supply. Cain enjoyed major success with Journey and Phillips with Bad English. [extract from Wikipedia]
.
This bootleg is another one of my prize possessions in my record collection, although the quality of the recording isn't quite up to the standard of some of my other bootlegs. There is some distortion and occasional drop outs during this recording but overall it isn't too bad - probably a B+ rating would be fair. As far as I can gather, this is the first time this bootleg has been posted. In fact, there is scant information about this recording, other than it was recorded at the Old Waldorf Theatre in San Francisco, sometime in 1977.
.

.
The bootleg was released on the TAKRL label (The Amazing Kornyfone Record Label).
The Amazing Kornyfone Record Label (TAKRL) operated out of Anytown in the USA and was the brainchild of the late Dr. Terrence H. "Telly"fone, Art Gnuvo and Deek Kibard.
The sound quality of the recordings varied depending upon the origin of the source material. Some of the recordings were taken directly from other records, audience cassette tape recordings, FM radio broadcasts and television broadcasts. The quality was not really such an issue for the fans who were desperate to obtain any recording of their favourite artist. One of the most famous bootlegs of all times was an album of rare 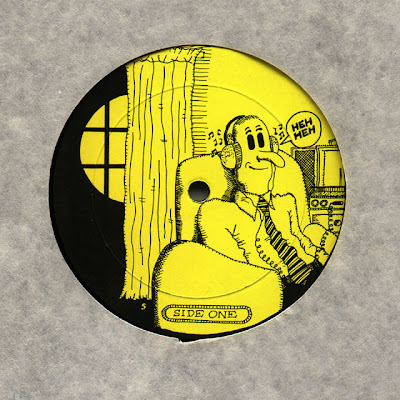 Bob Dylan recordings called The Great White Wonder. Some bootleg albums were so good they"forced" the legitimate record labels to officially release the material.
The album sleeves were usually two colour paper inserts that were slipped under the shrink wrap that enclosed the plain white cardboard album cover.
The Amazing Kornyfone Record Label was a legendary entity in the bootleg world. They never took themselves seriously however they always utilised high quality vinyl in the production of the records. You could usually obtain the records via various mail order outlets such as Toad Hall's Rare Records. [ extract from http://www.larkin.net.au/takrl/]
.
This post contains 2 separate mp3 rips (Side A and Side B) taken from my vinyl copy, at 320kps. I chose not to segment the songs as they tended to run into one another, and I wanted to retain the natural flow of the concert and dialogue spoken between songs.
I have also included full scans of the LP covers and select photos of the band during their early years. The only short comings of this concert was the absence of their hit single "Isn't It Time" which is strange, as this was their biggest hit at the time; and the slightly boring drum solo in the last track "Do You Wanna". Highlights would definitely be "Rodeo" / "Wild Man" on Side A and "I'm Falling" and "If You Could See Me Fly" on the flip side. And what about the front cover - it says it all doesn't it ?
NB> The back cover track listing was slightly inaccurate with "Wild Man" missing after "Rodeo" and "Rescue Me" missing the letter 'c' (which I fixed many years ago using stencils !)
. 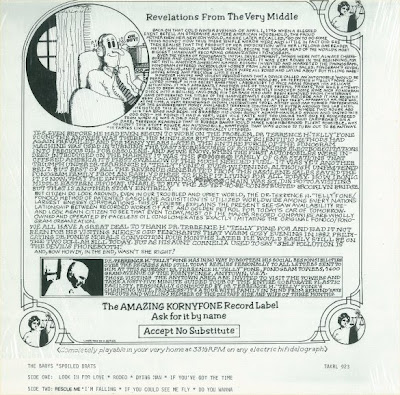