W.O.C.K On Vinyl - Bart Sells His Soul - In The Garden Of Eden (The Simpsons)

.
Before things get too serious here at Rock On Vinyl, I thought it might be fun to post a song at the end of each month, that could be categorized as being either Weird, Obscure, Crazy or just plain Korny.
.
. 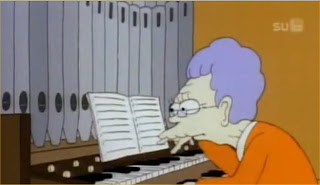 In the episode of the Simpsons entitled "Bart Sells His Soul", the hit track "In-a-Gadda-Da-Vida", by Iron Butterfly is used as a hilarious parody during a church scene. The show was the fourth episode of Season 7, and first aired on October 8, 1995. The episode was written by Greg Daniels and was directed by Wesley Archer. The plot of the episode is a parody of the book "Are You There God? It's Me, Margaret.", by Judy Blume.
The Simpsons serve as church ushers one Sunday morning. Bart uses the opportunity to switch the intended hymn with a song called "In the Garden of 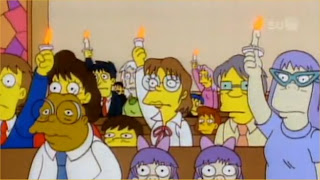 Eden" by "I. Ron Butterfly"; actually, the song is Iron Butterfly's "In-A-Gadda-Da-Vida".
Reverend Lovejoy initially fails to notice anything amiss (or the lewd behavior of congregants) but he eventually catches on, noting "This sounds like rock and/or roll". At the end of the 17-minute song (shortened in this episode of course), the exhausted organist collapses on the organ.
Reverend Lovejoy demands that the perpetrator step forward, and Milhouse names Bart. As punishment, Lovejoy assigns Bart and Milhouse to clean the organ pipes. Bart is indignant with Milhouse, who claims he feared for the fate of his soul. Bart proclaims that there is no such thing as a soul and agrees to sell his to Milhouse in the form of a piece 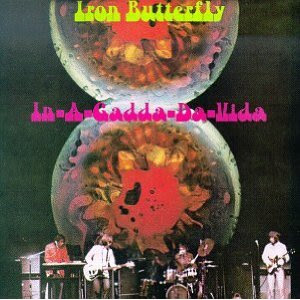 of paper saying "Bart Simpson's soul". After the deal is made, Lisa tells Bart that he will regret selling his soul, but Bart does not believe her. Bart soon finds that his dog, Santa's Little Helper, will not play with him, automatic doors fail to open for him, and when he breathes on the freezer doors at the Kwik-E-Mart no condensation forms. He begins to suspect he really did lose his soul, and sets out to retrieve it.
"In-A-Gadda-Da-Vida" was a psychedelic rock epic by Iron Butterfly, released on their 1968 album 'In-A-Gadda-Da-Vida', and is one of my all time time favourite psychedelic tracks. At a little over seventeen minutes, it occupies the entire second side of the 'In-A-Gadda-Da-Vida' album. The lyrics are simple, and heard only at the beginning and the end. The track was recorded on May 27, 1968, at Ultrasonic Studios in Hempstead, Long Island, New York. The recording that is heard on the album was meant to be a soundcheck for 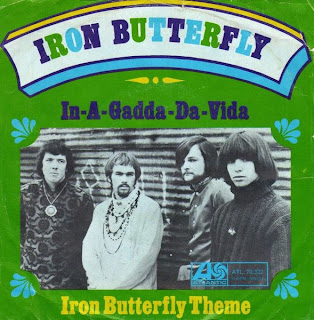 engineer Don Casale while the band waited for the arrival of producer Jim Hilton. However, Casale had rolled a recording tape, and when the rehearsal was completed it was agreed that the performance was of sufficient quality that another take wasn't needed. Hilton later remixed the recording at Gold Star Studios in LA. The single version (included here) reached number thirty on the U.S. Billboard Hot 100.
So for this posting, I have included both the 'Simpson's version of 'In the Garden Of Eden' along with the shortened 'single version' released by Iron Butterfly - and therefore classify this WOCK on vinyl posting under the category of 'Korny' but still very, very Cool !
.
The Simpsons Link (7 Mb) New Link 02/08/2015
.
Posted by AussieRock at 7:29 PM