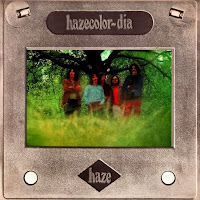 I bought this album from an import shop sale bin many, many years ago (attracted by the multi-coloured cellophane cover) Not sure what happened to it but I most likely traded it - apparently it is now a very hard to find collectors item!
Historically undocumented, there's not a lot I can tell you about Haze. However, Bacillus Records must have deemed them as important, in that they presented their debut LP in a unique cover - an LP size transparency slide (known as a "dia" in Germany) in the style used by Agfa!
Hazecolor-Dia was a Hauke & Dierks production, recorded during April 1971 at the Clerks Studio. The gimmick sleeve was created by designer Walter Seyffer, who also created the cover of the Nine Days Wonder debut album and was their singer, too.
. 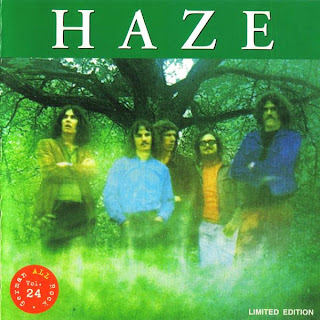 Haze were amongst the first to present the uniquely German "hard-rock" sound, into which they mixed a complex variety of progressive elements, featuring guitars to the fore and quite a bizarre vocalist. They were also typical of the Bacillus Records sound, if more song based than most, venturing on to psychedelic and blues realms.
Recorded in 1971, this German album is a complex progressive rock effort with plenty of excellent guitar playing and some nice psychedelic touches (as one would expect by its psychedelic cover)
Haze play interesting hard-rock that reminds me of early Nektar or Message. All five tracks were written by Dietmar Low. Slow, cleverly-arranged heavy progressive rock 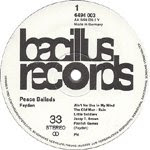 numbers, psychedelically fueled with a faint blues tinge, featuring humorous lyrics: "A Way To Find Paradise" tells about a hippy's struggle to get his hashish to smoke! Scherler really had a strange and wild voice (he usually screamed as loudly as he could), adding much to their gutsy freak rock style. Several tracks also featured flute (the flute player is not identified on the cover)
Haze, in part, seem to draw inspiration from The Edgar Broughton Band, Arthur Brown, and Captain Beefheart. This, their only album is recommended for all freak rock fans!
.
The rip was taken from CD remaster at 320kps and includes full album artwork. Enjoy!
.
Track Listing
01 - Peaceful Nonsense (7.18)
02 - Fast Career (8.35)
03 - Be Yourself (6.26)
04 - A Way To Find the Paradise (6.58)
05 - Decision (10.14)
.
Band Members:
Christian Scherler (vocals)
Heinz Schwab (lead guitar)
Hans-Jürg Frei (guitar, organ)
Dietmar Löw (bass)
Kurt Frei (drums)
.
Haze link (93Mb) Link Fixed 27/01/2013
.
Posted by AussieRock at 8:53 PM