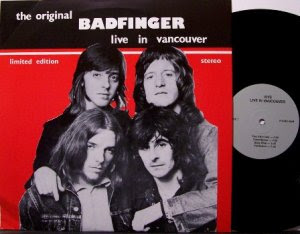 Badfinger was a rock band formed in Swansea, Wales in the early 1960s (playing under the name of "The Iveys") and was one of the earliest representatives of the power pop genre. During the early 1970s the band was tagged as the heir apparent to The Beatles, partly because of their close working relationship with the 'Fab Four' and partly because of their similar sound. However, Badfinger fell victim to some of the worst elements of the music industry, resulting in its two principal singers and songwriters (Pete Ham & Tom Evans) committing suicide in 1975 and 1983 respectively .
In October 1969, while the release of "Come and Get It" was pending, the band and Apple Records agreed that a name change was now critical. "The Iveys" were still sometimes confused with "The Ivy League", and the name was considered too trite for the current music scene. After much debate, the group changed their name to Badfinger. The name 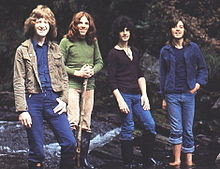 Badfinger had been suggested by Apple's Neil Aspinall as a reference to "Bad Finger Boogie", an early working title of Lennon/McCartney's "With a Little Help from My Friends", the idea alleged by Neil Aspinall that Lennon had composed the melody on a piano using only one finger, after having hurt his forefinger.
For over a month the group unsuccessfully auditioned band members to replace Ron Griffiths, chiefly bass players. With the release date of "Come and Get It" fast approaching, Badfinger finally hired Liverpudlian guitarist Joey Molland (previously with Gary Walker & The Rain, The Masterminds, and The Fruit-Eating Bears), which required Evans shift to bass guitar.
"Come and Get It" was released in December 1969 in the U.K. and January 1970 in the U.S. It reached Top 10 throughout the world, including #3 in the U.S. Billboard charts. For the group's initial LP release, their three songs on the soundtrack LP were remixed and combined with some older Iveys tracks (including seven songs from the rare Maybe Tomorrow album). This was released as Badfinger's first album 'Magic Christian Music'. The album peaked at #55 on the Billboard album charts in the U.S.
.

New Badfinger recording sessions commenced in March 1970 with Mal Evans producing. Two songs were completed and submitted for the next single, including "No Matter What." The song was rejected by Apple staff as a potential single. Geoff Emerick then took over as their producer and they completed the album by late July 1970. The 'No Dice' LP was released in the U.S. in late 1970. It peaked at #28 on the Billboard charts. A newly re-mixed "No Matter What," was released as the single and it peaked at #8 on the Billboard Hot 100 while achieving across-the-board Top Ten worldwide. Another track from No Dice, "Without You", as covered by Harry Nilsson became an international hit in early 1972, reaching the Billboard #1 slot. The composition was eventually covered by hundreds of artists and has since become an all-time ballad "standard."
Badfinger toured America for three months in late 1970 and were generally received well, although the group complained of constant comparison to The Beatles. For example, in his rave review of No Dice in 1970, Mike Saunders, a critic for Rolling Stone wrote that "it's as if John, Paul, George, and Ringo had been reincarnated as Joey, Pete, Tom, and Mike of Badfinger." Media comparisons between Badfinger and The Beatles would continue throughout Badfinger's career.
During this time, various members of Badfinger also recorded on sessions for fellow Apple Records labelmates, most notably playing acoustic guitars on tracks from George Harrison's All Things Must Pass and providing backing vocals on Ringo Starr's single "It Don't Come Easy." 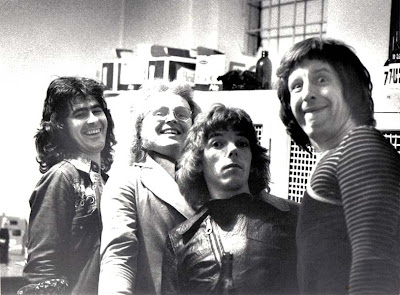 Evans and Molland performed on John Lennon's album 'Imagine', and all four members of the band appeared as backup musicians throughout George Harrison's Concert for Bangladesh in August 1971, with Ham duetting with George Harrison on "Here Comes the Sun".
Badfinger finished recording its third album with Geoff Emerick as producer; however the album was rejected by Apple. George Harrison then took over as producer in spring of 1971. Harrison later pulled out of the project due to his Bangladesh commitments and the album was then completed by Todd Rundgren. 'Straight Up' was released in the U.S. in December 1971 and spawned two successful singles: "Day After Day" (Billboard #4) and "Baby Blue" (#14). The album reached #31. It included some uncredited special guest appearances from George Harrison, Leon Russell and Klaus Voormann.
"Day After Day" was written and sung by Pete Ham and produced by George Harrison, who plays some of the slide guitar parts of the song along with Ham. The record also features Leon Russell on piano. It would become the group's highest charting single there, peaking at number four on Billboard's Pop Singles chart. It also reached the top ten on the UK Singles Chart. It remains the band's best-known song, most notably for the slide guitar solos. It went Gold in March 1972, becoming the band's first and only gold single. The single reached number ten on Billboard's Easy Listening survey.
Because of all of the overdubs, Badfinger was hesitant to play this song live for years, since it was impossible for a four-piece group to reproduce the single production. However, the song was included in the setlist for Badfinger's 1974 tour, and is included in the Live In Vancouver LP, provided here. 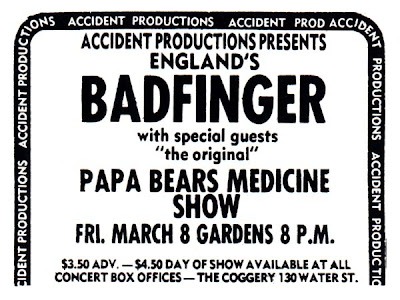 By 1972, the group was under contract to release only one more album with Apple Records. Despite Badfinger's success, Apple was facing troubled times overall and its operations were dwindling down. Label president Allen Klein informed Badfinger's management that the label would not be as generous regarding a new contract. Badfinger's fourth and last album for Apple, 'Ass', had begun as far back as early 1972 and would continue at five recording studios over the next year. Rundgren, who was originally hired to produce, quit in a financial dispute during the first week; the band then produced itself, but Apple rejected that version of the album. Finally, Badfinger hired Chris Thomas to co-produce and complete the album. During the recording of 'Ass', Polley negotiated a deal with Warner Brothers Records that required an album from the group every six months over a three year period. The group signed the deal, despite a highly-suspicious Evans, and the Ass front cover featured his idea, a jackass observing a huge carrot being dangled (a metaphor of the band being enticed by the big money Warner Brothers contract.) The Ass release was held up further by Apple because of legal wrangling, as Polley had used the leverage of Molland's unsigned song publishing as a negotiating ploy. Apple listed the writers on the LP as "Badfinger" to try and cover up discrepancies and get the LP to the market. But both Ass and its accompanying single, "Apple of My Eye", failed to reach the Billboard Top 100. (Wikipedia)
Included here is a rare bootleg of recordings taken from a live concert recording from March 8, 1974 at the Exhibition Gardens in Vancouver, B.C. Canada. The rip was taken from Vinyl at 192kps and includes limited album artwork. See Badfingerlinks for more details of this concert plus photos.
.
Track listing
01 - Day After Day
02 - Constitution
03 - Baby Blue
04 - Perfection
05 - Blind Owl
06 - Timeless
07 - No Matter What
.
Band Members
Pete Ham (vocals, guitar, keyboards)
Tom Evans (vocals, bass, guitar)
Joey Molland (vocals, guitar, keyboards)
Mike Giggins (vocals, drums, percussion, keyboards)
.
Badfinger Link (52Mb) REPOST
.
Posted by AussieRock at 7:56 PM