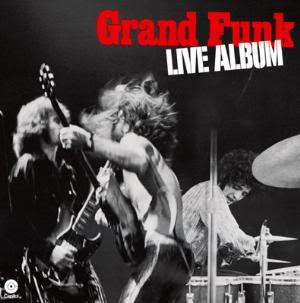 Grand Funk's  Live Album is the bands first live offering (a double one at that), and was put on sale in November 1970 by Capitol Records. It was produced by Terry Knight, who had just become their manager-producer, and helped steer the band to international fame, by first getting them onto the bill---for free---at the 1969 Atlanta Pop Festival, a performance that convinced Capitol to sign the trio.
The band's name is a play on words of the "Grand Trunk Western Railroad," a railroad line that ran through the band's home town of Flint, Michigan. The band was formed in 1968 by Mark Farner (guitars, keyboards, lead vocals) and Don Brewer (drums, lead vocals) from Terry Knight and the Pack, and Mel Schacher (bass guitar) from Question Mark & the Mysterians. 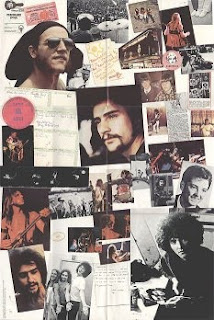 In 1969, the band released its first album titled On Time, which eventually went gold in 1970. During the same year, a second album, Grand Funk (AKA the Red Album), was awarded gold status. The hit single "I'm Your Captain (Closer to Home)," from the album Closer to Home, was also released in 1970 and was considered stylistically representative of Terry Knight and the Pack's recordings. By 1971, Grand Funk broke The Beatles' Shea Stadium attendance record by selling out in just 72 hours.


The "Live Album", went RIAA Gold almost immediately, and earned GFR their fourth Gold Record Award in just one year. The raw energy of these live performances was captured without the use of any re-mixing, over-dubs or enhanced audio engineering. This "direct recording" method leaves a bit to be desired from a technical standpoint, but showcases the band in a live environment and never lets up in its effort to convey GFR's raw power as well as a sense of "being there" at a Grand Funk event.
. 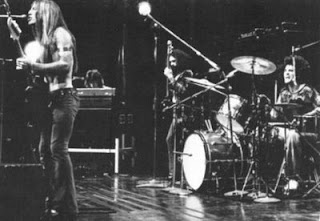 The album's gatefold cover depicts a photograph of the band at the Atlanta International Pop Festival in July 1970, but none of the music was actually recorded there. The album was recorded at several Florida venues during June 1970.
I first heard this album while helping a friend's band set up for a gig, and hearing 'Paranoid' and 'Inside Looking Out' for the first time, blasting out from a stack of Marshall Amps and Speakers is something that I'll never forget - I can only imagine what it was like at the original concerts.
.

There is not one bad track in this live set and Mark Farmer is absolutely brillant - demonstrating some breath taking guitar work and taking full command of lead vocals throughout the whole show. The atmosphere of this live recording is simply electric and the crowd's enthusiasm is fully evident from the start when Farmer attempts to reason with the crowd asking them to sit down at the front, so those at the back of the stadium can see. I always compare this double live set with their other official live release "Caught In The Act", but it doesn't come close to capturing the full energy and excitement that the "Live Album" presents. Probably the one thing missing from this live set which would have put the icing on the cake, was their classic "I'm Your Captain (Closer To Home)". Perhaps because it was only released that same year, they felt it was still too new for inclusion in their live repetoire.
If you haven't heard this live set from Grand Funk, then you really don't know what you are missing. The rip included here was made from a remastered CD at 320kps and includes full album artwork. Thanks to ChrisGoesRock for the concert poster below.
.
Track Listing 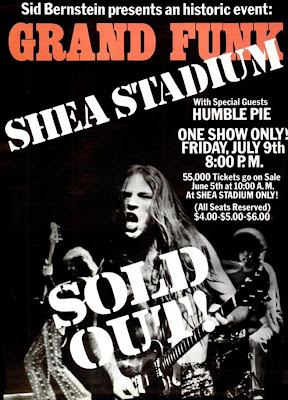