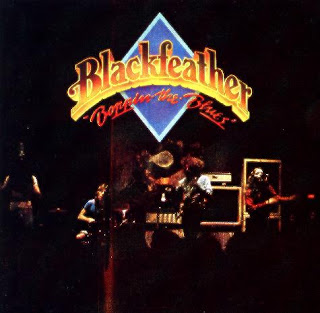 Blackfeather was an Australian band founded in 1970 and led for most of its ten-year existence by singer Neale Johns. It began as a progressive rock unit, which can be heard on Mountains of Madness (1971), but later moved toward a simpler rock & roll style, resulting in the Australian #1 hit "Boppin’ the Blues" and the 1974 Live album. The group’s personnel was fluid in the second half of the ’70s, especially after Johns moved to the U.K. to form Fingerprint.
Although the record credited Carl Perkins as songwriter for "Boppin' the Blues", and is usually described as a reworking or a makeover of the Carl Perkins song, the two records, played back-to-back, reveal nothing in common but their title. Lyrically, melodically and structurally, they are different songs.
Jonathan Sturm, a friend of Blackfeather pianist Paul Wylde, writes at his website: Neither Paul nor the rest of the band could remember the lyric of the old Carl Perkins song, so they wrote their own.
.
It seems to me that Blackfeather ended up writing a completely different song altogether, but generously kept the Carl Perkins songwriting credit.
.

John Robinson (lead guitar), Leith Corbett (bass) and Mike McCormack (drums), all from the Dave Miller Set, along with vocalist Neale Johns formed the original line-up of this progressive rock band, although Corbett and McCormack were soon replaced by Bob Fortesque and Al Kash.
The album rip was taken from Vinyl at 160kps and includes back and front LP artwork, along with 2 bonus tracks recorded live by the recently reformed Blackfeather.
.
Track Listing
01 - Pineapple
02 - Gee Wilkers
03 - Own Way Of Living
04 - Red Head Rag (Instrumental)
05 - Mama Roll
06 - Get It On
07 - Boppin' The Blues
08 - Lay Down Lady
09 - Boppin the Blues (Bonus Live 2007)
10 - Medley (Bonus Live at Musicland 2008)
.
(20/03/2010)
Sorry - album just realeased by Aztec Music. Please support them
...
Posted by AussieRock at 9:50 PM