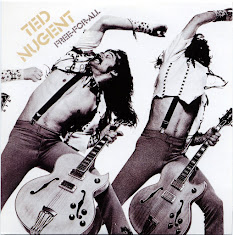 Ted Nugent's decision to go solo proved wise. By the time of his August '79 cover story, nearly all oi his Epic albums had gone platinum. 1979 alone produced two million-sellers: Weekend Warriors and Double Live Gonzo, one of the most successful concert albums in CBS history. Nugent released four more albums on Epic before signing with Atlantic in 1982 tor Nugent.

Ted Nugent tours a city the way Godzilla toured Tokyo. He plays very fast, very loud. people come to my concerts just to lose weight," he huffs. I tell 'em to sit up real close - makes their ears bleed; it's good for them. One time a pigeon - and this is true - a pigeon flew in front of my speakers and just literally disintegrated - man, it just melted! "

Nugent, a native of Detroit, was born in 1949. For ten years he led his bands - various incarnations of the Amboy Dukes - on legendary marathon concert campaigns, mostly through the Midwest and South. He pushed himself and his musicians to the limit, blitzing town after town and leaving behind him a wake strewn with ransacked auditoriums, shell-shocked audiences, wasted groupies, cackling critics, and disfigured vehicle codes. 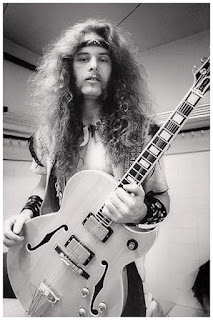 Ted's attire for these occasions included loincloths, animal pelts, teeth necklaces, war paint, and feathers. Regular features of the concerts included death-defying leaps from amp stacks, lectures against the hazards of drugs, the exploding of glass globes with his instrument's feedback, and open invitations to local hotshot guitar players to bring their axes up onstage and get slaughtered. Ted is a showman, and his fierce guitar duke-outs with Wayne Kramer (of the MCs), Mike Pinera (lron Butterfly, Blues lmage), and Frank Marino (Mahogany Rush) scored big with concert fans.

Ted is tall, and his lean, muscular physique and wild lion's mane of hair make for an imposing presence, to say the least, even without the snakeskin cowboy boots, the chipped-tooth grin, or the crazed stare. He is an outdoorsman who loves to hunt, and when he's in a wilderness area he often tracks, shoots, guts, and cooks his food. He favours the bow and arrow and decorates his home with the heads and antlers of his kills. He's also a collector of shotguns and a long-time member of the National Rifle Association: "l support everything they stand for," he affirms. He is especially proud of his efforts to help a group of hunters that successfully established new breeding grounds for the now plentiful wood duck, once an endangered species. 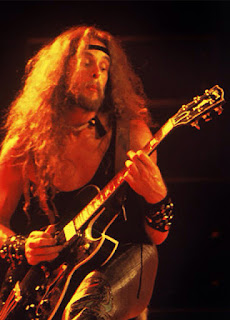 Nugent owns several souped-up, off-road vehicles, and he likes to go crashing over war-zone terrain, fusing together the vertebrae of hapless passengers. One four-wheel hot rod has an engine and suspension engineered to his own specs. It's equipped with a two-and-a-half-million candlepower light beam array on top. If I signal to someone to dim their lights," Ted says, 'the son of a bitch better dim them - otherwise l'll fire up those suckers on top and run him off the road. you can't look at those lights; it's like looking at the sun."

Looking at the sun is what Ted Nugent's image is all about. He is not one of the more self-effacing people you'll ever meet, and his descriptions of himself are reminiscent of Mike Fink, a mangy, likeable Disney river rat who once bragged to Davy Crockett that he could outeat, outdrink, outshoot, outfight, outcuss, outrun, and outtalk any man alive. "It is amazing, ain't it?" says Ted groping for undepleted superlative! and referring to his dazzling speed on the guitar. Concerning his phrasing, he beats around no bushes: "l would say I've got the best phrasing of any fucking guitarist in America." And commenting on his songwriting skills, he says, Sometimes I ask myself - have I the right to be this good?"

Nugent stokes himself up with so much hot gas that he threatens at any moment to inflate like a Macy's thanksgiving Day Parade balloon. But like the Cassius Clay of old, he has more than enough talent, savvy, and guts to back up the talk, and enough tongue-in-cheek humour and flair to avoid self-parody. 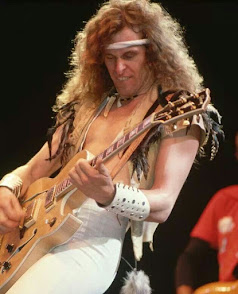 The weapons, Indian getup, guitar shootouts, howling feedback, dead varmints, and kick-butt concerts all add up to what Nugent describes as a lifestyle that has attracted as much press coverage as his relentless blues-rock boogie music, maybe more. But on more than one occasion Ted has complained that editors often extract all comments from his interviews except those  that heighten his image as a mad-dog guitar savage. "They only want the crazy stuff,', he said in a 'Creem' magazine article. "I'm human. I'm intelligent. I know what's going on."

When Ted travels he takes the time to catch the chauffeur's name, to compliment the waitress, to thank the bellboy. A polite Ted Nugent may appear to be a contradiction in terms, but he is quite capable of transcending his image. He knows all about his reputation - he's been refining it and living it for 15 years. Sometimes he reveals his human side, perhaps articulating newly acquired appreciations of home and kids; other times he chucks huge globs of gonzo-speak at the rock music press, playing the bad hombre role to the hilt and relishing the outrage he causes among "serious" critics. In either situation he chooses his words carefully. 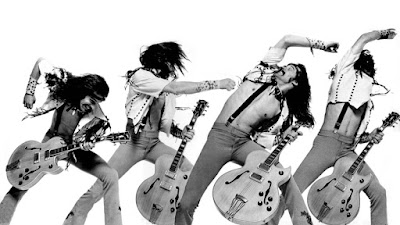 The up-yours cockiness that endears him to his millions of fans also causes some people to assume that he is insensitive, a bore, or unkind. In much the same way, his brain-damage volume levels and let's-boogie stage raps make it easy for critics to overlook his musical talents, which are considerable, or his approach to the onstage manipulation of feedback, which is almost scientific. Besides, he's right about the speed - it is amazing. Though it sometimes sounds like he foregoes a guitar pick in favour of a ball peen hammer, he actually employs a number of innovative techniques, such as bending a string up to one pitch and then sounding a second note by slamming his pick into the string at a certain fret. He constantly and skilfully manipulates the controls on his guitar to increase the dynamic contrasts between volume levels and various tones, or to approximate bowed effects. And aside from the suicide speed runs, he can also play provocative melodies, drawing from influences far more diverse than his usual concert barrages would suggest. 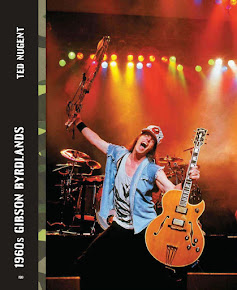 Ted suffers almost total deafness in one ear, a self-inflicted casualty of too many concerts at too-loud volumes ("but it's well worth it, man"). But again, there is more to him than destructo decibelmania. Consider his guitar. Ted's Gibson Byrdrand - a jazz model, of all things - was invented over 20 years ago. It has long been his trademark and is essential not only to his tone, but to his technique as well. Its construction differs substantially from the guitars used by almost every other high-volume rocker. For one thing it has a hollow body, which necessitates a trapeze tailpiece that hinges at the bottom rim, rather than the bolt-on stop tailpiece.

The hollow body helps encourage the feedback for which Ted is famous. And the several inches of string length between the bridge and tailpiece allow him to manipulate the strings behind the bridge, changing the pitches of various notes for the air-raid siren efiects usually associated with the Fender Stratocasters of Jimi Hendrix, Eddie Van Halen, and Ritchie Blackmore. The same technique permits him to embellish arpeggiated chord progressions with melodic note-bendings similar to those of a pedal steel (e.g., the intro to "Alone," on the Stafe Of Shock LP). Ted has demonstrated the Byrdland's suitability for rock, adapting it to things its inventors wouldn't understand and probably wouldn't like. He gets strat-like vibrato effects with no vibrato, and without the tuning difficulties that so many vibrato users seem to complain about. All in all, it's an inspired example of mechanical improvisation.

The Motor City Madman goes way back to the Lourdes, a Detroit group he played with at age 14. He went to Chicago and formed the Amboy Dukes shortly after acquiring his first Byrdland in 1964, returning to his home base in Detroit. From there the Dukes hit the road, slugging it out for 150 or 200 concerts each year for much of the next decade, and recording nearly a dozen LPs, including 'Survival Of The Fittest', 'Call Of The Wild' and 'Tooth, Fang, And Claw' (an album that I'd like to post in the near future). 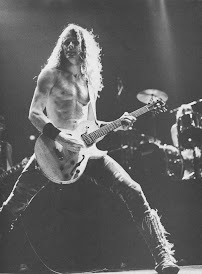 An indefatigable performer and road stormtrooper, Ted has been playing essentially the same style for 15 years. He was a pioneer of feedback, equipment destruction, playing with his teeth, and other hallmarks of late '60s rock guitar, and it is ironic that worldwide acclaim came relatively late. His early career was marked by assorted ripoffs, financial mismanagement, and little notoriety outside the Midwest and South. His "Journey To The Centre Of Your Mind" made it to #8 on the national charts in 1968 (though Ted earned no money from it), and some of the Amboy Dukes albums crept up toward midpoint on the national Top 100. In 1971 Ted began to make money and bought a farm.

In 1975, Nugent dumped the Dukes, went with new managers and a new record company (Epic), released the selftitled Ted Nugent LP (see previous post), and turned his career around. 'Free-For-All' was released in '76, followed by 'Cat Scratch Fever', which hit it big the following year. 'Double Live Gonzo' came out in 1977, and it was followed last year by 'Weekend Warriors'. All five Epic albums have turned platinum - a million units sold or more. From these LPs came several hits, including "Stranglehold," "Dog Eat Dog," and the huge "Cat Scratch Fever." 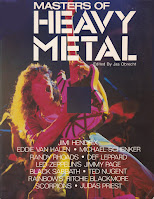 Ted increased his touring coverage, performing successful gonzolectomies on Japanese and Hawaiian audiences in '78.  'State Of Shock', released in May 1979, and Scream Dream, 1980 didn't chart as well but were still on the mark.  [Extract from Masters Of Heavy Metal, by Jas Obrecht. Quill Books 1984. p 92-95]

This post consists of FLACs ripped from my pristine vinyl and comes with full album artwork for LP and CD plus label scans.  This is another favourite Nugent album of mine (every track packs a punch) and is a must for any fan. The late 70's was definitely a prolific period in Nugent's career and everything he produced turned to gold. As a bonus I have included live versions of "Free For All" and "Dog Eat Dog", which provide an insight into just how good Nugent was on stage. 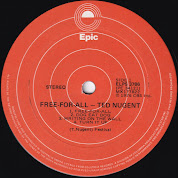 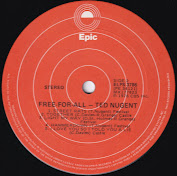