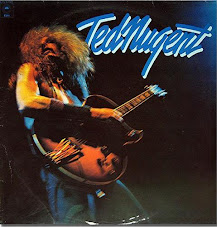 The Motor City Madman was self-styled. when a career with Detroit garage band the Amboy Dukes started to stutter in the early 1970s, Ted Nugent invented a cartoon personality for himself as a wild outdoorsman with guitar chops. He challenged other axe heroes - Wayne Kramer of MC5, Frank Marino of Mahogany - to go mano a mano in electric sparring contests. The caricature, though a gimmick to boost his profile, masked a man of sincerely held beliefs. Most of the rest of the music industry might not have shared them.
Nugent was a member of the National Rifle Association, he hunted, and disdained drugs and drink - but he wavered not in his convictions: his autobiography was titled God, Guns & Rock 'n' Roll. The music that he captured and skinned was pure bred heavy metal; he was a proponent of the "If it's too loud, you're too old" philosophy. At 50 years and then some, Nugent is still cranking up the volume. [Extract from The Book Of Rock by Philip Dodd, 2001. p322] 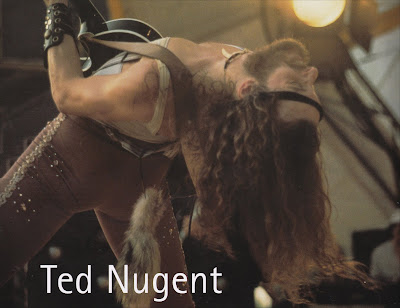 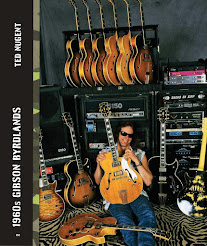 The model was co-designed by two first-call '50s session players, Billy Byrd and Hank Garland, and was aimed primarily at jazz, country, and dance-band guitarists of the day. In addition to being fully hollow rather than semi-hollow like an ES-335, the Byrdland is also a short-scale design at 23.5 inches, which takes a significant chunk out of the standard Gibson 24.75 inches (or 25.5 inches for many full-sized jazz guitars of the day); it also has a slimmer, narrower neck than usual.
Despite the seeming incongruities in the guitar's design, Nugent applied his '60s Byrdlands to an unholy maelstrom of metalesque exploits. In the late '60s and early '70s the Detroit rocker ramped up the fury with the Amboy Dukes and launched his solo career proper with the Ted Nugent album of 1975. His first real commercial hit single was "Stormtroopin" from this self-titled album, while his best-known hit, "Cat Scratch Fever," appeared on the 1977 album of the same name. 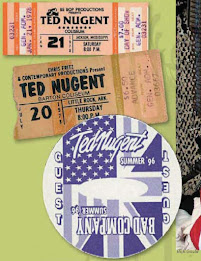 Although Nugent used a little early-'60s tan Tolex Fender Deluxe amp, cranked to the max, to record the single, as Aspen Pittman notes in his The Tube Amp Book, he is known for playing through massive stacks on the live stage, piling up Twin Reverbs in the early days, then Marshalls, and, most recently, Peavey 5150s.
Except for a dalliance with PRS, the Gibson Byrdland has remained a constant with Nugent-and
if we can't find any documentation for the claim of "loudest guitarist on earth," we can probably concede the Motor City Madman the title of "loudest guitarist on a hollow-body archtop" with few reservations. [extract from Star Guitars, 101 Guitars That Rocked the World by Dave Hunter]
This post is very special to me as is my vinyl copy of his debut self-titled album as a sole artist. Side-A is definitely the better side although the B-Side kicks off with "Snakeskin Cowboy" and the popular "Motor City Madhouse" which have been almost signature tracks for Nugent's charisma.  Of course full album artwork is also included with the FLAC audio files. As a bonus I've taken the liberty of including a live rendition of "Stormtroppin' which was recorded for the King Biscuit Flower Hour in St. Antonio,Texas in 1977.
Hope ya enjoy Ted's ripper debut and if your patient, there's plenty more of his albums still to come - a Free For All so to speak  LOL 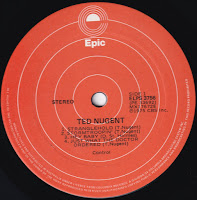 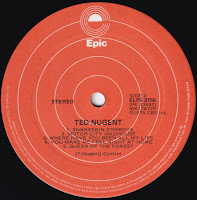