Before things get too serious here at Rock On Vinyl, I thought it might be fun to post a song / album at the end of each month, that could be categorized as being either Weird, Obscure, Crazy or just plain Korny.. 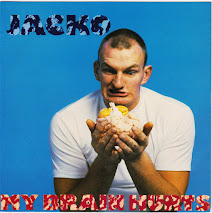 With the start of the 2021 AFL season just around the corner, I thought it appropriate to post something 'footy' related for this months WOCK on Vinyl, and who best to feature but one of the craziest yet best loved ex-footy players, turned music celebrity.

Yes, I'm talking about Mark (Jacko) Jackson, a former AFL player for St Kilda, the Melbourne Demons and Geelong and commonly referred to as the 'Clown Prince of Football' - hence Wacko Jacko!  Jackson made a splash outside the field with a few records in the mid-80s. Following his retirement from football, Jacko used his fame to launch a singing career. His first single “I’m An Individual” was a number one hit (see previous post).
But his not so successful single “My Brain Hurts” (K-9788) didn't do so well, however I think it's worth bringing this Raw Prawn release to your attention, as it ticks all the boxes for this WOCK On Vinyl's posting: Jacko was Wacko and definitely a little Crazy, the song is Oh so Korny and the single is definitely obscure (as it bombed, so there would not be many copies in circulation).

Nevertheless, Jacko went on to greater fame as the guy in the Energizer Battery advertisements, which were a stroke of larrikin genius back in the day, and amused the Americans no end, even though they had no idea about Jacko's footy heritage - he was just a crazy Aussie. Funny how things pan out hey. 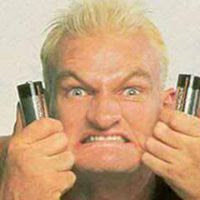 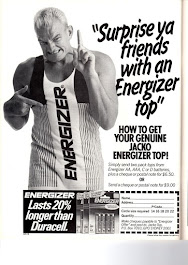 Jacko has also appeared in various television sitcoms and movies – one of the most notable as a survival expert "Jetto" in the short lived action-adventure series The Highwayman (1988) and a U.S  TV series called Signal One – as well as being on talk back radio and in various children's programs and talk shows. During 2005, Jackson embarked on a tour with author and renowned criminal Mark "Chopper" Read. In 2014, Jackson was featured on 7mate's Bogan Hunters as a celebrity judge. 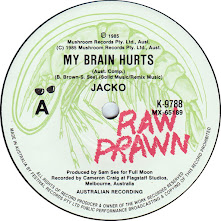 Before I close, I think I should warn you that listening to this single repeatably could have the same affect on ya brain as leaving a Raw Prawn out in the Hot Sun!
Included in this post are MP3's (320kps) taken from vinyl (thanks to Ozzie Musicman for the rip) and full artwork, along with select photos (thanks to Clown Prince Facebook Pages)
Track Listing
01 - My Brain Hurts
02 - Like I Want You
Wacko Jacko Single (16Mb)
Posted by AussieRock at 9:53 PM