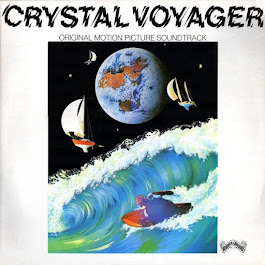 After the unexpected success of "Morning of the Earth", Albert Falzon and David Elfick were able to secure funding from the Australian Film Commission for another surfing movie. The new movie would concentrate on George Greenough a Californian knee board rider who pioneered the earliest water shots by adapting a fibreglass housing to fit his movie camera. With a surfer/traveller theme "Crystal Voyager" would track Greenough as he finished making his own sailing boat and sailed off to find the perfect, uncrowded wave!

George lives without consuming too much, recycling whatever he can. He uses his knowledge gained from observing the world around him to make dolphin shaped fins for his kneeboards and uses natural curves for the keel of his yacht. George even constructed his yacht from materials scavenged from junkyards throughout California. 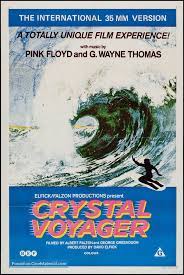 His kneeboard riding is incredible and it could be considered the forerunner of the modern 'short board' style of surfing. Alby Falson's camera captures the surfing and other adventures with Nat Young and Richie West beautifully, especially Nat's ever so smooth approach to wave riding.

It was very late in the day when Albert Falzon & David Elfick approached G.Wayne Thomas to write and produce the soundtrack for their new movie 'Crystal Voyager' 1973, reluctant at first he eventually agreed. The timing was crucial as the movie was already towards the final edit and had to be finished for release by a specific date to fit with government funding arrangements. 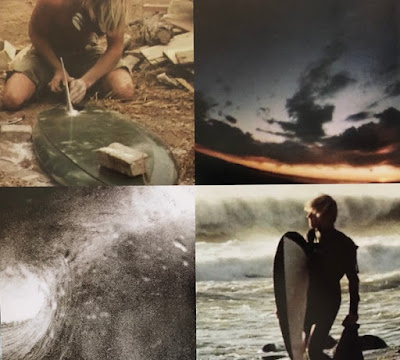 Crystal Voyager has been described as one of the "greatest concept albums of all time". In 1974, G. Wayne Thomas was presented with Best Soundtrack by the then Minister for Arts and Communications the Honorable Doug McClelland. (this Awards ceremony was a forerunner of today's spectacular ARIA Awards.)

The film became a cult hit in London's East End when it was exhibited for an amazing six month run to packed audiences. The film was also a huge hit in Australia and appealed to every budding surfie riding swells on our world renowned surf coasts. 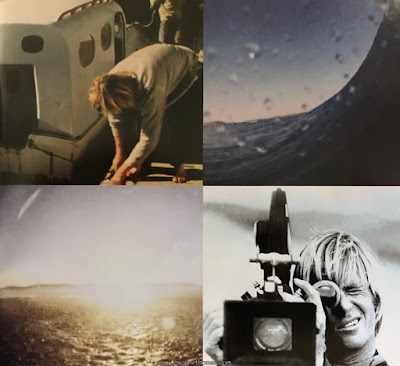 This album was released on license by PolyGram on the Warm & Genuine label which was set up by G. Wayne Thomas and singer/actor Jon English. At the time PolyGram was installing a new computer system and sales records for an 8 month period were accidentally erased. However Crystal Voyager is reputedly the highest grossing surf movie of all time due to its sustained popularity throughout Europe . 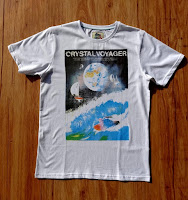 The soundtrack featured the track "Echoes" taken from Pink Floyd's 1971 album Meddle.  It was used on a 16 minute tube sequence filmed with George's head and shoulder mounted cameras, and using one of the very first 'fisheye' lenses that Greenough designed.. 'Echoes' was licensed and used in the movie sound track for no charge as long as Pink Floyd could use the movie sequence whenever they played the song 'live' on stage.

George's footage captured the audience's imagination with the visual experience of surfing in the 'tube' or 'barrel', where the powerful forces of nature create the curving of the wave. This is regarded by most surfers as the ultimate surfing experience - almost spiritual, and an almost unattainable challenge...it's the challenge that drives the desire.
Most of the film's footage was taken along the far north coast of NSW in particular Lennox Head and Byron Bay. Greenough had moved to Australia on a semi permanent basis and was known for his radical political views and eccentric lifestyle and interest in movie making. The other surfer featured in the film is Richie West who also went on to star in the "Forgotten Island Of Santosha" with Joey Cabel.
[Extracts from G.Wayne Thomas Website and CD liner notes] 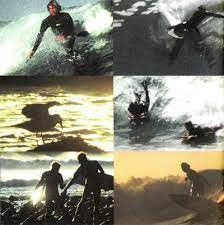 This post consists of MP3's (320kps) ripped from vinyl and includes album artwork for both vinyl and CD. This is another surfing movie which I saw with my older brother (he was the surfie in the family) at the Pix Cinema in West Geelong if my memory serves me right. I rated it a close second to 'Morning Of The Earth' which had blown me away a year earlier. I clearly remember the "Echoes" sequence and the fisheye imagery, it was mind blowing. Therefore, I am including the shortened version of Echoes as a bonus track for your full experience.
Tracklist 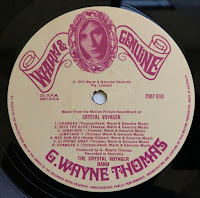 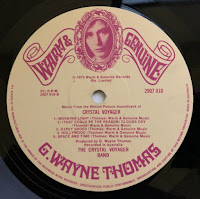