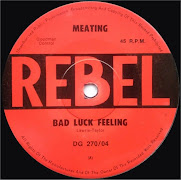 The earliest Carson recordings date from 1970. As Carson County Band, they issued a single on the independent Rebel label, 'On The Highway' b/w 'Resting Place' (August, 1970). The clattering A-side was a good example of the band's earthy Chicago blues / Canned Heat-influenced sound.
During May, Greg 'Sleepy' Laurie and John Capek, also collaborated with Genesis members Matt Taylor (vocals, harp), Tim Piper (guitar) and John 'Yuk' Harrison (bass), plus drummer Trevor Courtney, on a one-off recording session as 'The Meating'. 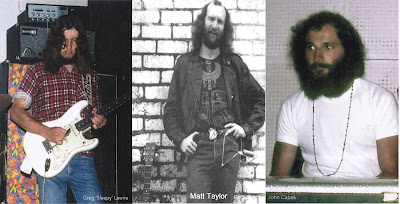 The A side is available on Raven's excellent Carson retrospective "Travelling Highway Blues" However the B side "Back Home" had never appeared anywhere else, until recently when Aztec Records made it available on their expanded release of Carson's album 'Blown' in 2016.
For a more in depth coverage of the Meating and the evolution of  Broderick Smith's band Carson, take a look at Harmonica's Riff Raff's blog
So, this month's WOCK post pays tribute to the very rare and Obscure recording made by the Meating, an the early inception of the better known blues Aussie band - Carson.
I have included both MP3 (320kps) rips (taken from the 45) and FLACs (taken from the Aztec CD) 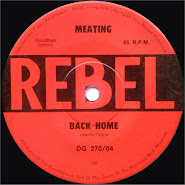