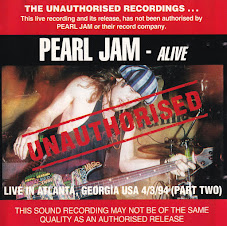 Nirvana's "smells Like Teen Spirit" and album Nevermind brought the pacific Northwest music scene into the spotlight, but it was pearl Jam's Ten and its attendant singles that assured the spotlight would stay there and focus on a hotbed of  talent that also included Alice h Chains, Soundgarden, and Sir Mix-a-Lot.
"Alive", Ten's first single, released worldwide on September 1, 1991, was key not just to Pearl Jam's breakthrough but to Pearl Jam becoming a band in 1990, bassist Jeff Ament and guitarist Stone Gossard had seen their previous band dissolve due to a drug fatality.
They recorded demos with new guitarist Mike McCready, which were passed on to singer Eddie Vedder then living in San Diego, by a mutual friend. Vedder provided lyrics and vocals for three songs, the first of which was 'Alive." That fall, Vedder relocated to Seattle and Pearl Jam were on their way. 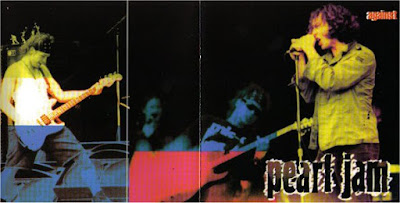 Though seen as a celebratory anthem due to its stirring chorus,"Alive" is more a painful journey of self-discovery. Vedder later revealed the song's dark inspiration, based on his troubled youth.
As a teen, Vedder learned that his father was actually his step-father and his biological father had died years before.

The second verse hints at incest, underscored by McCready's searing guitar solo. Despite its darkness, the song struck a nerve, hitting the Top 20 on both the Mainstream Rock and Modern Rock charts even though only available in the U.S. on import. [by Gillian G.Gaar]
Most major rock acts go on tour and play the same exact set every night, sometimes even repeating their stage banter verbatim like they’re reading from a script. Pearl Jam have always taken a different path. Their set list is like the complete Pearl Jam catalog on shuffle where any song can surface at any point. Back in the 1990s, it caused their hardcore fans to feverishly trade bootlegs on cassette tapes and burned CDs, but in 2000 the group began selling pristine recordings of every show. This is one of their better bootleg releases

By the end of the Vs. tour, Pearl Jam were playing at absolute peak form. This widely bootlegged live radio broadcast contains nearly all of Vs. and Ten, mixed with snippets of covers like “Angie” by the Rolling Stones and even Kiss’ “Detroit Rock City.” The show came just as news broke that Kurt Cobain was missing after walking out of a rehab facility. “Hope he’s all right,” Vedder says. “Please be all right.” 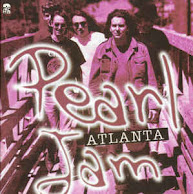 This bootleg recording is taken from an FM broadcast of Pearl Jam live at Fox Theater, Atlanta, Georgia, USA on 3rd April 1994., and was ripped to MP3 (320) format from my Grapefruit Australian CD release. This concert is also available as "Atlanta" from the Kiss The Stone label.
Full album artwork is included plus some choice photos taken from the Kiss The Stone release.
Note that this release features only half of the Atlanta concert set list while the other half is available on the Grapefruit release entitled 'Daughter' (regrettably, I have yet to source this one). Bummer !
.
Track Listing
01. State Of Love And Trust 4:09 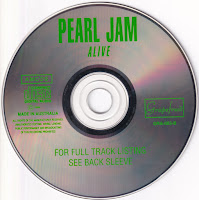