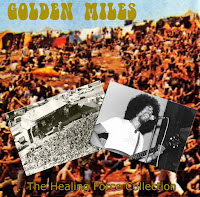 The legendary Healing Force was something of a 'supergroup', and its history intersects with several other important bands of the period, notably King Harvest and Friends. They made only one single, but it is still widely regarded as one of the flagship Australian progressive rock releases of the early '70s. All the members had a wealth of experience - Pryor had been the drummer in the The Twilights; Charlie was from Nova Express; Logan was from The Rebels and Wells had been a member of Perth's prog-rock pioneers Bakery.

The first lineup formed late in 1970 and began playing in Adelaide over the '70/'71 Christmas period. They played at several early rock festivals including Launching Place. In April 1971, they signed with Robie Porter's new Sparmac label. Midway through 1971, they expanded to a five piece with the addition of John Pugh (ex-18th Century Quartet) on guitar.

In July, they released their brilliant single. The 'A' side, "Golden Miles", by Lindsay Wells, is one of the most admired Australian progressive rock recordings of the period, and indeed rock historian Ian McFarlane named his magazine after it and rates as the best Australian progressive recording of the era. It was deservedly successful and spent nineteen weeks in the Melbourne charts, barely missing out on entering the Top 30. It features rippling Hammond organ by Logan with a beautiful melody line and a dramatic chorus, highlighted by the soaring vocals of the late, great Charlie Tumahai. The flip-side, another Lindsay Wells composition, was heavier but almost as good. It has never been commercially released but it has been included on the first CD in the trade-only CD-R compilation series Obscured But Unscarred. Just before the single hit the charts, Charlie quit to join Chain and the group returned to a four piece. Pryor left soon after and was replaced by Joe Tattersall (ex-Barrelhouse), but then Lindsay also left and the band fizzled out. 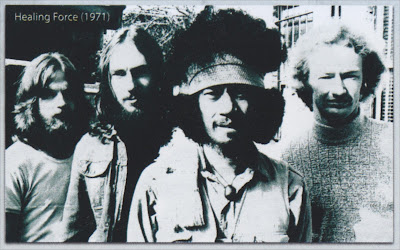 In November 1972, Healing Force reformed with Logan, Pryor and Pugh, plus newcomers Gus Feniwck (bass) and Mal Capewell (ex-Company Caine) on reeds. This version performed at the Sunbury Pop Festival in January 1973, with Charlie rejoining especially for the show. One track from their set, "Erection", was included on the Mushroom Records Sunbury '73 album. They disbanded shortly afterwards, during preparations for a planned LP, leaving their considerable promise sadly unfulfilled. 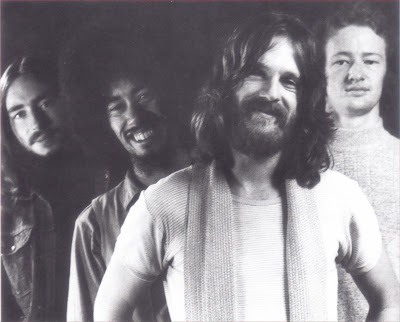 - Mal Logan had a short stint in The Dingoes, filling in for Chris Stockley during his enforced absence from the band (he had been shot and wounded at a party in late 1973), after which he joined The Renee Geyer Band.

Tumahai and Logan both joined the short lived Alta Mira in 1973, then Tumahai briefly played with Friends before joining Mississippi. He travelled to the U.K. with them and stayed there after the group returned to Australia. For most of the later 1970's he was the bassist and co-vocalist in Bill Nelson's 'Be Bop Deluxe'. He returned to New Zealand in the eighties and joined The Herbs, and also did much work on behalf of his local Maori community until his sudden and unexpected death from a heart attack in December 1995.

Lindsay Wells headed back to Perth and played with popular local band Fatty Lumpkin, then returned to Melbourne and joined Ray Brown's One Ton Gypsy and a later lineup of Blackfeather. He eventually returned to Perth, where he remained active on the local blues scene for many years.

"Erection" was included on Mushroom's Sunbury 1973 live album. This was recently compiled into a 2CD set with highlights from Sunbury '74, released on Michael Gudinski's Liberation Blue label. These recordings are of enormous historical importance, but the recent CD must be strongly criticised for its shamefully poor quality. The second CD of Sunbury '74 recordings has clearly been transferred directly from LP, without any attempt at noise reduction, and many of the tracks are marred by very obvious surface noise. In an age when high-quality, low-cost digital recording systems are available to even domestic users, it is deplorable that that Liberation has chosen to released such an obviously sub-standard product to the public.

Go Set Articles
(The following feature articles, which provide a deeper insight into the band and their eventual demise, were published in the iconic Aussie Rock Magazine 'Go Set" which was published from 1966-1974, thanks to Woodynet for the scans)

Healing Force have built up quite a following - this week they put down their first single and this should greatly strengthen their grip as Melbourne's most promising group.

Pictured above are drummer Laurie Pryor and guitarist Lindsay Wells during a recording break.
Lindsay write their forthcoming single (which is not yet titled)  when he was with Perth's Bakery and although it was not recorded at that time, it  became very popular when a tape of it was played on Perth radio several times. In fact,  the station voted it the most popular song of the year.
Healing Force are recording the single for Melbourne's Sparmac label, which is half-owned by singer Robbie Porter.
Sparmac are also due to release "Eagle Rock" this week, the debut single (by) Daddy Cool. An album by that group should follow quite swiftly.

Australia's third stereo single became available last week when Healing Force released their first record, Golden Miles.
Since they began in Melbourne several months back, Healing Force has been accepted as the best new group to emerge from that city - and they're hoping that the new single will be an extension of the attention they've attracted through live appearances.
During the next two weeks, Healing Force will also record their first album for the Sparmac label - one of the directors, singer Robie Porter, is in Australia this week from Los Angeles, and he'll produce the LP from the group's original material.

It's sad that this record looks to be an epitaph for Healing Force instead of the beginning it was to be. Healing Force were emerging as the next major force in Melbourne Music. They impressed at each performance with clean complex, highly evolved music, a little like Spectrum but with separate, individual emphasise.
On "Golden Miles" you can hear that crisp, rhythmic, organ-based sound around the bluesy vocals. You can hear the interesting, original style they've evolved.
The song has a lot to hold your attention, including a memorable melody. Same holds for the other side, "The Gully". The fact that their style is fairly subdued, low-keyed and flowing, instead of being ear-catchingly dramatic, will hinder the air-play of the record. A fine local record you should not miss.

There's a new Healing Force, resurrected from the "Golden Miles" group. They had problems with their equipment so it's possibly unfair to judge them but this group hasn't the same impact as before, not the same interesting organised flow.
They've retained the characteristic rhythmic style but that's really all there was to the performance.
.
This post consists of MP3's (320kps) sourced from their Sparmac 45, GTK film clips and the LP Garrison: The Final Blow - Unit 2.    Full artwork and Go Set Articles have also been included.
One can only wonder what Healing Force would have produced if Robbie Porter had followed through with his plans to record their debut album. Whether it was unrest amongst the Healing Force camp at the time or lack of funds on the part of Sparmac, one can only speculate why the LP never eventuated. However, the following compilation of their studio and live material is the closest thing that is available, thanks to a good mate Micko. 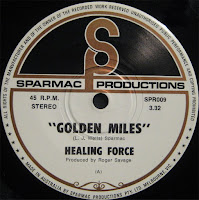 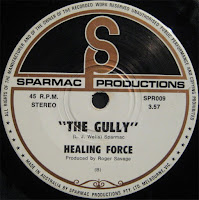