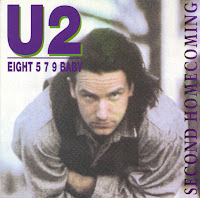 This is a band approaching the heights of acclaim. Everything they've worked for during  the long tours of the early Eighties is finally happening. Before they ever touched the shores of America, Bono was cheekily bracketing U2 with Elvis, The Beatles and The Stones. Now it's everyone else that's doing the New Beatles talk.
Television commentators chatter breezily about a a return of Sixties social concern. A New York ticket vendor compares the appetite of his customers with that of "Beatlemaniacs".

The accolade of Time's front cover puts them up there with The Beatles, The Band and The Who.
The Joshua Tree album seems set in an essentially American landscape, having completed the first leg of their Joshua Tree Tour.  The second leg takes place in European arenas and outdoor stadiums running from late May through to early August, starting at the Stadio Flaminio in Rome on 27 May. The final show of the European leg is at Páirc Uí Chaoimh in Cork on 8 August. 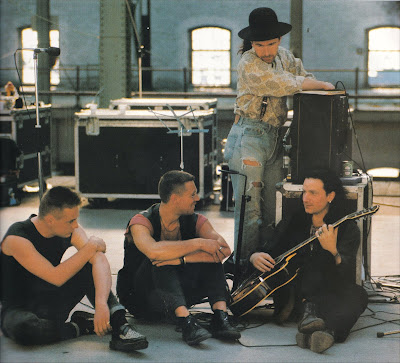 'The Joshua Tree Tour' sold out stadiums around the world, the first time the band had consistently played venues of that size. The Joshua Tree and its singles had become huge hits and the band had reached a new height in their popularity. Tickets for shows were often very hard to get, especially on the first American leg when they only played in arenas.

This bootleg was recorded on July 10, 1987 at Feyenoord Stadium, Rotterdam, Netherlands and is one of the best audience recordings available from this tour.

This post consists of MP3's (320kps) ripped from my KTS CD (#2 in a set of 3) and is tagged as being an audience recording.  There is certainly evidence of audience participation in the background (clapping, singing and the occasional dialogue) but the quality of the recording is close to Soundboard quality.  Full album artwork and concert/tour related photos are also included.
The track listing is nothing short of being a Best Of U2 featuring all of my favourite tracks - Sunday Bloody Sunday, Pride, New Years Day and Bullet In The Sky. It's a pity whoever designed the back cover couldn't spell Bullet (Bullit) but I guess it is a bootleg.
.
Tracklist 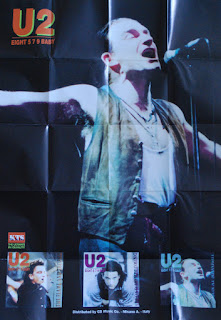