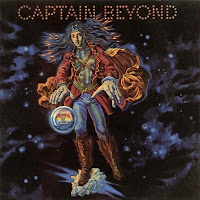 ... in the summer of 1972, standing in the record store, holding this album. Hmmm, Lee Dorman and Rhino. (I was an Iron Butterfly fanatic.) Hmmm, Rod Evans. (I was a Deep Purple fanatic.) And, who the heck was Bobby Caldwell? Johnny Winter had a drummer by that name. Was it the same one? I didn't buy the album that day, but about a week later, I did. I took it straight to a friend's house, and we had a listen. Needless to say, it just about took our faces off.
The album still has its effect. What an amazing display of power and finesse! Never before--and never again to my knowledge--has an array of diverse time signatures danced with such remarkable ease. Bobby Caldwell's highly aggressive but astoundingly tasteful drumming will stupefy you. I thought about mentioning a couple of specific spots on the album where he overwhelms me, but that's impossible because the guy never really stops overwhelming me! With today's preoccupation with trying to mimic a drum-machine (an ongoing trend for almost 20 years), I wonder if anybody knows how to play drums like this anymore. 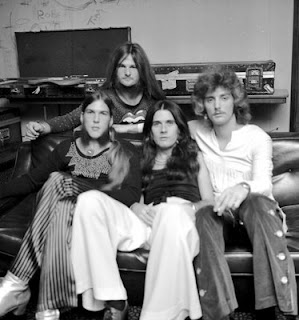 Guitarist Larry Reinhardt (Rhino) is as tasteful a player as one could ask for. We got a dose of his alluring style on Iron Butterfly's METAMORPHOSIS (a much overlooked gem, by the way). His playing is firm, to the point, and power-ridden. But, it also contains cosmic elements, overtones of otherworldliness, that I find irresistible. Lee Dorman is much underrated on bass. The power aspect of this music does not afford him the freedom to embellish with the endless variety he gave us with Iron Butterfly, but he does give us plenty of motion, along with maintaining the solid bottom needed for these driving rhythms. I've always loved the work of vocalist Rod Evans when he was with Deep Purple. Here, he is given the opportunity to really show off. His vocals are as energized as the rest of the band.

Another review points out that most of the reviews on this product page are written by us old folks. Yes, there are indeed many of us who have owned this album for 30-some years, and who are still infatuated by its brilliance. Great music stands the test of time. It rises above mere nostalgia. CAPTAIN BEYOND packs a wallop. What a combination of energy and sophistication! The music is well thought out--it's classy, but tailored to knock your socks off. If you have any idea of what it takes to make a band jell, I can almost guarantee that after the first four songs, you and your friends will be looking at each other with blank stares. "Juggernaut" does not even begin to describe this album. [Reviewer:David Parker (Burlington, Vermont United States)]


What first attracted me to this album was the 3D album cover. I had never seen anything like it before and when I listened to the album for the first time, I was completely numbed by the awesome wall of sound that came from my BOSE speakers. This album remains as one of my all time favourite LP's - so have a listen.


Please Note: I'm posting this album as single side Mp3 files for a good reason. Because most of the tracks run into one another, breaking up the original analogue experience would simply kill the magical experience. To enjoy this album the way it was originally recorded, it MUST be listened to as one long piece, without the pseudo breaks created by Digital reproductions. So ENJOY this truly 'Mesmorizing' rock experience!

The first rip was taken from a Vinyl pressing at 320kbs but has no song separation (I prefer this rip) while the NEW second rip was taken from CD in FLAC format with song separation. Also included is full album artwork for both CD and LP releases. I am very proud of my Vinyl copy with it's 3D cover (see above) and consider this to be one of my prize possessions in my record collection. I've never seen another copy like it in the 40+ years I've been collecting records. 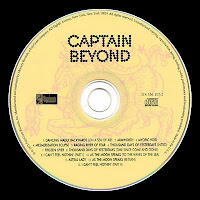